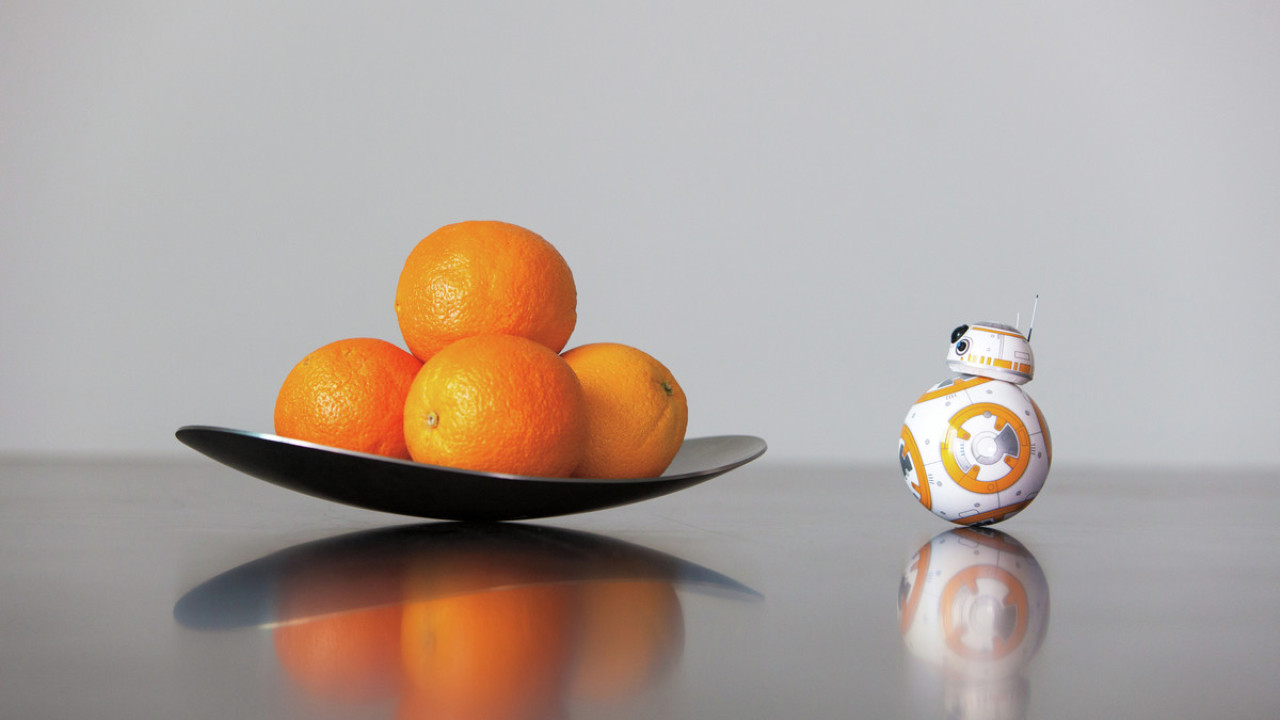 In the world of the upcoming Star Wars movie, ‘Star Wars: The Force Awakens,’ there is perhaps nothing I am more excited about than BB-8. When the little orange droid wheeled itself onstage during the Star Wars Celebration earlier this year, you could feel the palpable excitement emanating from the crowd. He was cute, he was expressive and he was shaped in a little whimsical figure-eight.

The question seemed odd. I’d spent the last 10 minutes staring at the officially licensed BB-8 droid developed by robotics company Sphero. The droid, without any specific input to his controls, bleeped and blooped his way around a little table. He seemed precious, but I gingerly picked up the robot. I could feel his little gears working in the palm of my hand as he rotated his little head to “view” his surroundings.

“He’s like a puppy!” I squealed, but I couldn’t help myself. There’s just something about Sphero’s work in this robot that brings a piece of Star Wars to life in a way I’ve never before experienced.

In developing the officially licensed BB-8 droid, robotics company Sphero had a tall order to fill. Not only did the company have to live up to the rigorous expectations of franchise owner Disney and create a robot that embodied BB-8’s canonical personality (One that Sphero helped create for the life-size BB-8 seen in the movie), it also set some lofty goals for itself.

Particularly, that BB-8 becomes the consumer entry into the world of robotics, as an autonomous and ubiquitous companion that grasps at the future of what we could have (and what Star Wars promises us).

Of course, that goal is somewhat limited by the reality of modern robotics. The idea of a companion robot implies that it has an autonomous sensibility and the drive to do things for itself. While scientists are on the forefront of teaching robots the finite aspects of human language and directions, we’re far from developing a robot that will create and manage its own actions. But that doesn’t mean that Sphero isn’t trying to imbue its robots with that spark of autonomy — both its Sphero and Ollie models have distinct personalities and scenarios designed to get people of all ages interacting with them.

But BB-8 is different. He has a face.

And, perhaps unsurprisingly, that is where the droid’s magical “humanity” is found. BB-8 turns, looks, and emotes with simple gestures designed to evoke puppeteering rather than robotics. He’s not needy or craving attention a la the Furby, but he does make little noises to let you know that he’s there and he’s listening.

But the magic lies beyond how BB-8 looks and feels — it’s also what he can do.

The practical nuts and bolts of the commercial version of Star Wars’ latest droid were explicitly designed by Sphero to be durable. The droid is molded in a hard plastic that is designed to take the occasional collision without doing lasting damage, and his little head comes flying off if he hits a wall or sustains a sharp fall. The folks at Sphero told TNW that it has rarely received warranty calls related to unexpected damage to its robots, but they’re prepared to keep a stock of heads just in case.

BB-8 is prepared for damage, but he sure won’t like it. The first thing apparent when booting up a fresh BB-8 is that he is pre-programmed with strong opinions. Although he is essentially a ball with a little head, he communicates his feelings in finite ways when prompted by the Star Wars app (or when reacting autonomously).

BB-8, when prompted to agree with something, will lean over slightly to acknowledge your presence. When he is unable to perform a request or otherwise directed, he will swerve in a left-right motion to indicate disagreement or confusion. When he faces a non-threatening collision or detects an increase in speed consistent with a drop, he will let out a very surprised beep. And when he loses his head or is put in similarly unfavorable conditions, his body will turn red in anger.

The accompanying BB-8 app, which is available at launch for both Android and iOS (with Windows coming soon), helps you articulate BB-8’s feelings and movement through tapping on feelings or voice input. For example, if you put BB-8 in ‘Listen’ mode and yell, “It’s a trap!” BB-8 will zoom away quickly (at a top speed of five miles per hour) in a panicked-appearing escape.

He also exhibits spontaneous movement and sounds, whether he is directly controlled via the app or in the autonomous “Search mode,” where the droid will simply bug off and explore his surroundings on his own. It certainly helps contribute to the magic of BB-8, allowing users to fill in their own imaginations and suspend their disbelief.

BB-8 also comes with an AR feature, creating the famous holograms from Star Wars with the app. Users can record their videos and then “project” them onto BB-8, which is a fun little novelty.

Practically, though, BB-8 is available in relatively short bursts. His battery life is roughly 60 minutes, so he’ll have to go back to his wireless charging station quite a few times if you’re keen on all-day play. But Sphero’s promised frequent update schedule means that BB-8 will continue to pick up new tricks over time.

A Companion at Work

I’ll be honest: it’s hard not to love BB-8. He’s adorable, he’s whimsical, and he’s a design-worthy successor to the other droid of everyone’s hearts, R2-D2 (Sorry, C-3PO, but you were outmatched). The miniature consumer version of him is packed with the same personality that will likely steal the scene in ‘The Force Awakens’ more than once.

That depends on a lot of factors, particularly your love for the Star Wars franchise and also how quickly you tear up in the sight of cute little androids. In my interactions with BB-8, I found myself suspending my disbelief in his presence. I wanted him very much to be real, and actually be sassy with me. I expect he’ll be a real charmer around young children, who will likely awe in his presence if he rolls his way into the home.

What is more exciting to me is whether Sphero can deliver on its promise of bringing a consumer companion robot that evolves thoughtfully and can eventually become autonomous. The company spoke vaguely of the updates that will come to BB-8 in the near future: particularly programmability, which will allow users to construct full routines for BB-8 to do by himself. But I’m looking forward to seeing whether different BB-8 droids differ in personality when they’re next to each other, whether the droids can talk amongst themselves, or whether BB-8 will be able to immediately respond to environmental actions like the sudden playing of music.

The more the company commits to updating BB-8 and showing off the latest tricks the robot can do, the less likely that it will gather dust in his docking station.

BB-8 is available Friday for $150 via Sphero’s approved retailers, including Amazon, Best Buy, and Disney stores.