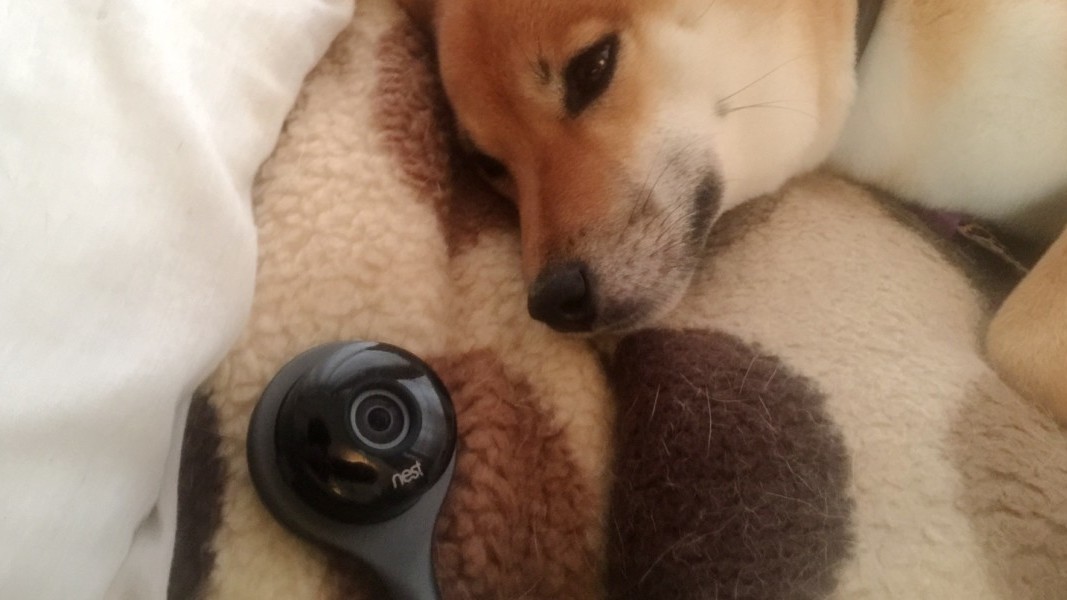 She’s a beautiful shiba inu dog – smart, tenacious and loving, and she lives with me. But sadly, her tenacity got the best of her last week when she stole and ate some corn cob and needed surgery to get it removed from her stomach.

To help her recuperate, we set up a nice little bedding area, fenced off, where she wouldn’t get into trouble or overstrain herself while she healed.

Arashi’s ordeal happened in the same week as I received a Nest Cam to review, so I decided to put it to the test as a pet monitor.

Anyone who tried the old Dropcam devices (acquired by Nest in June 2014) will know what to expect from the physical appearance of the Nest Cam – it looks very similar. It’s stylish enough to blend into most home surroundings and it’s smaller and heavier than I thought it would be.

It comes with a sticky pad to fix it to a wall or ceiling if you wish, but this requires some planning ahead, as you’ll need to contend with the USB power lead, which will need neatly tucking away somehow as it snakes its way to the nearest mains power socket. With this in mind, I just used it standing upright. Even in the unconventional position of sitting on top of a bowler hat on a shelf (which just happened to be the ideal place from which it could observe Arashi), it held steady thanks to its weight.

Nest Cam’s interface is the same iOS or Android app you’ll use if you own the company’s thermostat or smoke detector, and in fact the app made me feel like I was missing out by not having more Nest devices set up. If you do, you’ll benefit from integrations like automatically recording a video clip when smoke is detected.

If you have a Nest Aware subscription, starting at $10 per month, you can look back through an archive of video clips of up to 30 days. The subscription also enables features like ‘activity zones’ that restrict motion alerts to a small area of the camera’s field of view. Unfortunately, you’ll need to use the desktop browser-based Web app to do this, and it requires Flash to be installed (ugh).

The Cam works well as a pet monitor. By default, it shows a wide-angle view of the what’s in front of it, at 1080p resolution. Slightly freaked out that it was recording me sitting on my sofa working, I used the ‘Enhance’ feature to zoom in on Arashi’s pen. This refocuses the camera so that it only records that part of the room. That way, anyone else with my login could keep an eye on Arashi without getting a view of me tapping away on my computer.

When I had to go upstairs or into the kitchen, I’d keep the Nest App open on my phone to monitor Arashi. If she tried to take my absence as an opportunity to escape from her pen (shibas are natural escapologists), I knew I’d be able to tell her off using the app’s microphone, which allows you to speak out of the camera using your phone’s microphone.

Arashi has been snoozing a lot during her recuperation, so I wanted to make sure I was notified when she woke up. I set up push notifications for movement detection (you can also set up sound notifications). Even when I was out of the house, I’d know she’d woken as my Apple Watch tapped my wrist to let me know. You can get normal notifications on your phone if you don’t have a smartwatch, or course.

If I missed the movement (generally just Arashi getting up to have a shake and a stretch before going back to sleep), I opened the ‘Highlights’ section of the app. That stores short video clips from the time of the alert, so you can see what happened.

Used to its full potential, Nest Cam could be a full home or small business security system. You could set up multiple cameras around your house and monitor them from your phone. Nest goes further than that though, it markets the Cam as a device to keep running all the time.

At its press launch in June, the Cam was presented as a camera you could run all the time to effortlessly capture important family moments. Didn’t get your phone out in time to record your baby’s first steps? Don’t worry – Nest has them stored on its servers!

Nest may be part of that many-tentacled techtopus Alphabet, but I’m not going to suggest there’s an Orwellian plot to monitor the whole population here. Still, leaving the Cam running all the time did make me feel just a little uneasy. I wasn’t doing anything untoward, but I still felt I had to be on my best behavior and not relax – I was potentially being watched.

In reality, it’s highly unlikely anyone other than the people you live with would ever be watching you (Nest plays up the security of its cloud platform), but even then the idea of always being ‘spied on’ in my own home, even by my own family, is enough to put me off trying everything the Nest Cam has to offer.

There are plenty of choices if you’re looking for a home security camera. We’ve previously reviewed the Canary, and just yesterday we highlighted the Butterfleye.

Personally, I’ve used the Withings Smart Baby Monitor in the past. I don’t have any children but it worked well as a pet monitor. Nest Cam is a cut above the Withings device. Its industrial design, the software, the image quality, cloud-based recording (which admittedly won’t be within everyone’s comfort zone) – this is a solid choice for keeping an eye on your home and I’ll be buying at least one.

I won’t be using every feature it has to offer, but as a pet monitor and home security camera I can plug in and use as needed, the Nest Cam has won me over.

As for Arashi? She’s recovering nicely – but we’ve banned sweetcorn from the house.