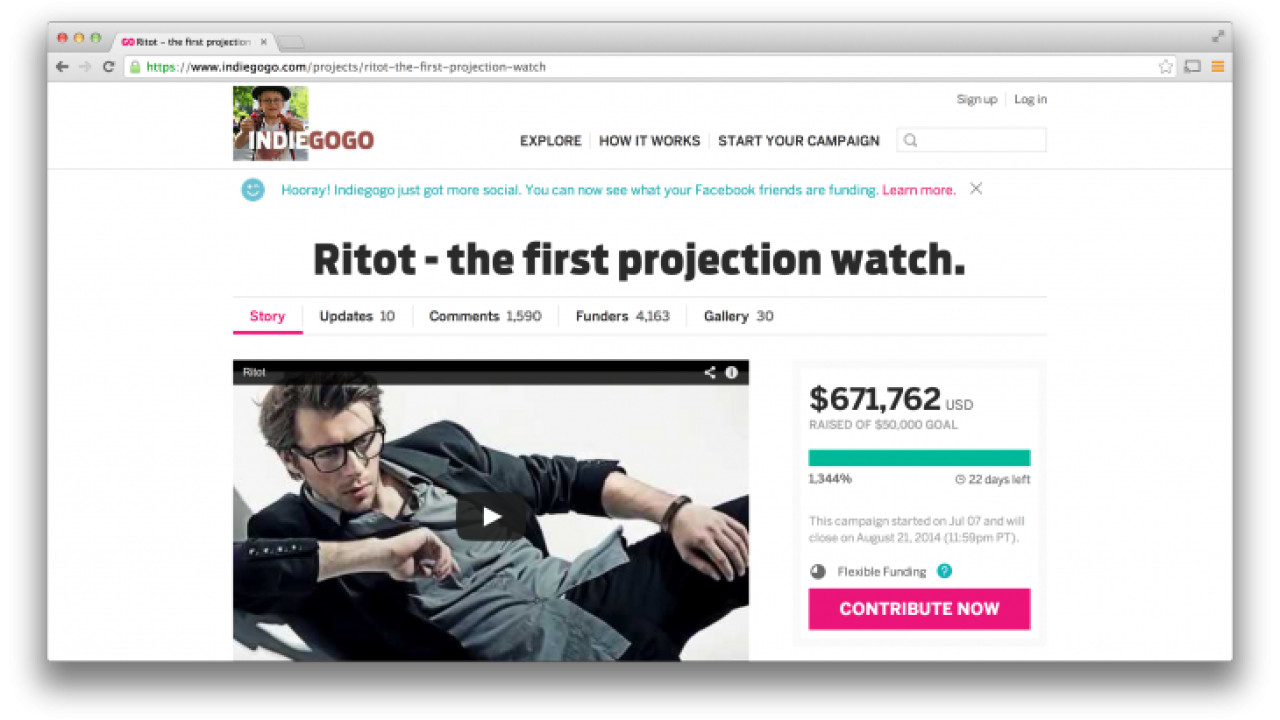 Last week, we cast doubt on the Ritot projection watch Indiegogo campaign, which we had previously written about, after learning more about the technical hurdles and shifting identities behind the project. In spite of growing concerns from backers, the campaign has continued to raise money, surpassing $750,000 without a working prototype in sight.

While digging for information about the project, we offered the Ritot team a chance to defend their work. Founder Michael Medvid has promised to share more detailed technical information with backers later this week, but in the meantime, we’ve published the entirety of his responses to our questions below.

After reading Medvid’s answers, we remain skeptical about the overall feasibility of the project and cannot recommend it as a safe crowdfunding investment. Even if the projection watch turns out to be technically possible, the likelihood of shipping the device by January 2015 as promised seems extremely low.

Indiegogo, for its part, maintains that Ritot is in compliance with its terms of service.

TNW: Why did you change your names? Tell us more about the reasons that political upheaval in Ukraine meant you changed your names?

Medvid: We had changed our names and country of the project indicated the United States because we thought that people would not trust our team because of all the recent events in our country. It was a big mistake, but we have decided to be honest with our contributors and explained the real situation almost immediately after the launch of our campaign.

What stage of development are you at? What stage were you at when you launched the project?

Before the launch of our campaign, we have consulted with several developers companies to be sure that our project is actually implemented. But we are talking honestly in our campaign that we are now on the initial stage of development. Now we have selected the components to show our working prototype. There is still a lot of work ahead, but we are moving very fast, in few days we will release our second update with the technical information in which we will tell about our technology.

Are you confident that you can deliver the product as promised by your estimated ship date?

We still have a lot of work, and we will do our best to move as fast as possible. That’s why we didn’t wait till the end of our campaign, and started development right now. But all of us sometimes pass unexpected situations, even such a large project like Pebble had delays. The main thing that I can tell you that we will meet all our commitments, even if there will be some delay.

How will the projector adjust for the different angles of the hand?

We’ll talk about this in our next technical update which should be released in few days. We will definitely send it to you and you will get the answers to all your technical questions.

Do you have any connection with San Jose or are you entirely based in Ukraine? If so, which city?

Our company, team and engineering company is located in Ukraine, but we have a virtual office in San Jose.

Is an engineer still attached to your project?

We have a partner company that handles developing and manufacturing. Of course there was an option to hire an engineer to transmit development to him, but such project needs a great team with great experience. So we decided to cooperate with a company who are professionals in their field.

Six months seems like a short time to build such a complicated product from scratch. What sets you apart from other teams that have tried and failed?

We understand that there may be some delays, but if all goes according to our plan, then it’s real. We have plans to show working (not final) prototype till the end of the campaign.

Are refunds available to all backers that have concerns about the viability of the project?

Of course, we have already written several times to Indiegogo Support to request refunds to people who ask for it. But the problem is that they say that we can make refunds only after the end of campaign to each contributor individually. Therefore we have a refund list that in which we record every person who have asked for refund. It will be really great if suddenly something will change and Indiegogo will find a way to make refunds right now.

Here is an answer from Indiegogo with confirmation of this information.

Why did you go for Flexible Funding if it would have potentially left you short of cash? Could you have completed the project with just a portion of the goal?

If we had raised $2000-3000 or another small amount, we would have to cancel the project and return the money to people. But if we have collected $35000-40000, it would allow us to develop our watches and prepare them for production. After that we would have to look for an investor, but we could show to him a fully developed watch and that people is interested in Ritot even on crowdfunding stage. It would increase the development and manufacturing time, but it would given us the opportunity to give life to our project.

You removed some information from your campaign page, including a claim that you had shared your passports with Indiegogo – was this true? If so, why did you delete it?

We decided that those who had questions about this information already received an answer, and we have removed it. Moreover this information is repeated in our comments when we receive question about it. Yes, we did send the information about us and copies of our passports to Indiegogo for identity confirmation.

What is your team’s background? Why can we not find anything about you online?

As we have already written, we have hidden all information about us and took aliases. We will bring our social account back to life soon. Just want to remind you that all our passports were sent to Indiegogo.

So there you have it. Since Indiegogo has seen their passports, we’re willing to chalk up Medvid and team’s fake identities as a well-intentioned mistake, but we don’t share his optimism about the project. We’ve seen plenty of other crowdfunding hardware efforts who were farther along in the process fall apart while trying to solve easier technical challenges. Of course, we’d love for Ritot to prove us wrong, but for now, you’re better off exercising extreme caution.

Read next: The trouble with crowdfunding: When an interesting product blinds you to red flags