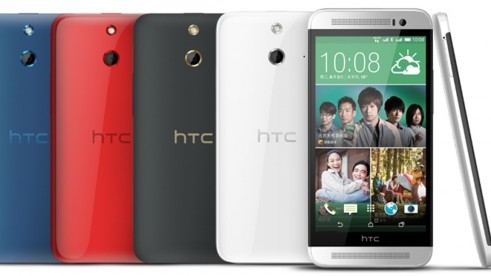 HTC has announced a new variant of the HTC One M8: the plastic-clad HTC One E8. The device recalls its big brother but is manufactured with a polycarbonate unibody frame, rather than the metal shell of the M8.

The E8 comes with many features of the M8, including a five-inch display and 13-megapixel camera, as well as Motion Launch shortcuts and BoomSound audio. Available in four colors — Polar White, Electric Crimson, Maldives Blue, and Misty Gray — it also includes dual-SIM support, a “Selfie Perfection” countdown timer for the front-facing camera and a more curved design.

HTC says the device will be available in selected markets from “early June,” but there’s no word on how much it will cost. The One M8 comes in at $649 unlocked in the US, we’d expect the E8 to target more price-sensitive markets.

The One E8 is the third device in the 2014 One series — it follows the HTC One Mini 2, which is essentially a stripped-down version of the M8.

Related: HTC admits it needs better marketing, says bloggers will be a big part of the puzzle in Asia