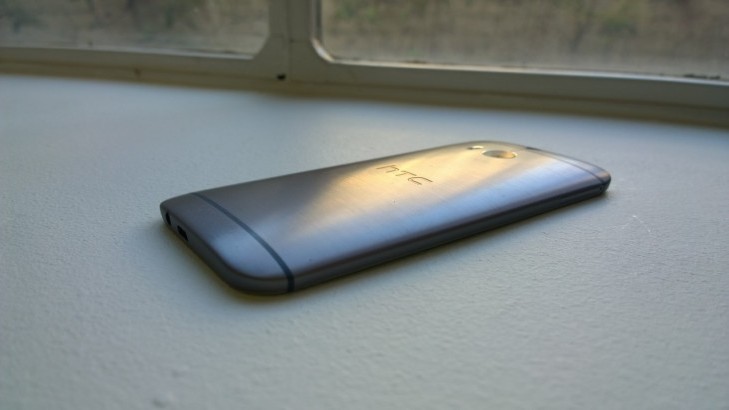 HTC has confirmed one of the most leaked handsets in recent memory, its new flagship HTC One (M8).

The device, as its name suggests, is a successor to the original HTC One and keeps many of the same design traits, like a smooth, single piece metal shell.

Core specs include a full HD (1920 x 1080 pixels) 5-inch IPS display, a quad-core 2.3GHz Snapdragon 801 Qualcomm processor and 2GB RAM to keep it ticking over. Unlike the first generation One, the new device comes with microSD support for cards up to 128GB, in addition to its 16GB or 32GB of onboard storage. There’s also 50GB of free Google Drive storage included with each handset, and it’s made the jump to using a nano-SIM too.

There are a couple of variations to this though. In Europe, the 16GB model will be offered, but the 32GB variant will only be available in Asia and the US, according to a spokesman. Additionally, the version on sale in China will feature a 2.5GHz processor, rather than a 2.3GHz affair.

Some old, some new

Some of the biggest differences between the generations are reflected in the camera capabilities, by both hardware and software. Although the camera is the same 4-megapixel ‘UltraPixel’ setup, it’s now called a Duo Camera as there’s another camera-like device above it.

Camera-like is the key here. Despite having camera in its name, the second actually acts as a sensor to capture spatial information and allow certain tweaks to be applied to an image.

Among the list of effects that you can apply is faux-3D mode (that uses spatial information captured by that extra sensor) called Dimension Plus and others like Foregrounder and Zoom Blur which allow you to easily add bokeh blur to your shots or selectively focus on a certain element in the picture. You can also add a number of effects to your images, like snow or leaves, similarly to Google’s Auto Awesome.

Graham Wheeler, Director of Commercialisation Product Management at HTC, said the company had “re-tuned the Ultrapixel” camera to work in combination with the Image Signal Processor (ISP) in the Qualcomm chip. The end result, in theory, is better quality, less washed out looking pictures in bright conditions.

“It allows you to get sharper shots in any light… One of the criticisms that came up [with the original] was washed out pictures in bright light – great in low-light, but maybe a bit washed out [in bright light]. That re-tuning gives us great definition and detail in any light,” Wheeler said.

There’s also still the Zoe mode for taking short clips, although this can’t be combined with the new effects.

Battery-wise, there’s now a 2600mAh battery (up from 2,300mAh) and a quick charge feature that will recharge 80 percent of the battery within the first hour of charging, with the remaining 20 percent taking a little longer. Despite being a little larger than the previous generation battery, it’s still a little smaller than those found on the Samsung Galaxy S5 (s,800mAh) or Sony Xperia Z2 (3,200mAh).

HTC has also included some gesture controls that don’t require waking the handset, a bit like the Moto X. For example, double-tapping the screen will show the time, swiping from left-to-right will launch BlinkFeed, right-swiping will open widgets and swiping up from the bottom will take you to your last action.

The camera can also be quick launched using the volume keys – and is the only function that will actually launch if there’s a lock screen password or other code in place.

The company said it had also worked to improve the sound quality from the dual BoomSound speakers too. The end result, according to HTC, is a 25 percent louder output, but it also an altogether rounder sound now too. The handset has dropped the Beats branding and tweaks this time around though.

The HTC One (M8) runs Android KitKat (4.4) out of the box, and comes with a new version of HTC’s Sense (6.0), with most of the updates focused on the BlinkFeed UI and personalization tweaks.

Most notably, the feed itself doesn’t scroll in a paginated way – it’s now a free flowing list. Wheeler also said that the team had been hard at work resizing certain elements within the feed to make sure it “looks really cool and crisp”. There are new content providers and easier ways of adding content too.

There are also ‘bundles’ of content suggestions – so, when you click them you get multiple articles on a topic, rather than a single one. To get new users up and running with BlinkFeed, it can be connected to Google+ and Facebook for quick personalized content suggestions.

And as before, if you don’t like it, you can remove BlinkFeed entirely.

One of the other changes is the move to on-screen floating buttons, rather than sitting them either side of the logo as was previously the case. Wheeler said this was to allow for standardization of apps across all devices.

HTC is also making the Zoe camera mode a standalone download from the Android app store, so that other (“selected”) devices can use it too – although not until later in 2014. Similarly, ‘Video Highlights’ can now be collaboratively sewn together to create longer clips from a night out from a group of friends using the new Zoe app.

Thanks to an array of sensors, the device can also track step counts using the pre-installed Fitbit app without the need for a band. It’s less accurate than using the dedicated Fitbit band, as it’ll only track everywhere you take your phone, but it’s a start.

The ‘all new HTC One (M8)’ brings with it an all new case. It’s actually a bit different to what we normally see and uses a special dot matrix mode on the display to allow you to see the time, weather and other updates through the case.

The cases will be available in a range of colors, but there’s no indication of pricing just yet.

You can still use the tap-to-wake features here too, so there’s no need to open the case even to look at the time, for example.

Ahead of the launch, UK retailer Carphone Warehouse said the device would be available immediately following the launch, although pricing wasn’t revealed.

The HTC One (M8), as the company’s new flagship will have to take on the Galaxy S5, iPhone 5s successor, Sony Xperia Z2 and every other device maker’s best efforts. As an essentially incremental upgrade that focuses on improving core abilities (like the camera and sound) of the original, rather than implementing all manner of biometric sensors or waterproofing like some of its competitors, it’ll need to perform absolutely flawlessly to be a success. Watch out for our full review in the near future, and check out our first thoughts from our hands-on while you’re waiting.