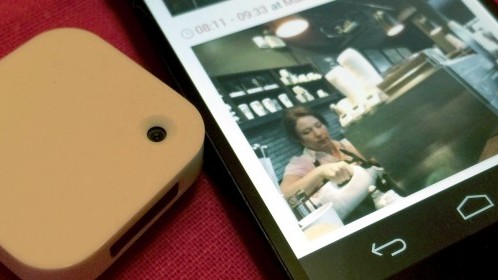 I have a memory that when I was eight years old, my dad collected me from school one day with a new exercise bike slung over his shoulder. Now I think about it, that seems unlikely – our exercise bike was pretty unwieldy, and my dad can’t remember bringing it to the school gates – but in my brain its a crystal-clear image.

If only I had a camera with me at all times, automatically logging the seemingly mundane moments that I may want to revisit in the future. That’s part of the appeal of the Narrative Clip, a ‘lifelogging camera’ that has finally launched after almost 18 months of hype and postponed release dates. I’ve been anxiously awaiting its arrival for most of this time, and just over a week ago it finally arrived.

The Clip is a tiny 1.42″ x 1.42″ x 0.35″ camera available for $279 in white, grey or orange, that attaches to your coat, shirt, bag strap or wherever is convenient. It takes one photograph every 30 seconds of whatever’s in front of it, with the aim of creating visual diary of your life.

Hardcore lifeloggers can wear it all day, grabbing photos of their entire waking lives, while those more interested in capturing a fun event could just wear it to conferences, sporting events, concerts or the like. There are even potential journalistic uses – I’m thinking of wearing a Clip to SXSW this year to see if it captures anything worth using. To make sure it’s taking a photo at just the right moment, a double-tap of the Clip’s front panel makes it take a photo right away in addition to its automatic snaps.

A full battery should last for around 30 hours, and my unit charged from empty in under two hours.

One you’ve finished taking photos, you connect the Clip’s Micro-USB port to your Windows or OS X computer and all your photos are removed from the device and uploaded to Narrative’s cloud service. You do have the option to keep a copy of all the images you’ve taken locally, too, although at a rate of 120 5-megapixel images per hour, they can quickly make a serious dent in your local storage capacity. Still, it’s probably a good idea to keep copies if you can.

Once your photos are uploaded, Narrative processes them and automatically picks the most ‘interesting’ images based on software algorithms. Photos you took manually are automatically flagged as favorites, too. Your photos are assembled into ‘moments’ that you can then view via the accompanying iOS and Android apps. By default, you’ll get a slideshow of your best images, although a quick tap of a toggle switch reveals every single image you captured, navigable with a swipe of your finger.

If there are any images you want to share with the rest of the world, you can share them from the app via Facebook, Twitter, email or Instagram. There’s also a download button, presumably to save an image to your mobile device, but it didn’t seem to work no matter how many times I tapped it in the iOS version. Presumably, this will change with an update to the app, and I had no such problems with the Android version, which allows you to move photos to almost any app you like thanks to the way sharing works in Google’s OS.

The Android version suffers a bug that makes sharing multiple photos from the same ‘moment’ impossible without restarting the app between each one – they’re all given the same file name and Android thinks they’re the same image. A bug on both iOS and Android means that occasionally timestamps on ‘moments’ are several hours off, but this seems to resolve itself after a while. However, these are bugs that should be easily resolved in the future, via app updates.

So how good are the pictures? That obviously depends on how visually interesting your surroundings and activities are, but it also depends on the positioning of the camera. For example, I was looking forward to a neat stop-motion summary of a haircut I had last weekend (Tim Bradshaw at the FT recently did the same thing with positive results) but the camera was pointing a little further upwards than I thought it was and the results weren’t very well-framed.

Later, I met someone for a coffee but despite me thinking my camera was facing forwards toward the person I was meeting, my coat had ruffled up slightly and pointed the camera out of the window instead.

I quickly learned that positioning the Clip is everything when it comes to getting shots you’ll want to keep. Unfortunately, it’s a matter of slow trial and error, as you only see the results of your experiments after you’ve uploaded them to Narrative’s cloud. I found that wearing the Clip a little lower down my coat than I initially expected compensated for its tendency to point slightly upwards. This resulted in more photos featuring people’s faces and other things around eye level. 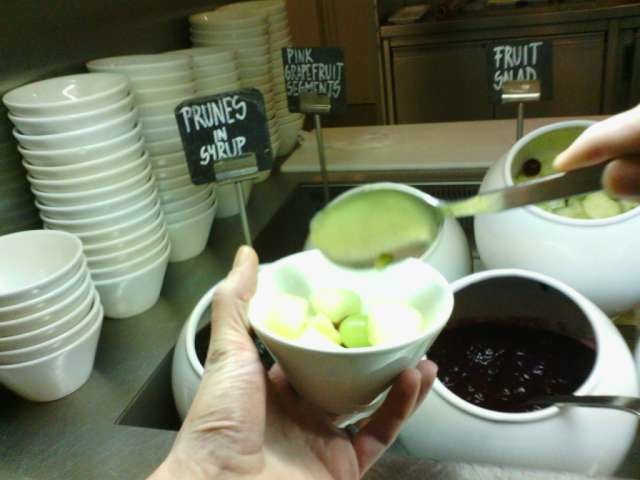 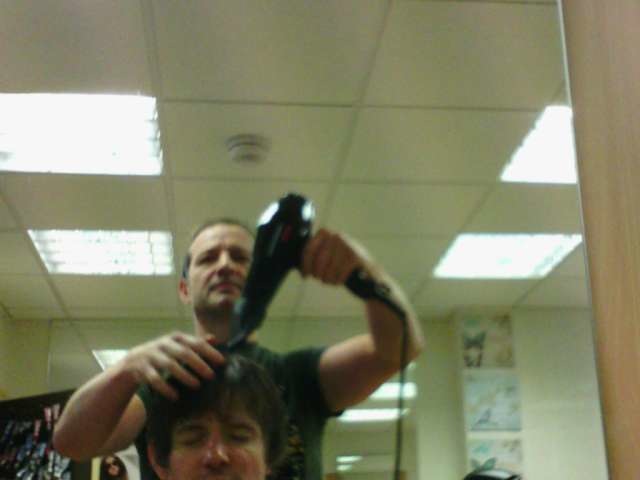 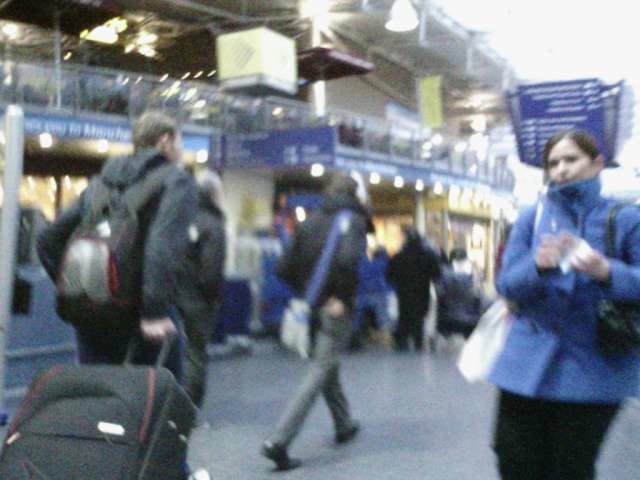 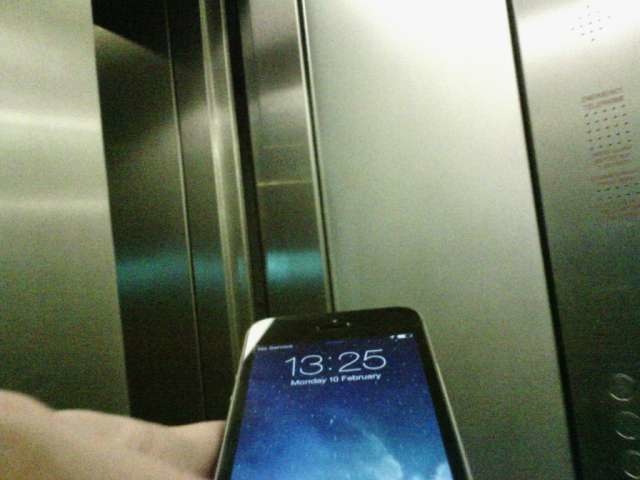 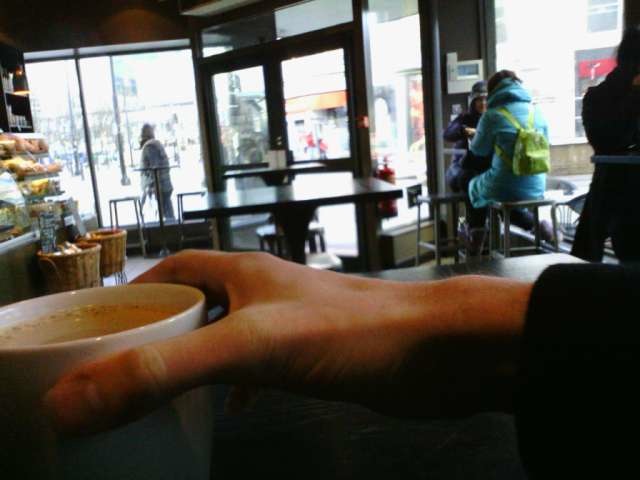 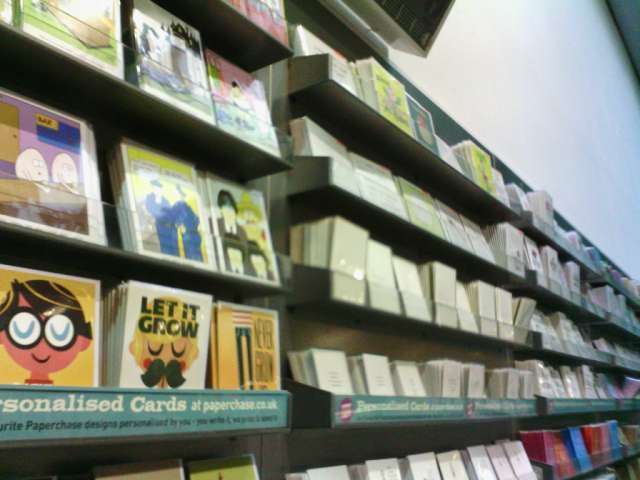 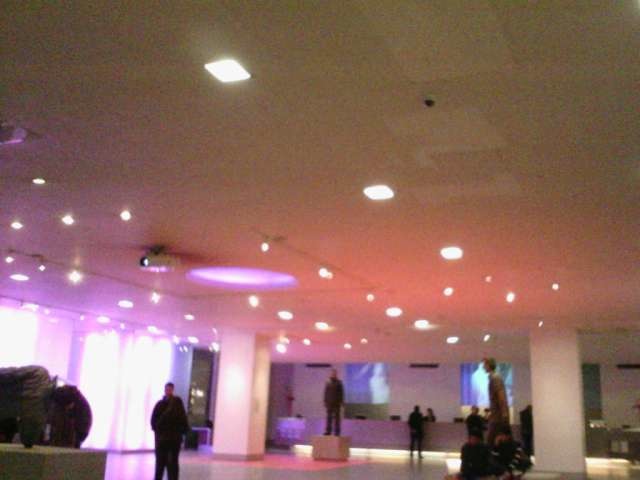 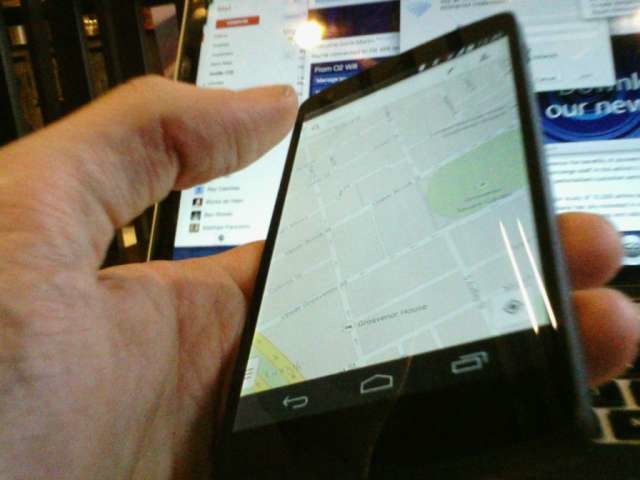 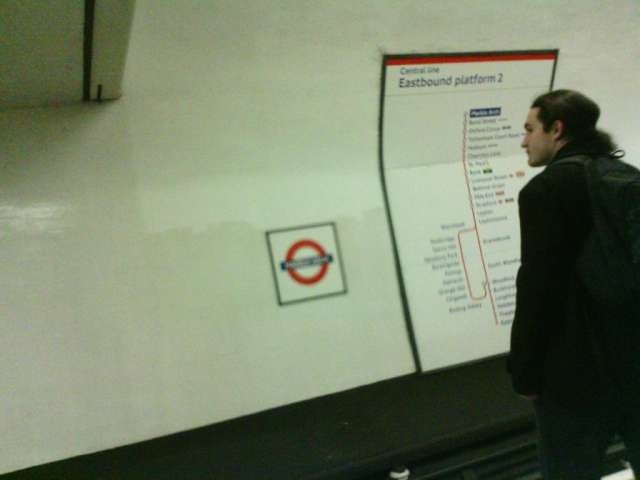 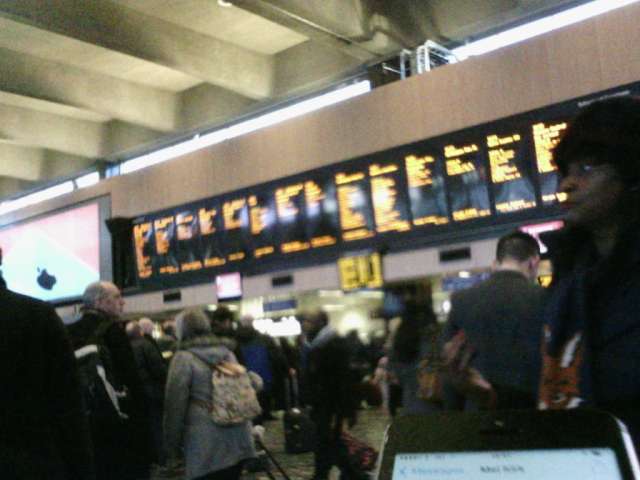 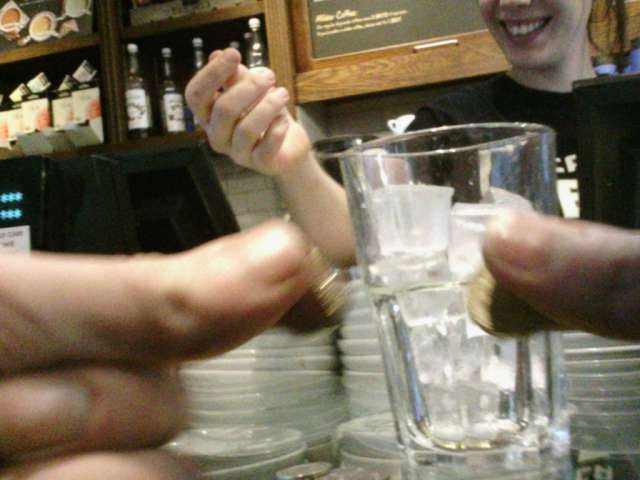 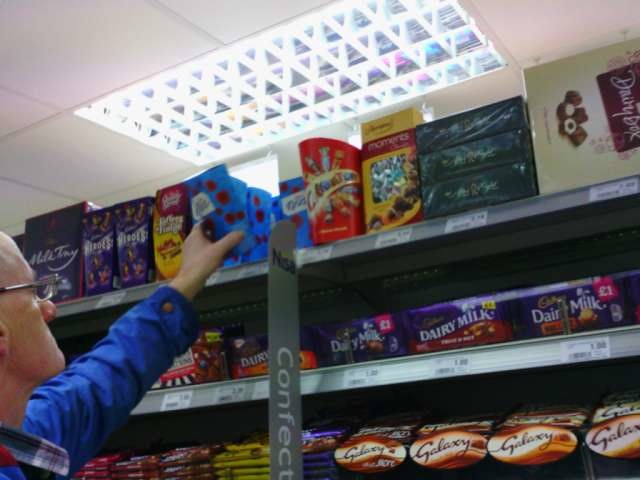 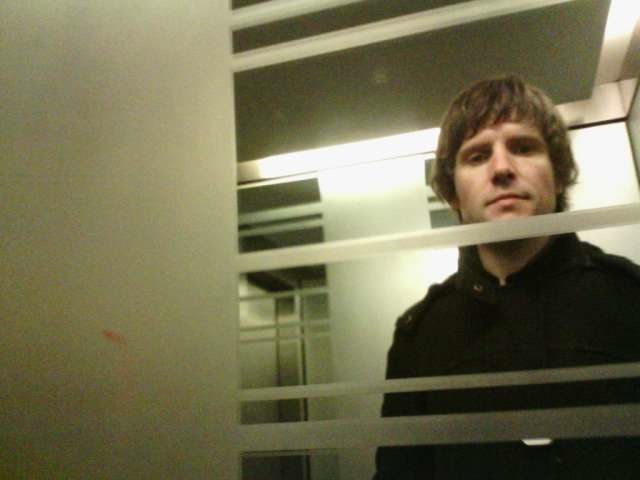 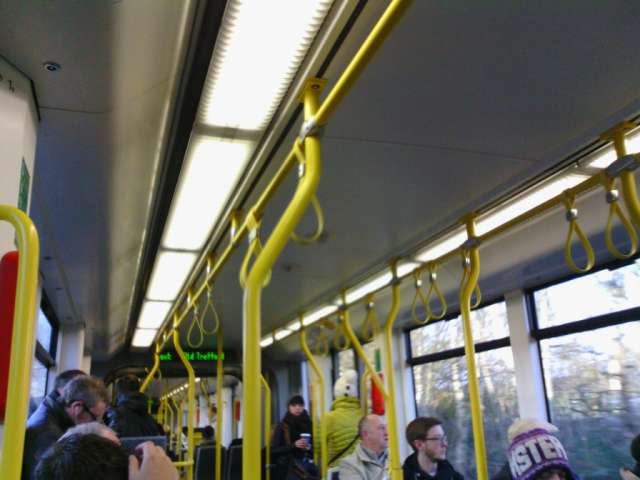 From a quality level, the images are sometimes blurred and often poorly framed but this isn’t about high-level photography. The Narrative Clip is all about capturing a flavor of your day in a raw way that deliberately-taken photos simply can’t match.

The etiquette of wearable cameras

Much has been made of the etiquette issues around wearing Google Glass in public, and the Narrative Clip is a good dry run for this, before Glass units start being sold to the general public.

I expected to get worried looks from passers-by when they noticed my camera, but nobody seemed to act differently around me, and very few even seemed to notice I was wearing an odd little white box with a tiny lens in its front face. Once someone knew it was a camera though, a funny thing happened – their behavior changed ever so slightly.

I told my hairdresser about the camera before he started cutting my hair and he was happy with me to wearing it (especially when he found out it was taking photos, not shooting video or recording audio) but he dropped a hairdryer on my head at one point, an accident he blamed on become distracted by the camera and wanting to make sure he looked okay if it was taking a photo at that point.

A few days later, I gave a talk about new technology to a group of librarians while wearing the Clip. During the talk, I explained what the Clip was and they all seemed okay with it. It was only in the pub afterwards, when they realised I was still wearing it, that their body language betrayed discomfort with a camera taking photos of them without them knowing exactly when. I quickly removed the camera and everyone relaxed.

These people were happier with the idea of public authorities photographing them via the security cameras that monitor UK cities than they were with a private individual photographing them for reasons of which they can’t be sure.

There are bound to be some socially uncomfortable moments if you wear a Narrative Clip and another wearable camera regularly enough. Narrative has thought about this problem and stopping the Clip from capturing images is a simple case of removing it and placing it face-down. Considerate use is recommended.

Aside from the pricey Google Glass, which can be thought of as the Rolls Royce of wearable cameras (and does so much more), there are others out there closer to the Clip’s price point, such as the Autographer (read our review) and the forthcoming video-focused HD MeCam and Parashoot. Assuming that people actually want to wear such devices on a regular basis, we’re going to have to work out what the acceptable behavior is for them.

So, should you buy one?

There are some people who are going to rush out and order a Narrative Clip immediately and use it as much as they possibly can. Casual users will also find benefit from recording sporting endeavours, family days out and the like in a fresh new way.

If you can’t see the appeal, it probably isn’t for you yet, although if this form of recording our memorable – and not so memorable – moments becomes more popular, maybe it will ‘click’ with you in time. The image quality will no doubt improve in future generations of wearable cameras, so if that’s your primary concern, it might be better to wait.

Given that you’re entrusting Narrative’s servers with timestamped, geotagged photos of your life in minute detail, you have to trust that the Swedish startup will look after them. This is an issue I brought up with CEO Martin Källström in an interview last summer, and more recently he was the only founder willing to speak to me on the record about the importance of data security when it comes to early-stage startups.

Narrative certainly takes this issue seriously (and explains more to the FT here), but it’s something you need to bear in mind, and keeping local backups of all your photos is definitely a recommended move if you can.

In addition to the upfront price, it’s worth considering that after your first (free) year, you’ll have to pay $9 per month for use of the cloud service. Seeing as the Clip doesn’t really work without it, this is definitely a point to bear in mind.

The Narrative Clip is the most polished of the wearable lifelogging cameras we’ve looked at to date. Aside from the couple of minor quibbles with the app mentioned above, and the fact that the device’s tiny size makes me worry that I’ll lose it, the Clip is just as good as I hoped it would be.