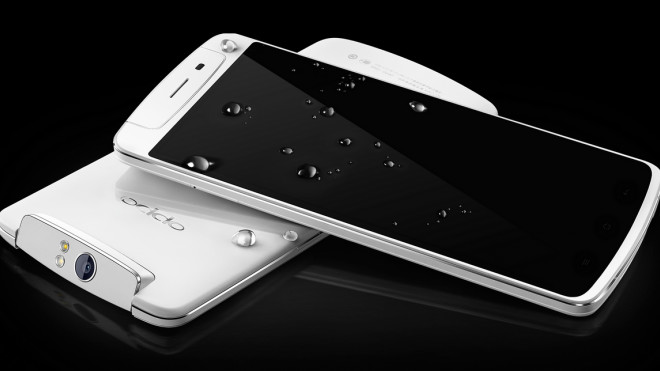 Many of the big handset makers are trying to establish and differentiate their latest flagship smartphones with vastly improved cameras. Oppo is no exception, after it unveiled the N1 today with a 13-megapixel snapper fitted to an adjustable hinge.

The handset has a 5.9-inch, full HD display (373 pixels per inch) and is the first to run Oppo’s new Color OS operating system, based on Android 4.2. The N1 also offers a 12cm squared rear touch panel that lets you scroll, tap and capture photos – maybe we’ll see some PlayStation Vita-style mobile games taking advantage of it too?

Oppo claims that its new camera, constructed from 67 different components, is the first to feature a six-piece lens design in an Android smartphone. With an f/2.0 wide aperture and the company’s own Owl imaging processor, it has a lot to prove against photography heavyweights such as the iPhone 5s, Lumia 1020 and Xperia Z1.

The hinge is certainly novel, if a little unsightly. Front-facing cameras have typically been abysmal on high-end smartphones, so here’s hoping this contraption, rotatable over 206 degrees, makes crisp, high-resolution selfies and video calls a reality.

The N1 will be available for 3,498 CNY, or roughly $570 USD. Pre-orders will go live on Oppo’s website later today, with a full release expected in early December.