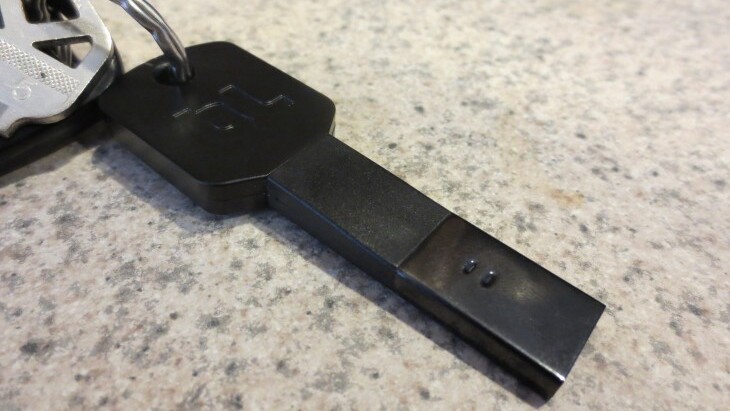 A few months ago, when we were at CES in Las Vegas, we got a peek at some new products from one of our favorite manufacturers, Bluelounge. Today, the company has released updated, Lightning-equipped versions of these designs, bringing them to the masses.

The first is a simple yet amazing product, called the Kii. It looks like…well…a key. But it holds a secret. Sliding the device into its two parts reveals a USB-to-Lightning adapter, making sure that you can charge your devices on the go. I’ve been carrying a 30-pin version of the Kii since CES, and it’s been positively invaluable. But the updated design not only makes it sleeker, it also gives a dramatically more secure fit of the adapter into its host.

The Kii’s adapter is understandably short, when compared to a full Lightning cable. It is, after all, meant to emulate a key on your key ring. But you obviously are going for convenience and it’s a heck of a lot easier to carry a Kii than a cable.

The Kii is available now for $39 in black or silver with a Lightning connector. If you’re still using a 30-pin, you can get it in black for $19.

Next up is one of my favorite Bluelounge products ever. It’s called the Saidokā. It’s a charging cradle for your iPhone that sits perfectly aligned with your Apple keyboard, leaving your phone at the exact angle that you need to simply look down, use it and then go about your work.

I’ve been using the 30-pin version of the Saidokā since January as well, and I can tell you that it’s undoubtedly the best iPhone charger on the market, at least in my opinion. While I’m a fan of stand chargers that keep your phone more upright, the Saidokā’s approach just seems to work better for me.

Bluelounge has gone back to its “micro-suction” formula to keep the Saidokā in place on your desk, and it works beautifully. Even after moving mine numerous times, all it takes is a wipe-down with a damp cloth to bring the adhesion back to the base. An included insert keeps your naked iPhone secure, but removing the insert allows the charger to work with most thinner cases.

All said, these are great updates to already-stellar products from one of the companies that I’ve come to admire most in accessories for your office. Bluelounge still makes the best desk I’ve ever seen, and there are some other incredible products coming in the near future. We’ll be reviewing them as soon as they come out, so make sure to keep an eye on TNW Gadgets.