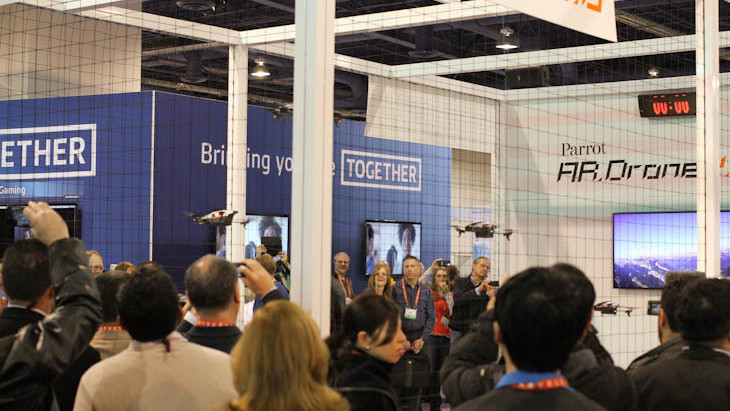 When Parrot added an HD camera to its already very popular quadrotor AR Drone, it birthed a whole new segment of customers for the remote flier.

Because the quality from the camera is actually pretty solid, and the AR Drone could go places that it would be much harder for a human to reach, it became a valid choice for documentary and news videographers. By combining the AR Drone’s footage with shots from standard cameras, a unique perspective could be added.

Unfortunately, there were some technical limitations and issues that came along with using the Drone as a camera. First, there’s the issue of the video stream being compromised in areas of poor WiFi signal. When the link between a controlling device and the AR Drone is weakened, the integrity of the control link takes precedence over the video link. This means that recording apps that captured video over the link often got compressed or poor results, much worse than what the camera was capable of delivering.

That’s where the new Flight Recorder accessory comes in. It’s a small orange unit that takes on the tasks normally assigned to an aircraft’s ‘black box’.


It’s got 4 gigabytes of built-in memory and a GPS unit tucked away inside, which allow for some clever twists on the AR Drone’s capabilities. Video can now be captured directly to the Flight Recorder, for instance. This removes the downlink from the equation, delivering top notch video directly from the camera. You can then download the video later, not worrying about a poor connection causing image degradation.

Second, you can now map the entire flight path of the Drone using the Flight Recorder’s GPS and the altimeter already built into the unit. This means that you can now view the entire flight in 3D, seeing exactly how the Drone flew through the air. Viewing a path in the software, twisting and tilting it, really gives you a solid idea of spatial relationships. It’s very cool and should be a welcome addition to the Drone community.

Julien Gailou, project manager of the AR Drone 2.0, told me that the uses for the flight paths are numerous. Creating games of ‘follow the leader’ for instance, where one user attempts to duplicate another’s flight path.

To go along with the new recorder, the Drone will also be getting a firmware update that adds more predictive stabilization and smoother positioning, making it a more stable camera platform. This ties into a new software feature for the app called Director Mode.

Director Mode lets you set a direction and a rate and execute that, allowing the Drone to take over and autonomously track along that path. This allows for panning, rising or falling shots that are done as smoothly as possible, with the newly revamped firmware (applied from inside the app) to read micro-gusts of air and other interruptions and correct for them so your video isn’t jerky.

In addition, the Director Mode allows you to set exposure, white balance, saturation and more to match your footage to the other stuff you’re shooting. This is far more control than was ever allowed over the AR Drone 2.0’s camera.

There’s even a built-in tool that analyzes the video and telemetry for ‘jerky’ sections and allows you to clip those out of your footage.

To go along with the new features is an extended 1500 MAh battery which will service up to 18 minutes of flight time. There are also two new games including Air Race 2, which no longer requires Parrot’s marker accessories. No pricing or availability has been announced for either the Flight Recorder or new battery.

I asked Gailou about whether the success and continued enthusiasm for the AR Drone took Parrot by surprise. “Absolutely,” he said, “it was like dipping your finger in to test the temperature of the water, and it’s boiling hot.”

In addition to the enthusiastic hobbyist userbase, there is a vibrant hacking community that continually stretches the capabilities of the AR Drone. Drone Games in San Francisco hosts hackathons that result in some pretty incredible stuff. The winner of the last competition was able to use a Drone to hack into other Drones, infecting them with sets of random flying commands.

There’s something about these quadrotor flyers that remains captivating. Parrot had a huge crowd watching a set of its drones perform acrobatics to music and it didn’t go away all day. And if it can continue to add new features and fulfill user-discovered needs like better ways to use it as a mobile camera, it doesn’t look like the AR Drone will either.