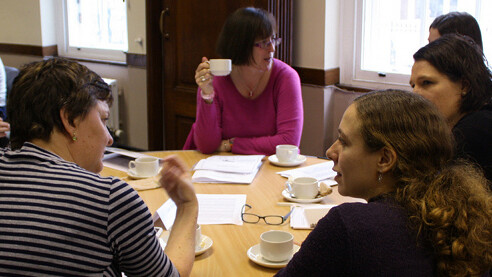 Carrying water just got a whole lot easier. French designers Mathieu Lehanneur and Julien Benayoun teamed up with Harvard professor David Edwards to create the “Pumpkin,” a unique water carrying device that can be used both domestically for sport and in international aid situations.

The Pumpkin is carried like a shoulder bag and is modeled after a biological cell. When used in leisure, it will hold 1.5 liters of water while transporting personal items in a detachable bag. For use in sport, like hiking, the Pumpkin can also detach from the bag and connect to tubes to hold 4-8 liters of water that can be slung across the back or encircle the user’s head. For relief situations, the container can hold up to 15 liters of water around the shoulders, neck or torso. The tubes also act as a filter.


Work on Pumpkin began in the Harvard Lab in 2008 and has since involved several international teams including Le Laboratoire, Labogroup, and Artscience Prize. While Lehanneur led Pumpkin’s design, Edwards was integral in the technical aspects of the water vessel. With South Africa in mind, Pumpkin was created to help local inhabitants imagine new ways of transporting water. The container was produced for commercial sale in locations throughout the developed world in 2010.