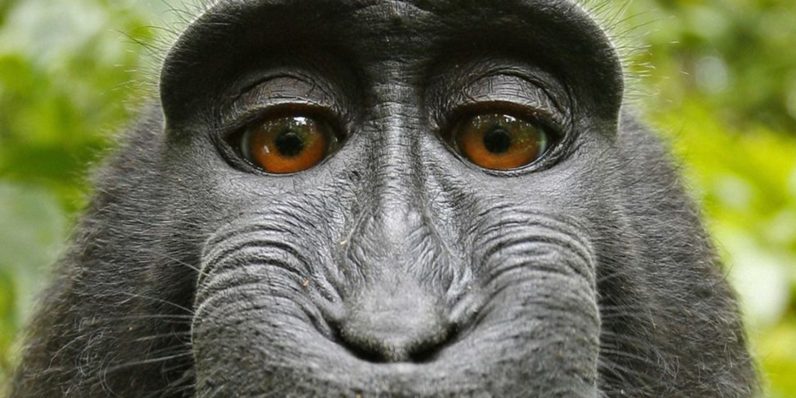 A photograph taken by a monkey in Indonesia is at the center of a copyright case that could spell the future for works created by non-human authors.

People for the Ethical Treatment of Animals (PETA) filed a lawsuit on behalf of the monkey in question, Naruto, who took a selfie with photographer David Slater’s camera. PETA claimed that, as the creator of the work, Naruto owned the image, and any profits from it should go towards preserving his species. Oral arguments at the Federal Court of Appeals began today.

One of the points brought up by PETA’s lawyers is any law passed (or not) in Naruto’s favor could reflect the rights of other non-human entities — such as robots or computers powered by artificial intelligence.

Following the original trial in 2014, the US Copyright Office’s compendium was updated, and Chapter 300, “What Can Be Registered,” lists all the things which are not eligible, and underneath, “A photograph taken by a monkey,” it says:

Similarly, the Office will not register works produced by a machine or mere mechanical process that operates randomly or automatically without any creative input or intervention from a human author.

Still, the USCO notes in the compendium: “The policies and practices set forth in the Compendium do not in themselves have the force and effect of law.” So the actual legal rulings still matter.

The appeals court ruled that Naruto can’t be the owner of the selfie because he and his heirs cannot profit from it. Instead, works such as his selfie would either go to the human most closely associated with the creator, or go into the public domain, as Wikimedia classified the monkey selfie.

It’s been a messy case, to say the least: the naturalist who was acting on Naruto’s behalf — the court requires a friend to act as the absent party’s representative — eventually backed out. A member of PETA had her arrested when she tried to visit him, allegedly to discuss the case. The legal arguments made before the courts somehow drifted into a tangent on same-sex marriage (it doesn’t make much sense in context, either).

Regardless, this could mean that, in the future, artificial beings that create would not be able to claim authorship of their own work — instead, it would go to the humans who gave them the tools to create it or to no one at all.

The Latest: Attorney: Monkey cannot get money from copyright on Washington Post

Read next: Apple's giving away free Beats headphones on Mac or iPad purchases (and not just for students)