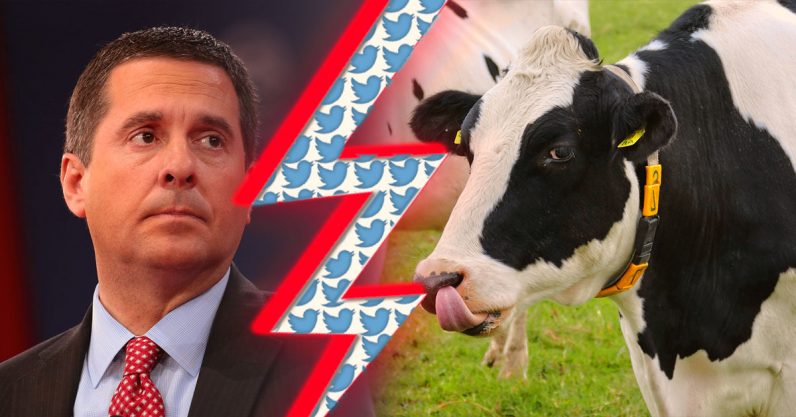 US Rep. Devin Nunes can’t seem to catch a break. First, despite his memo blaming Obama and the FBI for all the evils in the world, his fellow former members of the Trump transition team keep getting indicted for being bad at crime. And now he can’t figure out which one of his cows is helping his mom make fun of him on Twitter.

Nunes, the Salacious B. Crumb to Donald Trump’s Jabba the Hutt, filed a lawsuit against two parody accounts on Twitter earlier this year. According to a report from The Fresno Bee, Nunes argues that “activists conspired to damage his reputation in 2018, both to harm his chances at re-election and to obstruct his ability to lead the House Intelligence Committee.”

The activists he’s referring to:

The lawsuits are ridiculous. This country was literally founded by people who wrote a Declaration of Independence criticizing their king. Shame on you for trying to limit Americans’ rights. There’s a lot of us and we aren’t backing down. Ever. It’s on. 🐮 https://t.co/owZSDOl0er https://t.co/RwT6YlbOQw

That’s right, Nunes is seeking $250 million in damages in a Virginia court because some person(s) made parody accounts pretending to be one of his cows (he’s supposedly a farmer) and his mother. By the by, as is evident by his position as ranking member of the House Intelligence Committee, he was reelected anyway. In essence he’s suing two trolls for hurting his feelings and making him look bad.

Gosh dangit mom! You’re embarrassing me in front of the constituents online! I’m going to my room!

The judge overseeing Nunes’ lawsuit, Judge John Marshall, requested Twitter reveal the names of the individual(s) responsible for the parody accounts @devincow and @mom_nunes, but the company wasn’t keen on the idea of disclosing its users private information unless compelled to do so by an actual law.

TNW reached out to Twitter and a spokesperson told us:

Defending and respecting the user’s voice is one of our core values at Twitter. This value is a two-part commitment to freedom of expression and privacy.

Devin Nunes’ $250 million dollar lawsuit is not only a frivolous waste of taxpayer’s money and the court‘s time, it’s also stupid. You can bet your bottom dollar that his idiotic lawsuit is directly responsible for these parody accounts becoming household names for politicos – the cow one has 618K followers as of the time of this writing.

At the end of the day it’s a travesty that a politician sworn to serve the people sees insults against his character as a means to obtain a $250 million payout. This is, after all, someone whose political legacy will be defined by his complete and utter (udder?) allegiance to Donald Trump, a man who’s made his entire political career about attacking people on Twitter. Here’s a graphic from The Washington Post showing an analysis of 1,693 Trump insults on Twitter:

I know it’s early, but I’m going to call it: Nunes suing a fictional cow and a parody of his own mother is the stupidest lawsuit of the year. Thankfully Twitter got its response right.