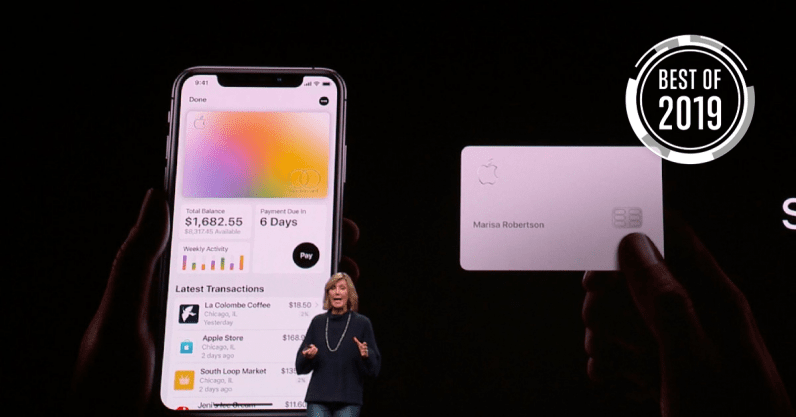 I’ve long espoused the belief that the entire tech press corps deserves to be quarantined on an isolated island in the South Pacific, where they don’t have phones or the internet. No exceptions. It’s a bit extreme, but it’d spare the rest of humanity our collective incredulous, fawning fuckwittery when it comes to crap tech brands.

Not sure what I mean? Just look at the reaction to the new Apple credit card, which has been hailed as “disruptive” and a “game changer,” even though it’s just a normal credit card attached to a fancy app.

The most embarrassing specimen of this shameless sycophancy comes from, surprisingly, legendary (and otherwise sensible) tech reporter Kara Swisher. In a recent New York Times op-ed, she effortlessly segued from talking about the mass shootings in Ohio and Texas into a discussion of why the Apple Card is a “glimmer of hope.”

The thing is, when you strip away the hype and the glitzy technological bundling, the Apple Card is just another credit card. And, as a recent report in CNBC shows, it’s being offered to subprime customers at eye-watering interest rates.

One new Apple Card customer, Ed Oswald, said his FICO score is about 620. The Reading, Pennsylvania-based copywriter said he had been using a subprime card from Merrick Bank.

“I was absolutely shocked I got it,” Oswald said. “I have a lot of collections from two or three years ago when I was in a really rough spot. When I heard it was with Goldman Sachs, I figured they were going for the high-income set.”

Oswald said Goldman is giving him a relatively modest credit limit of $750. He said his interest rate on the Apple Card, at 23.99%, is “a lot lower” than his other cards.

As a Brit, I’m used to the tech world elevating abusive fintech brands, regardless of the harm they inflict on ordinary people. The best example of this was Wonga, a payday lender that offered short-term loans with an APR of 5,853 percent.

If Wonga offered its loans from the dimly-lit parking lot of a pub, it’d be in jail for illegal lending. But it used a website with a few imaginative UI quirks, so it won awards. When The Telegraph launched its inaugural tech startup competition, the Startup 100 Awards, it won the top prize – although this was quietly vetoed and given to Spotify, largely due to Wonga’s abysmal reputation.

Wonga also won glistening awards from The Sunday Times, as well as left-leaning newspaper The Guardian, which is a bit strange given it was famously critical of the lender’s business model.

We all know what happened next. Wonga was forced to repay almost 40,000 customers over charges it mis-sold loans. The company then went into administration, and now it exists in a zombie state, waiting for someone to finally pull the plug.

Here’s the thing: there’s nothing inherently innovative or clever about helping people get into debt. But there are a lot of companies who are helping people better manage their money that don’t nearly receive the same level of coverage or applause.

So, fuck it. Let’s talk about them.

Regular readers will know I’m a huge fan of of Monzo. This “neobank,” which is planning a US expansion, focuses heavily on helping people better manage their money by showing their outgoings and providing immediate access to their financial activity.

Another innovative product is Emma, which offers an overview of a person’s financial life, including their credit cards and bank accounts. Users can track their spending, automatically cancel subscriptions they no longer use, and create budgets.

Freetrade is another good example. It allows people to invest in the stock market without paying the usual brokerage and management fees. It’s a great way for ordinary people to grow their savings during a time when many bank accounts offer negligible rates of interest.

There are so many good fintech products out there. Let’s pay attention to the ones that are helping people, not hurting them.

In the meantime, I’ll be packing my bags. Pitcairn Island, here I come!