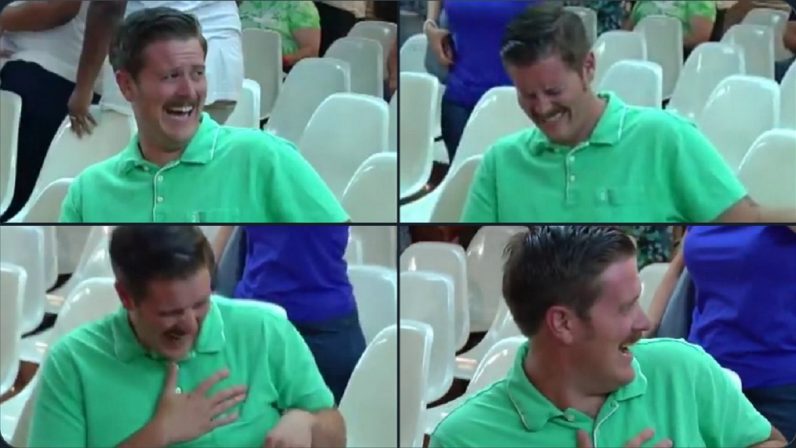 Social media discourse is generally unhinged. But for those who follow US politics, simply opening the Twitter or Facebook app is like jumping into a swirling vortex of rage and blame. It’s as though we’ve forgotten how to communicate with one another as mature, professional adults. Thankfully, #GreenShirtGuy came along to show us the proper way to deal with political absurdity.

Scene inside a Tucson City Council Meeting. Officials voted to put a "Sanctuary City" measure on the November ballot pic.twitter.com/mEh4PNj0Wo

Green Shirt Guy, whose real name is Alex Kack, is a comedian and activist who attended a Tucson, Arizona city council meeting on Tuesday. There he encountered a pair of anti-immigrant Conservatives protesting the city’s plans to vote on a sanctuary city initiative. When the duo began shouting and waving signs at the end of the meeting, Kack reacted in the most human way possible: he laughed his ass off.

And in doing so, he reminded a lot of us that we’ve forgotten how to properly react to the ridiculousness that has become US politics. The video of his infectious laughter’s since gone viral. Celebrities such as Patton Oswalt and Kathy Griffin have weighed in with their support for Kack.

#GreenShirtGuy is @Alex_Kack. And I love him. I love you @Alex_Kack. Please promise me you will befriend Banjo Man, walk the earth together, and get into adventures. https://t.co/nQMLdcwsAS

For REAL. I think this should be our new collective wave of civil disobedience. I’m serious. Giant groups of us, at every event, our LOUD, laughing voices will be heard joyously above their bitter hatred. #GreenShirtGuy I think you’ve given us the answer we have been looking for! https://t.co/ZiSS9ahuY4

Tribalism and extremist sentiments over US politics have created a split landscape online. It doesn’t matter if you’re on Twitter, Reddit, Instagram, or even a knitting community: US political debate has become an arena where fire is fought with fire and gasoline is easier to come by than water. It’s apparent that this scorched Earth debate strategy isn’t conducive to healing a divided nation, maybe Kack’s response is the only appropriate one left.

It’s easy to spew platitudes and suggest there’s room for all opinions, or that we shouldn’t let our emotions dictate our politics. But it seems tone deaf to suggest that citizen outrage isn’t justified. We’re collectively grieving over the most recent pair of mass shootings, and the next US Presidential election will feature voters born after 9/11 who have never known their country at peace. We are in pain and we need relief.

Yep, this whole country has PTSD, people panic in times square after a motorcycle backfires thinking it was a mass shooting. pic.twitter.com/4w7rPbk2A4

Laughter isn’t always the best medicine, but sometimes it’s the only one that makes sense. Our hats are off to activists like Green Shirt Guy, Rob Bliss, and The Monopoly Guy – the people who remind us that US politics can be ridiculous and we should react appropriately when they are.

Hey @Alex_Kack Love the shirt! We’d love to send you some fresh ones for Date Night #GreenShirtGuy pic.twitter.com/5vWaDhmrVP

They’re made by Original Penguin. You can purchase one here on Amazon for now, but as of the time of this publishing only a couple sizes were still available in green.

Read next: iPhones now display a 'permanent' warning if you try to replace the battery yourself