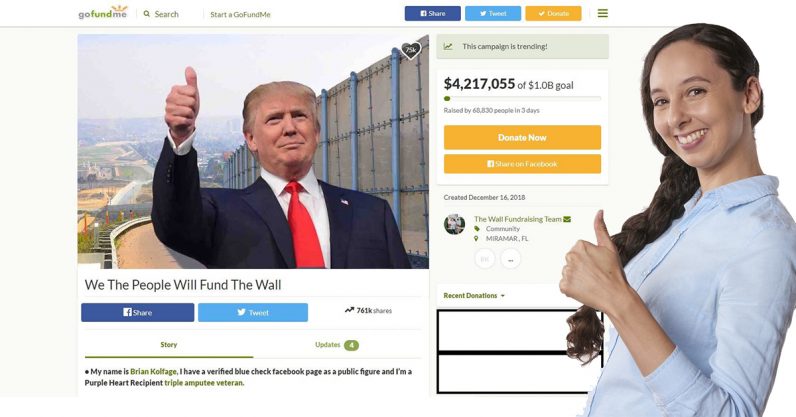 Despite the fact I haven’t announced it on Twitter yet (thus making it an official government document), I’d like to inform everyone that I wholeheartedly support the GoFundMe effort purported to be setup to fund President Trump’s border wall.

In fact, I’d like to take my support a step further by saying it’s my opinion that anyone who doesn’t donate to the GoFundMe, which you can find here, doesn’t support our President or his immigration policies.

I've been campaigning hard for five months to get clean water to Flint, Michigan. That Trump gofundme did $3.5M in three days for a racist border wall.

The GoFundMe, which was set up by an Air Force veteran, is absolutely legit. Wanna know how it’s not a scam? Here’s a quote from its page:

How do you know this is not a scam? I’m using my real name, my real information, you can contact me and hold me accountable. People who try to scam you will not be upfront with their information, they will hide and not use their name. I have a public figure Facebook page with a blue check mark issued by Facebook that verifies my identity.

For what it’s worth, I legitimately believe that he thinks this GoFundMe will actually fund the wall. And that’s why I’m willing to stand beside him and say: if you support Trump, you should donate all of your money.

Not some, not half, not 10% after tithing, but all of it. I know that’s not feasible for some of you, but as the president himself said “these aren’t people, they’re animals.”

I know if I actually believed that immigration and crime wasn’t going down, I’d give every red penny I had to doing whatever it takes to make me think I was helping keep the country safe. Facts be damned!

Not surprising people can raise $2 million in two days for a Wall on GoFundMe, but can't seem to figure out how to help the homeless Americans in their own country

Related reading: The CATO institute and the MAGA institute have differing opinions on the wall. But you gotta ask yourself, do you believe a bipartisan think-tank or do you believe our President and Commander in Chief, Donald J (the J is for “Jerry Falwell Jr. has faith in him, you should too”) Trump?

So I’m calling on every single MAGA supporter to give until it hurts. Your kids college fund? What’s more important, a liberal education or safe borders? Your anniversary gift? How about: “Happy 35th honey, I bought you a border wall.” Someone’s getting laid that night.

Here's a better border GoFundMe campaign. All funds raised will go to the Refugee and Immigrant Center for Education and Legal Services @RAICESTEXAS, a nonprofit that provides free and low-cost legal services to immigrant children, families, and refugees. https://t.co/71OC1cNDeb

The point is, we should never let anything – including reality or facts – get in the way of what’s important. It doesn’t matter if there’s absolutely no way that Congress will approve the wall because it’s a political hardline for most voters leading up to 2020.

And it certainly doesn’t matter that there’s a good chance that, because the GoFundMe isn’t to “build the wall” but to “fund the wall,” your donations will go directly to the pockets of billionaires, millionaires, lawyers, and lobbyists who simply “support” the border wall.

Last week we brought you the story of Amalia & SRO Miller. Media came today to share their story. We are so proud of Ofc. Miller, but even more in awe of the bravery shown by sweet Amalia & her family in her fight against leukemia. Amalia’s GoFundMe page: https://t.co/ptf74ZSMdl pic.twitter.com/B2MSlVDdc3

Sure, the person running the GoFundMe guarantees that “100 percent of the donations will go to the Trump wall.” But, as Trump pointed out when he said that “Mexico will pay for the wall,” there’s a lot of legal side-stepping involved.

Just to be clear about the advice I’m giving you: you’re not crowdfunding a wall, you’re crowdfunding money to support Trump‘s wall. And, as an added bonus, you’ll be owning the libs.

Donations to the Treasury cannot be earmarked by whoever makes the donation. Donations go into the general fund, like when you pay your income taxes, and then it’s up to Congress to decide how that money is spent. Now, in theory, Congress could pass a law creating a special mechanism to let people earmark their donations just for building the wall, but there would be a lot of steps involved to make that happen.

But don’t worry about how Congress would need a bipartisan effort to create this special provision. Just concentrate on owning the libs.

MAGA dad- WELL ENJOY THEM TEARS! WE OWNED THEM!

Look, I don’t want to talk you out of this. I believe with every ounce of my being that, the more Trump supporters give to a cause like this: the better this country will be. In a perfect world, you’d donate the full $5 billion the gentleman running the operation is asking for.

Note: GoFundMe doesn’t allow campaigns with goals higher than a billion dollars, so let’s knock these first four billion out quickly shall we?

Never you mind that you can’t buy the House (Democrat majority) and that, mathematically, you won’t be able to raise the funds with the supposition that “If the 63 million people who voted for Trump each pledge $80, we can build the wall,” within the next two years unless you all donate immediately. At the current rate, which has led to a little over $5 million at the time of this writing, it’s going to take a lot longer.

The GoFundMe for the Wall has raised about $3 million in 3 days.

Racists are bad at math.

And, weird as it sounds to Trump‘s core supporters, the majority of Congress isn’t actually arguing over the money.

The argument is over the efficacy of the wall, the fact that most undocumented immigrants enter the country legally and then overstay, that drugs are almost always muled across the border by people, ships, and planes entering legally, and a dozen other facts.

But screw those facts. Only a liberal wants a bunch of “dangerous hombres” waltzing across our southern border. One is too many, amirite?

Never forget: only a liberal or a Never-Trumper would worry about whether they’ll get their money back when the wall is never built. It’s about the principle. It’s about pumping this thing up so big that when it ultimately explodes (as there will never be Congressional support for Trump‘s wall) the entertainment value alone … ahem, sorry.

What I meant to say was, let’s get this GoFundMe funded to the max!

Meanwhile, those of us who don’t support the wall should consider donating to local veterans support groups and volunteering our time and energy to helping our homeless warriors. Trump‘s looming government shutdown will disproportionately affect veterans.

After serving our country, it’s beyond the pale to imagine our surviving warriors spending Christmas without a paycheck because the President can’t get government support for his passion-project.

Read next: 6 things to keep in mind when designing voice UI