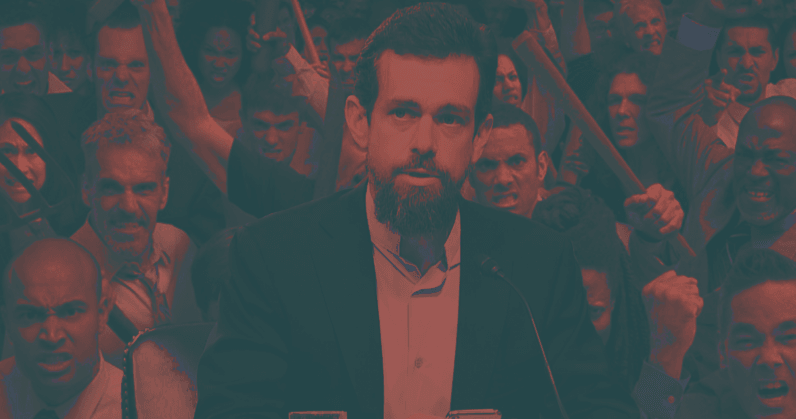 Stripped of context, Twitter CEO Jack Dorsey’s comments sound a bit like an admission. Speaking to members of congress, Dorsey told a room full of senators that Twitter “unfairly” reduced the visibility of more than 600,000 accounts recently. A quote that, in just days, will serve as bulletin board fodder that whips conservative constituents into a fundraising frenzy for the upcoming midterms.

It’s context, though, that matters. Dorsey’s broader sentiment was that he and his team made some mistakes in testing an algorithmic way to surface relevant content via a new quality filter. As a result of those mistakes, some accounts — belonging to both Democrats and Republicans — were harder to find in search, and may have had their messages down-ranked based on their following’s behavior.

Dorsey reiterated that the platform relied on “hundreds of signals” employed to help his team decide “what to show, down-rank, and filter.” He also stated, again, that Twitter “does not use political ideology to make any decisions, whether related to ranking content on our service or how we enforce our rules.”

He was then asked what percentage of these “unfairly” treated accounts belonged to conservatives. Dorsey balked, stating he didn’t know the answer.

The answer, of course, is as unknowable as the question is ridiculous.

Roger Stone, for example, was banned for harassing a CNN journalist. David Clarke for inciting violence in a tweet that said “Punch them in the nose & MAKE THEM TASTE THEIR OWN BLOOD.” Milo Yiannapoulos got the ban hammer for inciting abuse against actress Leslie Jones. Alt-right blogger Chuck Johnson got a permanent ban for making violent threats.

Twitter‘s trump card, in this case, is Trump himself. Trump is perhaps the most sought-after ban by liberal Twitter. Yet, his account remains. Ignorant rhetoric, by letter of the law, is not a bannable offense.

Alex Jones’ account is also active. While he did suffer a temporary suspension, it’s notable that Twitter chose not to delete his account even after everyone else — Apple, YouTube, Spotify, Google, and others — decided to. Twitter, in a truly unpopular decision, chose to allow Jones to remain.

Conservative rags like Breitbart, an outfit that’s as deserving of a ban as any other, is still posting. The Blaze is still alive and kicking. So are Fox News, National Review, PJ Media, Townhall, The Daily Caller, and others.

So who, exactly, is Twitter silencing if the most popular voices and outlets remain unscathed?

No-name accounts with 50 followers? Doubtful, but is that really silencing someone who was, for all intents and purposes, already shouting at the wall?

Shadow bans, right; the practice of censoring an account while allowing the user to keep tweeting as if it were active. Shadow banning is a funny thing, though. It tends to work better if the accounts in question aren’t seeing tens, even hundreds, of thousands of likes, shares, and comments. Twitter, write this one down.

It doesn’t matter, though. This is all context. Context, in a few days, will be irrelevant. In a week, tops, someone, somewhere, most likely speaking to a base of frenzied republicans, will spin Dorsey’s comments as an admission.