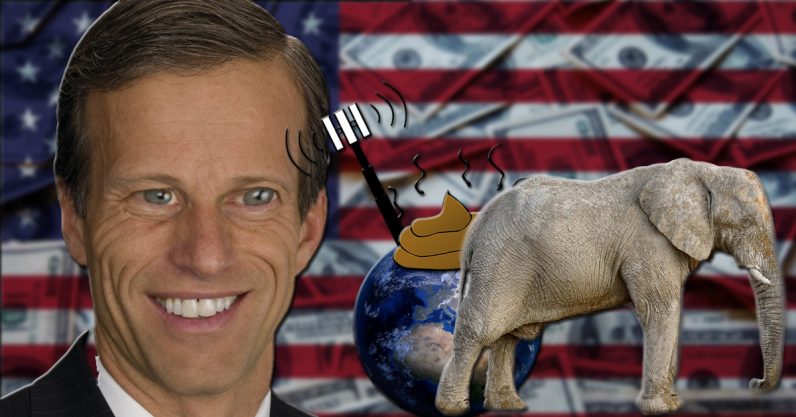 Senator John Thune is an asshole.

You’ll have to pardon my profanity, but the most transparent scam in US political history is unfolding in front of us and it’s difficult to parse information coming out of the post-truth world that Washington D.C. has become.

Let me start over: The US Senate today voted 52-47 in favor of a Congressional Review Act (CRA) to rescind the repeal of net neutrality. But according to Senator John Thune, if it were to miraculously make it to the House (which is likely to simply refuse to hear it) and even more incredulously pass there, it will be vetoed by the President. This isn’t a win folks.

We’ve said it before: net neutrality is dead and it’s time to move on. Because the real fight isn’t for Obama’s net neutrality, it’s against Marsha Blackburn’s.

Before we move on, it’s worth pointing out that the following GOP Senators voted to send the resolution to the House: Susan Collins, John Kennedy, and Lisa Murkowski. Kudos to them for caring about the problem.

But, today isn’t about solutions: it’s about drama. In the hours leading up to today’s vote, Senators on both sides were called upon to debate the idea of net neutrality. When I started writing this, I’d been listening to the debate for approximately three hours.

Here’s the three reasons why most of the GOP Senators urged the Democrats to vote against the CRA, according to Thune (paraphrased for brevity).

First: Net neutrality made it harder for ISPs to provide broadband access to rural areas.

This is demonstrably false. It’s shocking to think anyone on the planet buys that line, because of how…  many…  times… this has been shown to be an outright lie. But Thune says it with great passion, and that’s enough to convince some people.

Second: It was based on Depression Era rules for phone companies.

He says “regulations from the 30s implemented during the Great Depression to keep Ma Bell from having a telephone company monopoly” don’t apply in today’s modern world. He finds it incredible that anyone would think they do.

Really John? You can’t believe that people care about laws, rules, and regulations that are older than the technology they refer to, even if you can’t explain what about them is outdated? On the one hand, he’s an asshole. Here’s a flowchart I made to demonstrate as much:

And on the second of three hands (there’s too much stupidity for just two), he’s even more of an asshole. Protecting consumers never goes out of style. And furthermore the 2015 net neutrality bill was based on those same protections, but obviously terminology was updated — terms like “throttling” and “fast-lanes” didn’t apply to Ma Bell. Small bookstores in the 30s weren’t concerned that the phone company would slow down the words coming out of their phones in exchange for more money from Amazon.

But, if you look on the third hand, maybe he’s got a point. By his logic, the second amendment is pretty damn outdated. It could use a new glance-over by some sober minded people who aren’t avowed firearms enthusiasts. What’s that you say? It’s a non-starter? Oh goody, that’s how we felt about net neutrality.

Third: C’mon. Eh? C’mon! Trust us. Seriously, look at our face: why would Verizon do something that would hurt its customers just for more money? Never gonna give you up, never gonna let you down. Never gonna turn around and desert you.

Seriously, Thune said the reason net neutrality should be repealed is because telecommunications companies have promised not to throttle, fast-lane, block, or prioritize legal internet content, so there’s no reason to enforce regulations. Trust them. Wink.

The reality is: even though John Thune can’t give one truth-based reason for supporting the net neutrality repeal, he has 928,428 – each of them dollars.

It would have saved the taxpayers a lot of time and money if he and the other GOP majority-voters, rather than spend their half of the debate talking (lying), just dumped bags of money on the floor and pointed at the cash.