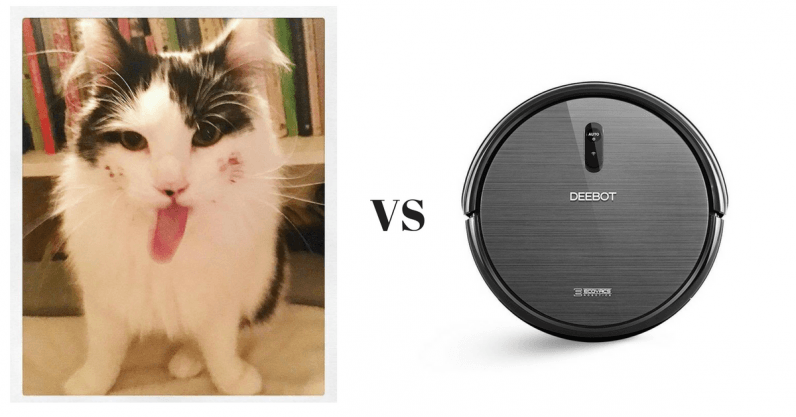 In at least ten ways, having a robot vacuum cleaner is like having a more useful cat. Ever since I got sent the DEEBOT N79S, a cheap robot vacuum cleaner made by Chinese manufacturer Ecovacs, I’ve been taking note of the similarities and differences – ending up with more of the former than the latter. Unfortunately the robot leaves my cat eating its dust.

It reminds me to clean up things it can potentially choke on, but in a polite way

Last week I caught my cat in the act of eating a piece of string. He got quite far, about halfway through the two meters he’d pulled off a curtain. I was able to gently extract it, avoiding a poopy strand dangling out of his ass for days.

My new DEEBOT handled a similar piece of string very differently. Instead of eating the whole thing, it stopped its rotating suck hole and started politely beeping at me to come free it. Now I scan the room it’s about to clean for anything that could possibly choke it, and clean up. Unlike my cat, who’d just go ahead and eat the string, DEEBOT teaches me to be a better person.

I have to provide it with nourishment, but can do so at my leisure

Every morning, the moment my alarm goes off, a hairy black and white face concurs loudly that it’s time to get up. The alarm I can snooze, the cat I can’t.

The robot vacuum cleaner feeds itself though. When its battery is running low, it finds its charging base and returns safely to load up on that sweet, sweet, electricity.

It makes me check on it when it makes unusual noises, without being manipulative

The first time I had DEEBOT clean a room with stairs in it, I was terrified. Every time I’d hear it get near the stairs, I’d run up to make sure it didn’t tumble off them. It never did. Thanks to a drop detector, it can avoid throwing itself off steps or even furniture. I learnt this after a while and relaxed.

My cat, on the other hand, has learnt to abuse this worry by blurting out an unusually disconcerting meow from somewhere upstairs whenever he feels like a head scratch.

It eats things it’s not supposed to eat, but not my human food

My cat loves human food. Also, glasses of water or chocolate milk I just got for myself. With my cat around, I can’t leave my food unattended. The robot ignores human food, but might eat a hairpin or two.

It can be petted, without necessarily liking it

As far as I can tell, the DEEBOT doesn’t posess sensors that register petting, so it’s not bothered when I reach out to touch it while it whizzes by minding its own business. It’s comforting in its predictability. With my cat, I never know if he’s going to appreciate a nice stroke or bite me. DEEBOT also doesn’t have any teeth.

It makes for entertainment while doing its thing, in a soothing way

Here's a dramatic dancing cat to brighten up your day pic.twitter.com/nGvzEPOk2d

Watching DEEBOT do his rounds is way up there with all those soothing 10 hour videos of things like a train ride from one Norwegian village to another. It’s like a fireplace that you can just sit and stare at, but for the 21st century.

There are even little games you can play in your mind while watching; where will it turn next, will it sweep that piece of dirt there into its aspiration cavity, or will it hit that chair leg?

It forces me to move things it could break, but not forever

We’ve all seen videos of asshole cats shoving things off tables on purpose. My cat enjoys chewing on my poor plants while looking me straight in the eye. His dickishness has already made me move things from somewhere where they look good, to somewhere he can’t reach. Or I can see.

DEEBOT also requires this, but in a way more subtle way. He just loves getting stuck in curtains, rugs, and under certain chairs. This means I have to move those, but only when it’s doing its work. Not all the time. And not to places where they’re permanently out of site.

I have to clean its litter container, but can do it when I want

For whatever reason, my cat loves taking a stinky dump the moment I’ve sat down for dinner. It might be because I normally go to the bathroom after I’ve fed him in the morning, and he’s just returning the favor. Anyway, after he’s done scooping litter onto his gift, I have to clean out his poop.

The DEEBOT also needs me to clean the box where it deposits its litter, but allows me to do it at my leisure, and without spoiling my appetite.

It can be left alone, and be civil about it

Like a cat, the robot vacuum cleaner is comfortable being alone for a while. I can even set it to automatically clean at certain times on certain days. Unlike a cat, it doesn’t do other things like turning the couch into a hair repository or find out tea bags make for great toys, especially if you scatter its content all over the floor.

It endears, but not in a fuzzy way

The DEEBOT’s dumb persistance works endearingly, like watching a baby animal flail around. My girlfriend even gave it a name: Dinand, after the lead singer of Kane, our local Dutch version of Nickelback.

It’s cute. But it’s not cuddly, unfortunately. For all its flaws, my hairy ball of fur still wins out. But only until robot vacuum cleaners become warm and furry.

Read next: Google's Song Maker lets you easily compose music within your browser