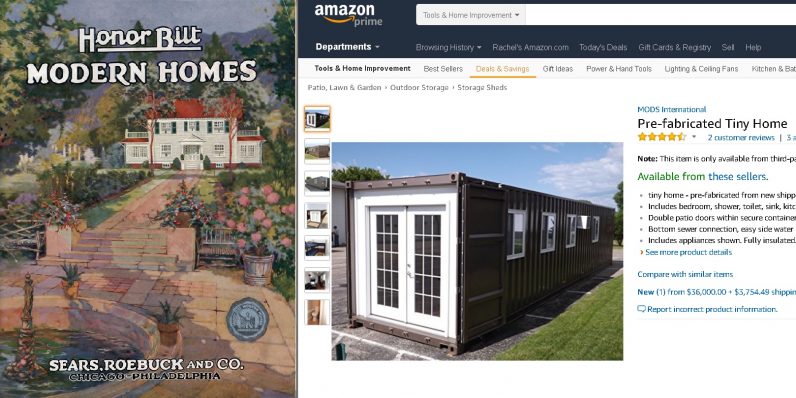 One of Amazon’s most recent Prime items has caused a bit of a stir — because it’s a house. You can now buy a house on Amazon and have it shipped directly to your location. But, surprisingly, that’s not new, and Amazon’s playbook is starting to look a lot like one that originated in the late 19th century.

When reporting on this … unorthodox form of real estate, Apartment Therapy referred to Amazon as “the Sears catalog of this generation.”

Speaking as someone who owns and has thoroughly perused 1902 and 1927 editions of the Sears & Roebuck catalog, I can see the parallels between Amazon’s plethora of weird and wonderful items and what you might find in the old catalogs. Sears even sold houses (or house kits, more accurately) for years in the catalog — up to 75,000 of them, according to Sears itself. So Amazon is not the first mail-order retailer where you can have a whole home shipped to you.

According to the Objective Standard, founder Richard Sears’ motivation when printing the original catalogs were apparently to sell watches to rural families “who were being gouged by local general stores and an army of middlemen.” Amazon isn’t much different in terms of disrupting traditional businesses. The point of offering everything in a Sears & Roebuck catalog was to open up new markets through convenience.

Customers who never previously had the opportunity to get certain items, due to being limited to stores in their immediate vicinity, could not only get them, but have them shipped straight to their door.

For example, if you wanted to buy a turtle and its accoutrement, you’d have to go to a special shop, select the animal, and then take everything home yourself. But with the Sears & Roebuck catalog, you could order it and have it shipped to your home. What we take as rote from Amazon today was no doubt mindblowing for a family in 1896.

So Amazon is slowly completing its transformation into a Sears-like everything retailer, up to and including houses. Now if only they can sell me a turtle on Prime, it’d really become the modern day version of the Sears catalog.

Read next: Billionaire financier weighs in on the future of Bitcoin [Updated]