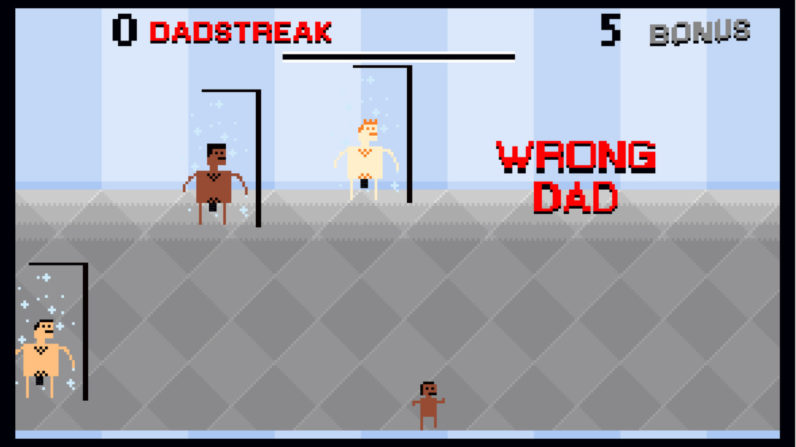 Perhaps you heard about it when it launched in September 2015, but in case you missed it – I feel it’s my duty to introduce you to what may be the most traumatizing game in history….. the Shower With Your Dad Simulator.

Developed by Marbenx, it’s an equally fun and disturbing 8-bit game that reminds you of the awkward times in your childhood when you took showers with your dad.

The premise of the game is simple. You’re lost in a random shower room with a few moustache-rocking dads around, but only one of them is your own. You need to quickly find him and take a shower with him – and as weird as it may sound, this is how you score points.

The game comes with several alternative modes like ‘Endurodad’ where you have to identify your dad among the others as he keeps reappearing in different places. There’s also the ‘Dadathlon’ and ‘Dad Divisions’ modes as well as a few others that you’ll have to unlock yourself.

Besides its bizarre concept, what makes the Shower With Your Dad Simulator so fun is that the game gets gradually more difficult, adding new but equally eccentric hurdles along the way. For example, more dads to confuse between and shower curtains that make it harder to find your own dad among the rest.

Compared to other titles from last year like The Witcher 3 and Fallout 4, the game is certainly nothing groundbreaking. Even so, it’s surprizingly amusing and the slew of positive reviews unequivocally prove it.

Yet Shower With Your Dad is not the only game that’s confidently going against the grain with its simplicity. More recently, other titles like Playdead’s Inside and crowdfunding success Superhot have also enjoyed overwhelmingly positive reception despite their technological modesty.

These games prove that in spite of all the progress we’ve seen in game development over the years, creative simplicity still has a role to play.

This is also what excites and strikes me the most about the Shower With Your Dad Simulator. Despite its controversial and perhaps even problematic subject matter, the game still succeeds to entertain – and it’s precisely its simplicity and innocent friskiness that accomplishes this.

That being said, I don’t think 8-bit games are making an unexpected commercial comeback, and probably for the best.

But what game developers can learn from the Shower With Your Dad Simulator and other similarly technologically humble games is that inventive simplicity goes a long way – and there’s always a way to put a new twist on an old concept and still make it work.

Go deal with your daddy issues with the Shower With Your Dad Simulator here. At ¢99, it’s certainly cheaper than a shrink – and perhaps even more therapeutic.

via Ethan and Hila (h3h3productions)

Shower With Your Dad Simulation 2015 on Steam

Read next: Nobody is talking about this incredibly sexy iOS 10 emoji