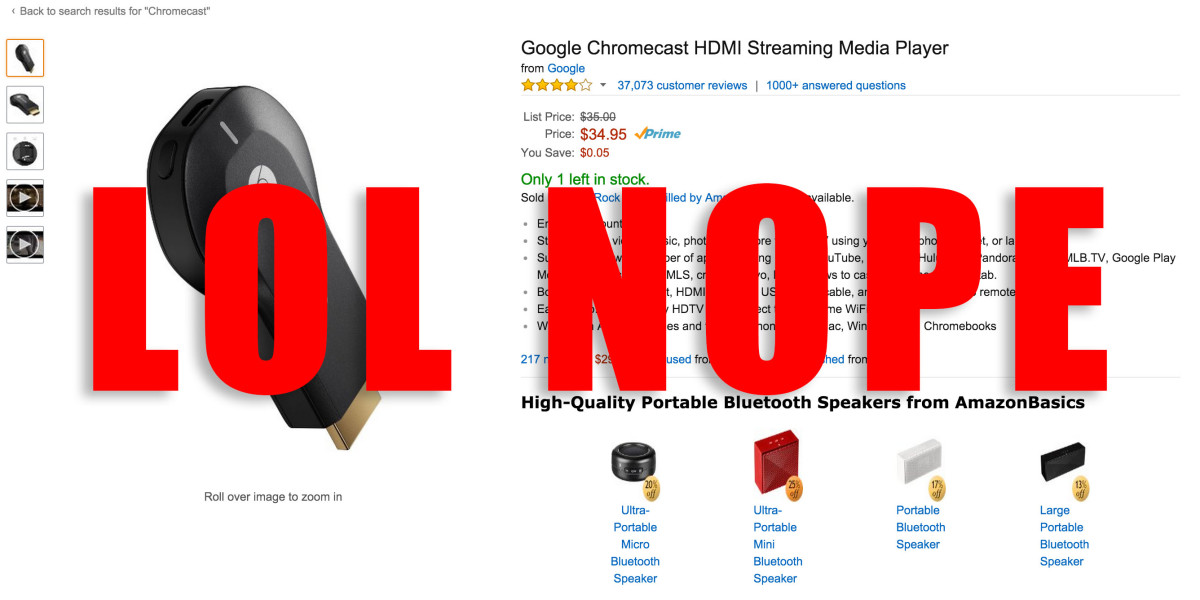 Amazon will stop selling certain competing video streaming products, according to report by Bloomberg, which TNW has confirmed. It kinda sucks.

Amazon emailed its marketplace sellers to indicate it will stop selling Google’s Chromecast and Apple TV next month. No new product listings will be allowed, and any existing items will be removed on October 29.

Over the last three years, Prime Video has become an important part of Prime. It’s important that the streaming media players we sell interact well with Prime Video in order to avoid customer confusion. Roku, XBOX, PlayStation and Fire TV are excellent choices.

The problem is, ‘customer confusion’ is a lousy answer. That’s not to say people who buy Chromecast or Apple TV don’t care about Prime Video (I like me some ‘Mozart in the Jungle,’ and I wish I could stream via Chromecast), but completely eliminating sales of competing products is just a lazy move to weaken Apple and Google’s sales.

If Amazon truly wanted to just avoid customer confusion, it could have easily added a warning on product listings. Something like ‘Note: This product does not work with Prime video, so our dongle is better‘ in big red letters with shiny Myspace glitter.

Actually halting sales is a shady business move, particularly considering new Apple TV and Chromecast models were just announced in the past month, and that Apple and Google are Amazon’s biggest hardware competitors. Of course, you can buy those products elsewhere, but that means losing Prime membership benefits, and will likely make many customers consider other streaming products instead (which is no doubt what Amazon wants).

Moreover, it sets a worrisome precedent; it’s the first time we can tell Amazon has stopped sales of a popular product simply because it didn’t like it (other than confederate flags, of course). Who knows what will happen next time Amazon has a problem with a competing device.

Up until now, Amazon’s retail store has operated relatively independently from its hardware products, aside from some unobtrusive ads on the front page. Amazon has every right to promote its own products above others, but removing Apple TV and Chromecast is both cheating its consumers, and hurting its marketplace vendors that make most of their profits from selling through the retail giant.

Make no mistake, this is not about customer confusion, it’s just Amazon dangerously flexing its retail muscle in a way it never has before. Let’s hope it’s a one-off event, but I’m not so sure.