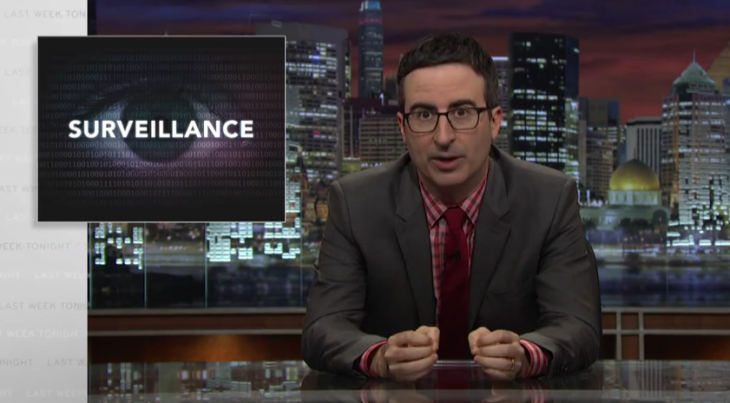 Over the last three years, it seems like we’ve been positively inundated with leaks about government mass surveillance thanks to Edward Snowden’s stolen NSA documents, but in reality, how many people actually cared?

As increasing amounts of documents were released by news organizations, it became harder to follow the story. Many of the releases were heavily technical and reporters failed to relate just how important they were to the masses.

In this week’s installment, Oliver traveled to Russia and interviewed Snowden in person about surveillance ahead of the June 1 deadline for government reauthorization of some portions of the Patriot Act.

The interview is amazing viewing for a number of reasons, but it may be the first time anyone’s ever challenged the way Snowden actually thinks about how the documents are positioned for the masses. It provides a real reason for everyone to be concerned about the revelations.

Oliver sets the tone at the beginning saying “we all want perfect privacy and perfect safety, but those two things cannot exist.”

In the interview, Snowden quickly launches into his well-traveled speech about why he stole the NSA documents and how much it matters, but Oliver quickly interrupts him to tell him that nobody takes any interest.

Snowden comes back with reasons why people should care — like the fact the NSA spied on UNICEF — but Oliver repeatedly tells him “no one cares,” then shows him a number of quick films where his crew interviewed people in Times Square to find out if they know who Snowden is and why he matters (they have essentially no idea).

Snowden even acknowledges that it’s a “challenging conversation” because most people have difficulty conceptualizing it, but keeps going back to contrived, technical explanations of why mass surveillance matters.

As the interview goes on, Snowden looks visibly upset and increasingly frustrated, but it takes a turn when Oliver starts pressing him to relate how the spy programs relate to peoples “dick pics” and Snowden goes through each one, explaining how they’ll see them.

It’s almost like a lightbulb goes off in Snowden’s head and the mood of the interview changes completely at this point: the mass surveillance conversation has been following a narrative that people don’t understand in a way how it relates to them.

He suddenly seems to understand why the general population just doesn’t take an interest: it’s a PR problem. I don’t think Snowden has ever been questioned directly on his assumptions about whether or not people actually care before now.

Boiling the NSA spying revelations down to something so simple doesn’t do the extent of the problem as much justice as it deserves, but it does relate it in a way that can compel people to look into it further and care on a deeply personal level about government mass surveillance.

Snowden isn’t entirely at fault here; technical people across the industry have a hard time relating why something as simple as using complicated passwords is something you should be concerned about, let alone why the issue of mass surveillance is important.

Oliver’s interview might finally enable people to understand why government surveillance matters to them and help set a new narrative for the future.

It’s just amazing that the mainstream media was unable to truly relate why you should be upset about the NSA spying on you before now.

Read next: Kaspersky Lab reveals spyware on the world’s most popular hard drives, suspects the NSA