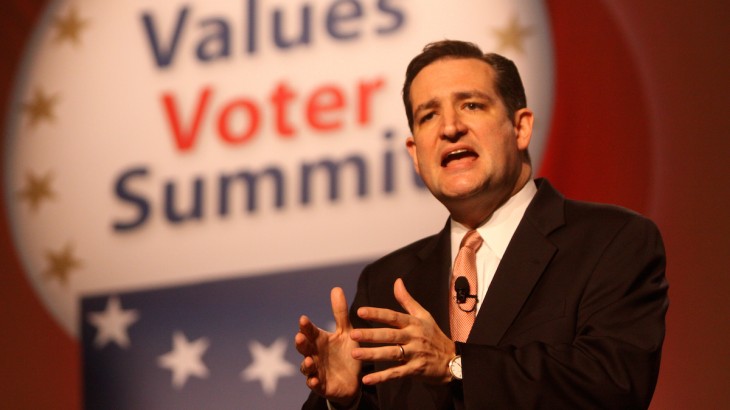 Ted Cruz’s announcement that he’s running for President included several references to his take on Net Neutrality. It reminded me, naturally, of my recent trip to Disney World.

Because while waiting in the long, long line for Thunder Mountain, it’s hard not to hate the guys with VIP tickets who glide right to the front. But the “wildest ride in the west” is not the most important ride in 2015. That’s internet access.

And if Cruz has his way, Comcast and Verizon will be like Disney World. Netflix will pay through the nose for that sweet, sweet VIP broadband while the next disruptive company – the one that you can’t even imagine yet? It will be stuck in line with me, and you’ll have to imagine it. Because it will never see the light of day.

Then it hit me: it used to be that only we nerds used a lot of technology. This ranged from nerds-lite, like me, who can’t code, to bona fide nerds who get annoyed when a guy who can’t even code calls himself a nerd.

But then, like a turtlenecked Prometheus, Steve Jobs gave the fire of technology to the rest of mankind. And also like Prometheus, the gods did smite Steve Jobs in an internal organ, and he was taken from us.

I digress. The point is that everyone uses amazing technology, but many can be confused about how it works.

Here’s where the snake oil salesmen come in.

They tell people… what’s that impolite term for what they tell us? Oh yes: LIES. Lies designed to make money. For example:
Throttles and Fast Lanes are Somehow Good for Consumers.

The complaints against Net Neutrality are well represented in the Orwellianly named, “Internet Freedom Act.”

Did you ever notice how laws with “Freedom” in the name aren’t pro-freedom? It’s kind of like how countries with “Democratic” or “People’s” in the name are neither democratic nor pro-people.

The false arguments go like this: Innovation thrives on the internet only when providers can charge whatever they want to whomever they want and dole out whatever speeds they want – and if you don’t let providers do this, the lack of profit will kill incentive to investment and thus the internet.

Second, we have a same system in the Netherlands where I live, and our internet speed would make an American blush.

Now, admittedly, the Netherlands and the USA are different markets, but the point is: Dutch companies still invest and still profit without being a monopoly or charging content makers rent.

Third, anyone who says monopolies create new products and lower prices versus companies that compete is living in one of those countries with “People’s” in its name.

Without competition, Apple offered choice in iPhone size like Henry Ford offered Model T color: you could have any screen you liked as long as it was 3.5 inches. With competition you can get a 6 plus, a 6 or even a 5. Remember when cute little phonette seemed big?

Pro-business people are supposed to support competition, right? And they usually do until they become monopolies. Or start receiving money from monopolies. Then they say things like this:

There was already plenty of competition for Broadband in America; 75 percent of American households have access to two or more providers.

Sure, this was true in when you looked at the old definition of broadband, 4MB download. But 4MB is high speed like Dancing with the Stars is high culture.

It’s not. 25 MB download speed, the standard set by the FCC in January, is barely high speed. And only 25 percent of households don’t deal with a monopoly in getting that 25 MB access. 19 percent have no high speed access at all!

So, are opponents (a) stupid and under informed, or (b) lying, perhaps due to pressure from moneyed interests? I hate having this conversation with my kids:

And Commander in Chief Cruz might be. But for most everyone else, it’s a Santa Claus lie. I suspect that, to paraphrase Upton Sinclair, “It’s difficult to get a man to understand something when he’s a goddamn liar in the pocket of cable companies.”

Here’s an idea for the cable companies: make content that people want. Pull a Netflix or an Amazon. My pitch: “Better Call Lowell,” a show that envisions the rise of Lowell C McAdam, CEO of Verizon, back in his days as a heroic cable repairman.

“Dammit, ma’am — I can’t stay and make love to you while your husband’s gone! First of all, you’re a married woman. But more importantly: I said I’d be at my next stop between 10 am and 5 pm, and when a cable man makes a promise, he keeps it!”

But whatever the cable companies do, they should quit fighting the new rules and stop complaining in Morse code. They should stop acting like losers, and act like winners.

Pretend they won the Superbowl and declare, “I’m going to Disney World!” They’ll love paying to skip the line at Thunder Mountain. They can even Leader of the Free World Cruz along and go to the Hall of Presidents.

Read next: How Brazilian startup program SEED lost track, and why it matters