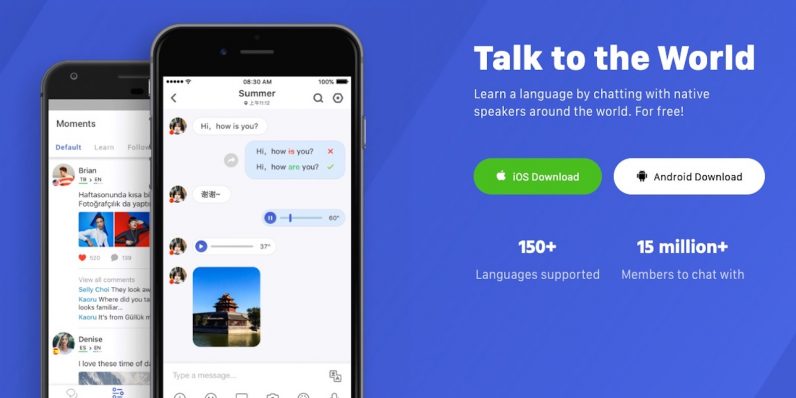 TLDR: HelloTalk is immersive language learning with native speakers and exercises to help you grasp your new tongue. And right now, it’s 87% off.

Immersive learning works. It makes sense if you think about it. Plunge a student headlong into a new area of study and the sheer volume, extra practice opportunities and increased contextual learning will help make that student proficient in their new skill faster.

Anyone who’s used immersion techniques in learning a new language can speak to its benefits. One study found Portland fifth-graders assigned to immersion programs did 13 percent better than their peers on state reading tests. And that number rose to 22 percent better among eighth graders.

We’re gonna assume you aren’t willing to return to middle school to learn a new language, so technology is here to help with the innovative approach offered by the folks at HelloTalk. You can get in on a lifetime of their VIP language training services now at more than $200 off, just $29 from TNW Deals.

At its heart, HelloTalk is language training handled primarily via cultural exchange. Once you’re a member, HelloTalk connects you with another of their 15 million members, someone who happens to be a native speaker in the language of your choice.

Meanwhile, that person wants to learn your language, and through a variety of exercises using texting, voice recordings, video calls and even doodles, you and your language partner are each guided to proficiency in your new language.

Even if you run into trouble, HelloTalk’s intuitive language tools like a built-in translator, pronunciation aids and on-the-fly corrections will keep your conversations running smoothly. And over 115,000 reviews on the App Store and Google Play combined can attest to HelloTalk’s power, with the app receiving 4/5 stars on Google Play and 4.7/5 on the App Store.

You can attack a whole new inspired approach to language acquisition with Hello Talk, especially now that their lifetime VIP services are slashed by nearly 90 percent with this limited-time deal.