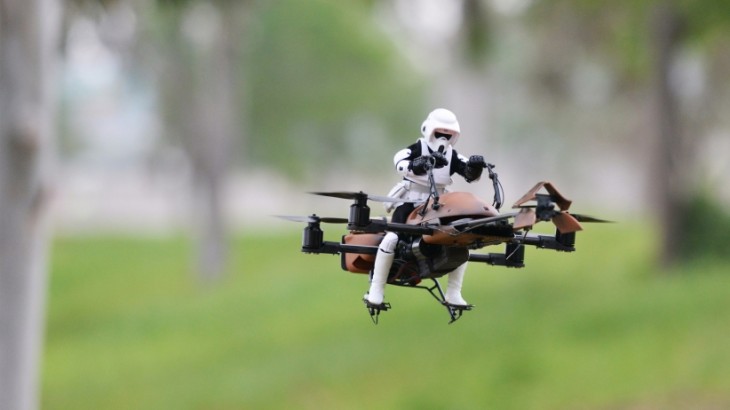 There’s something that connects Star Wars fans to drones and we can see why. For lovers of airborne action who also love sci-fi, these rugged flying machines are just the thing.

Below you’ll find the latest builds from drone enthusiasts, but we’re also looking forward to seeing your own DIY projects – the Code Black Drone and the Snowflake are still waiting to be manned by a Stormtrooper…

French quadcopter fan Olivier, who goes by the name Olivier-FR on Reddit, was the first Star Wars fan to famously combine his love of DIY with his love of Star Wars.

He created the skin for his flyer with $11 (€10) of foam and added $13 (€12) LED lights to the front and rear. Helpfully, he’s shared both the plans to build the drone itself and the Millennium Falcon frame.

“The Millenium Falcon Drone was fun, but now it’s time for the Dark Side” – that’s what Olivier must have thought when he decided to build another Star Wars drone: The TIE Interceptor. For this, he built the “Prophecy 355” quadcopter himself and placed a light foam insulate shell over it to achieve an authentic look.

You can keep up to date with his new projects on his YouTube channel. We’re keeping our fingers crossed that one day he’ll release a video of the ultimate battle between his two creations.

The idea popped into his mind when he started multi-rotor drone racing. The fast low-level flying reminded him of the Endor chase scene from the Return of the Jedi. Naturally then, this project was an obvious choice to combine his interest and experience in remote control flight with his love of Star Wars.