“My ultimate goal in film-making is to make a film which includes a smiling face snap of every single human being in the world.”

This quote is attributed to Yoko Ono, John Lennon’s now widow, in 1967. Lennon then told Rolling Stone in 1968: “The idea of the film won’t really be dug for another fifty or a hundred years.” And now, 45 years later, her #smilesfilm app will help realize this aim.

Developed by mobile marketing company Somo, in partnership with REVL8 Perfect Day, the app supports Ono’s large-scale participatory artwork that encourages the public to contribute to her global anthology of portraits.

Tokyo, Delhi and Berlin have already had a version of the exhibition, which were essentially enclosed gallery installations with a camera and computer on-site.

News of this latest project has been around for a while, with London’s Serpentine Gallery announcing last year that it would host the film exhibit in 2012. 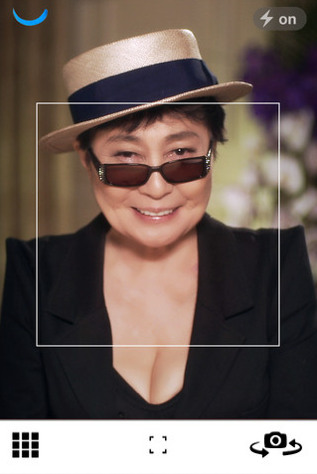 By clicking ‘Smile’ in the iOS app, users can upload images to Instagram or Twitter accompanied by the hashtag #smilesfilm.

The app’s Dream feature then uses geo-positional tags so pins appear on a white world map showing where others are taking their smiley snaps.

All images, which can be taken and tweeted online too (website going live today), will be added to the film.

A ‘Watch’ option also allows users to view the film in-app as users upload their images. So you can now view a photo montage of complete strangers smiling from around the world.

“Smiles transform moods and opinions, and with the power of mass participation, can change the world for the better,” says Ono. “This project is something that I have always wanted to do and now, using the latest technology, we’re finally doing it. Think PEACE, Act PEACE, Spread PEACE and Imagine PEACE. I love you!”

Yoko Ono’s exhibition will appear at the Serpentine Gallery in London, June 21 to September 9.