Quasi-anonymous posting service Yik Yak is trying to make it easier to report abusive posts and let users change their minds while voting. 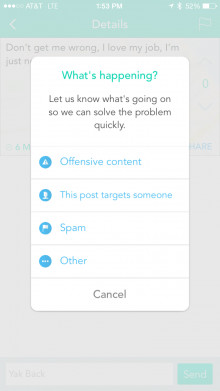 Previously, reporting a post just asked if the post was breaking one of Yik Yak’s rules. By adding context, it could help the company make a quicker decision if a post should be pulled from the system.

Yik Yak quickly became home to online bullying thanks to its localized posts and anonymous nature. The company has been working to keep bullying off the app and today’s update is another step towards that goal.

Users can also now change their vote on a post. If you voted something up, you can now decide that’s not worth your kudos and instead vote it down.