Xiaomi’s office is still humming way past 7pm on the day after their major product launch event. Employees typically end their days at 9.30pm after working 12-hour-long days here, and this commitment doesn’t end post-event.

For all the work that has gone into developing its products — the company says the recently-launched Mi 4 took 18 months of research and development, for example —  it is little wonder that recent claims circulating in the press about the company blatantly ripping off Apple’s products have hit its executives hard.

High-profile former Google VP Hugo Barra, now VP for Xiaomi Global, said in an interview that he thinks that people are making “sensational, sweeping statements before actually seeing our products and playing with them.”

Barra gets pretty worked up when he speaks about how media have been raining down on Xiaomi for copying other smartphone makers’ products — it has recently been called a ‘supercloner’ among other things. The surge in such claims coincide with the increased international attention Xiaomi has been garnering, and particularly after the launch of its tablet, the Mi Pad, which Lei boldly pitted against Apple’s iPad.

Another report has also battered Xiaomi’s reputation: the hawk-eyed John Gruber at Daring Fireball spotted that the Mi 3’s features page copied Apple’s Aperture logo. Barra admitted that the company did in fact make such a mistake, but that it was a junior designer’s “stupid mistake,” emphasizing that it was a silly error and not an attempt to outrightly copy Apple or mislead users. He said:

Inspired, but not copying Apple

Barra acknowledged that Xiaomi is inspired “by the world’s most talented group of designers,” but the company doesn’t blatantly copy Apple’s iPhone devices.

He notes that the Mi 4, for example, is quite different from the iPhone, though at first glance it does look like the iconic Apple device because of the chamfer (the finishing on the metal frame). Barra cited the separation between the frame and the body of the device, which is the thickness of a hair, the glass being closer to the pixels, the curvature of the edges, and even the buttons. The Mi 4 also has replaceable backs, which can be removed via a suction device to change to other ones.

These fine distinctions, however, tend to get lost amid the multitude of comparisons. Barra said that he understands where these harsh critiques of Xiaomi come from, and that he would be thinking the same way if he were still in the Silicon Valley, because “there’s a bias that says innovation cannot come from China.” He said:

The problem is that these people, being in the Valley, they don’t have access to any of our products. They’ve never played with a Xiaomi device before, they’ve never seen it, they read about it but they don’t actually play with them.

You pick up one of these devices, you power it and play with it — then you can start to understand that what we’re doing is pretty unique. Play with MIUI (its Android-based firmware) and discover features in MIUI, and if anything, you can say that Apple copied some stuff — and others, by the way.

He cited the ability to access the flashlight from the home screen, saying that MIUI has had such a function since three years ago, but Apple added it only in iOS 7. The local search function in the Google dialer, introduced for Android KitKat, has also been present on MIUI for a “long time.”

To further prove his point, he noted that ideas get passed around in the tech industry so very often. Quick settings, for example, was arguably pioneered by Samsung — but Apple has now taken it and let users swipe up from the bottom instead. “Apple actually borrowed an idea that had been in the industry for a while and made it better — Apple’s quick settings is better than anyone else’s,” he said.

Yet because of the lack of interaction with Xiaomi products, it is hard to fathom how the Chinese company is more than just a mere replica — and this extends to Barra’s tech industry peers.

“Everyone in the Valley, when I bring our products and show it to them, are puzzled. Because we’re doing two impossible things, what were previously thought to be impossible,” Barra said. He mentioned that for one, Xiaomi is selling high-performance devices for anything between a third to half the price of rival devices, partially because of its business model that sees it selling direct to consumers. At the same time, the product’s looks actually manage to match up when compared to the golden standard in the industry, which is the iPhone.

However, it seems like Xiaomi is inviting Apple comparisons, and in turn criticisms that it copies Apple, simply because CEO Lei Jun has repeatedly compared Xiaomi’s latest devices to Apple’s iPhone or iPad when he takes to the stage to unveil new products.

Barra tries to explain the rationale for this by saying that it’s a very “Chinese” approach. “The iPhone is thought to be the most beautiful, the most nicely-designed product in the market. So the natural thing to do is to compare what we’ve built to the nicest product that exists in the market,” he said.

But Lei’s “One more thing” slide after unveiling the Mi 4, which was a Steve Jobs signature, was a surefire way to lead to even more Apple clone accusations. This, however, comes in a Chinese setting — Barra noted that Lei’s aim was to crack a joke to a Chinese audience that still finds such a reference funny, as well as acknowledge the brilliance of Jobs.

“Lei Jun had a side smile when he said that, it was both a hat-tip to the great Steve Jobs but also a joke as well, having fun. All of those people in the room; they grew up watching Steve Jobs’ keynotes and loved it… If (those critics) were in the room and understood what was going on, they would have laughed along — it would have been a nice ice-breaker,” he said.

Barra insisted that Xiaomi is just seeking to improve on current ideas in the smart devices market — and instead of putting resources into trying to make its devices particularly different, the company would rather invest its time in making things better. He told us:

Innovation is a process of iteration. It has always been. There are no new ideas. There are improvements over ideas all the time. The approach we’re taking with everything that we do is: we’re trying to exceed user expectations at all times.

Users may or may not have expectations about how something works. When they do, what we try to do is take what it is and make it better. People expect things to work in a certain way — how about it working in that same direction but being significantly better?

The problem, however, is that design-arounds tend to be efforts to skirt infringement of IP laws and avoid landing up in an epic battle in court (think Apple and Samsung’s lengthy patent lawsuits). Barra, however, was not afraid to say that he thinks the patent system is “completely flawed.”

The point is that the world has to change. The patent system is completely flawed…

It hinders and stops innovation from happening. It’s such a waste of energy and resources to have a large group of engineers trying to come up with a way to do something different, rather than investing their time into making it much better. Because the next set of engineers can come after that and make it even better. At the end of the day, everyone wins.

Barra said that Xiaomi is currently a profitable company, which makes it seem like the approach may be working, at least among its customers in China and other Asian countries, many of which are emerging markets.

Other than revenue from the sales of Xiaomi devices, the company also makes money from selling a wide variety of accessories (think phone covers, power banks and even soft toys of its mascot, the Mi Rabbit), and gets a cut of any transactions that are conducted via the services offered on its MIUI OS.

The challenge, however, is getting the full experience of a Xiaomi device into the hands of all its overseas customers, which Barra himself admitted is something that’s still lacking. “A big part of the uniqueness that we sell, and that people experience here in China, comes from the services that are not yet available internationally, because we still haven’t had the time to build it,” he said.

And what kind of services are these? At the Mi 4 unveiling, Lei highlighted a few: one of them is an Interactive Voice Response traversal menu that gets displayed on-screen when you dial into an automated call, and the other is a menu pull-out that appears when you ring a delivery service like McDonald’s. 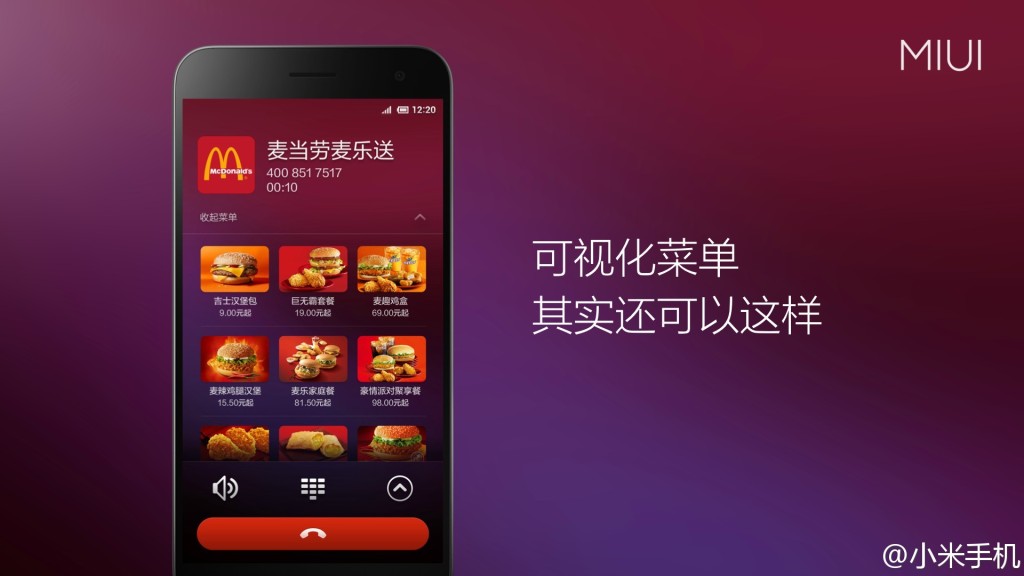 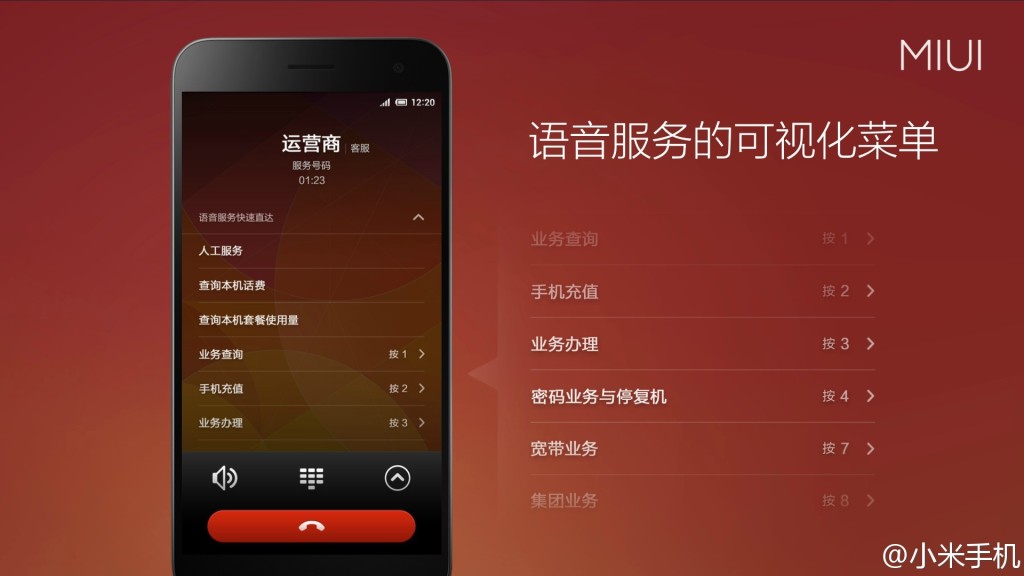 Xiaomi will be opening a research and development center in India in the near future as it seeks to start building such localized services for its overseas markets. The company just launched its first phone in the country, the Mi 3, in partnership with e-commerce juggernaut Flipkart.

This looks set to be the game-changer if Xiaomi goes through with it — as it could really help to differentiate the Chinese smartphone maker from all those Apple copycat claims that have been plaguing it recently.

But Xiaomi still has a lot of work to do to raise awareness about how it’s innovating in the products it has created. People can’t be blamed for simply seeing product images and pinning them as Apple rip-offs — Xiaomi needs to reach out to them and put its devices in more people’s hands as it seeks to solve this reputation problem.