Calling someone an Apple fanboy (or worse, fanboi) or a fandroid is usually meant to be an insult, but supporters of Chinese smartphone maker Xiaomi have no trouble calling themselves fans. They may be the new kids on the block, but they’re definitely some of the most loyal.

Xiaomi got its start two years ago with its MIUI skin for Android. Last year, it released its own smartphone, called the Mi-One, and went on to sell over 3.5 million units of the device. The company has also developed a Miliao IM chat service that just passed the milestone of 1 million simultaneous online users.

When Xiaomi unveiled its Mi-Two smartphone a few days ago at a high-profile media event in Beijing, more than a thousand of its fans, who call themselves “mi fen” (米粉) in Chinese, were in attendance.  The phrase “Mi fen” is a pun that is shorthand for “Xiaomi fan” and also means “rice flour”, a clever play off Xiaomi’s name, which means millet or “little rice” (小米).

Something about the Mi-Two unveiling seemed familiar and the more I thought about it, the more I found similarities between the newly-emerging ‘cult of Xiaomi’ and fan communities for Apple and Google.

Co-founder Lei Jun has a charismatic personality that inspires loyalty in his customers in much the same way that the late Steve Jobs did for Apple. Jobs was a masterful orator, and Lei took a few pages from his book for his keynote at the Mi-Two launch. The way in which he kept the audience waiting to hear the price of the new phone (an impressive $315 or RMB 1,999, by the way) was as Jobsian as any Macworld or WWDC keynote I’ve seen.

With his black shirt and jeans, Lei even bore a resemblance to Jobs, who was known for wearing a black mock turtleneck and jeans. Though Lei has resisted the comparison between his preferred outfit, which he says is a plug for Vancl, an ecommerce company he’s an investor in, and Jobs, he has acknowledged that the Apple co-founder was an inspiration to him.

The 43-year-old Lei, whose net worth is believed to be more than $1 billion, formerly served as the CEO at Kingsoft and was one of the co-founders of Joyo, a Chinese ecommerce site that partnered with and was later bought by Amazon. In additional to Vancl, he’s also an investor in several other successful Chinese companies YY and UC Web.

Xiaomi’s similarities to Apple were especially apparent when the company announced a “1S” upgrade to its first-generation phone. So far, the company appears to be following the single model, multiple generation strategy of the iPhone.

Whether or not Lei himself is willing to make the comparison, his fans certainly have. Forbes notes that some Chinese have taken to calling him “Lei bu si”, a tongue-in-cheek reference to “Qiao bu si” the Chinese translation of Jobs’ name.

You Say You Want a Revolution

For a company to inspire true loyalty in its customers, it needs a message. Both Apple and Google have had missions that have resonated with their followings, and Xiaomi is no exception. Take for instance, the name of the company, which co-founder Lin Bin says is a reference to a Chinese phrase for revolution.

Politics in are a highly sensitive topic for corporations in China, and Xiaomi has largely steered away from any controversy that could jeopardize its relationship with the central government. It has, however, cultivated a subtly counter-cultural image that appeals to the younger generation. 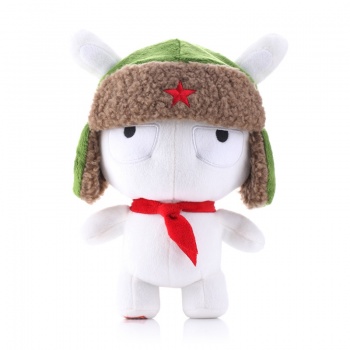 Then there’s the Mi-bunny character that the company uses as its mascot. Its red scarf, a reference to the Young Pioneers of China political organization, and its old school communist worker hat evoke Chinese national pride, while the silliness of the rabbit softens the rhetoric and even playfully inverts it.

T-shirts might sound like an odd reason for arguing the development of a loyal fan base, but in today’s world of hyper-branding, they’re a must. Recognizable t-shirts give users an opportunity to declare their allegiance and adopt the company’s style as their own.

Apple has done this to significant effect. The shirts that employees at its Apple Stores wear have become so iconic that knockoff Apple Stores in China copy them in order to look real.

Meanwhile, the company’s practice of giving out limited edition shirts at (real) retail store openings has also helped build identity among its customers. When the iPad officially launched in China, one man spent two days camping out in front of an Apple Store with a homemade blue shirt that said “I buy iPad No. 1.”

Xiaomi understood the power of the tee at its Mi-Two launch. Employees wore different color shirts depending on their tasks. Not unlike the blue-shirted clapping gauntlet at Apple Store openings and product launches, orange-shirted greeters formed a line at the entrance to the venue, while workers in black shirts worked to corral media away from Xiaomi’s key executives. Special Mi-Two launch t-shirts were included in bags given to attendees, so the hall quickly turned into a sea of orange.

Graphic t-shirt designs are on sale on Xiaomi’s website to let Mi fans proudly represent. Interestingly, some of the shirts are cheeky, such as the below design where the Mi-bunny is fixing the robot. The company also sells other accessories like dolls and dongles that promote the “mi fen” culture.

Xiaomi has also been active in engaging with its fans on social media like Sina Weibo. It teased the release of the new phone on Weibo and frequently runs promotions on the service giveaways. The company also maintains a Twitter account, but the account doesn’t have a large following there, most likely because the service is unavailable in China.

@SilverCor3 Hi, thanks for your interest. That's possible…Xiaomi will go further in the future. :)

For now, Xiaomi’s fan base remains largely Chinese, as it has yet to market its phones outside of the country. The company does have international aspirations, though. Engadget recently reported that, according to a source, Xiaomi phones will launch in Europe next year. When that happens, it’ll be interesting to see if Mi fan culture transfers overseas.

Growing beyond China will be an important move for the company, though, since it has billed itself as a low-margin phone maker. Lei revealed at the Mi-Two event that the new phone is being sold at a loss, based on calculations of 3 million devices sold.

“We are not looking to make any money, or to make Xiaomi profitable, for the next two or three years,” Lin said earlier this year.

The company should be set up for the long haul, as it just raised $216 million in a Series D funding round that valued it at $4 billion.

Xiaomi might not be making money yet, but it’s building a loyal fan base that should help the company succeed. And, judging by the photo below of the bathroom sign at the event last week, it’s at least having some fun with it along the way.