If you are a wrestling fan, you may have already noticed that the World Wrestling Entertainment’s website, WWE.com, got a big redesign this weekend.

According to its Senior Vice President (SVP) of digital operations, Jason Hoch, WWE was aware that it was increasingly a social TV brand, and every live show it broadcast triggered hundred of comments from its huge fan base on Facebook and Twitter.

“Our live events often land in the trending topics, because they generate a lot of passion,” Hoch says. Numbers speak for themselves; the WWE show Raw was ranked as the first social TV cable show by Trendrr in fall 2011, with 7% of the total social buzz for all shows.

The intent of this new website is now to take social TV one step further. Having previously worked at Discovery Communications, Hoch was familiar with the work of the real-time solutions company Echo, and it resulted in a partnership in which Echo’s technology is now powering the site.

According to Chris Saad, Echo’s co-founder and chief strategy officer, the relaunch means that the entire WWE site is now in real-time and social. “Its DNA has completely changed,” he told us. “It now acts both as a real-time conversation channel and as a companion to on-air broadcast.”

In other words, the change is much deeper than launching a second-screen app – although Hoch did confirm that WWE is also working on an iPad and smartphone app to reach users where they are.

Instead, social and real-time features got injected at every stage of the WWE experience – and will be available 24/7, even when shows aren’t on air. Here are a few screenshots of its new look:

As you can see above, Echo and WWE introduced a power ranking, which shows in real-time how popular its ‘superstars’ are on the Superstar Chatter. Similarly, a Trending Topics box lets users see which topics are the most popular.

Importantly, fans don’t have to leave WWE.com to react, and can comment directly from the page they are visiting – for instance from the interaction page, which aggregates conversation from different sources. 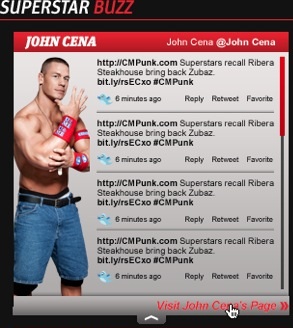 For WWE, this obviously represents an opportunity to aggregate and monetize a conversation that was already happening outside of its website. However, Hoch believes the company is also creating a lot of value for wrestling fans around the world. One of the specificities of this sport is how accessible its stars are for their online fans, and the new platform will likely reinforce this real-time interaction.

As part of the relaunch, WWE.com is also opening the possibility for fans to comment on its articles, with a box that prompts them to “add [their] voice” to the discussion. While Echo’s technology includes built-in filters against spam and offensive content, it will be an interesting opportunity for WWE to get comprehensive feedback on its articles, which the editorial team will take into account for future posts.

Do you like WWE’s redesign? Let us know in the comments.