Salesforce acquired Clipboard last week, less than a year after the Web clipping and sharing platform officially launched to the public.

While that’s good news for some, such as the good folks at Clipboard, this now means the service is scheduled to close on June 30. This is why Keeeb has been working overtime to capitalize on Clipboard’s imminent closure.

Just to recap, Keeeb was founded in December 2011, before moving into public beta in May 2012. Since then, the company’s been iterating steadily, adding more features and it eventually relaunched earlier this year sporting a fresh design and optimized back-end.

“We are also currently working with large brands and corporations here in Germany that are using Keeeb for various reasons,” explains Keeeb founder and CEO Konrad Gulla.

The Hamburg-based startup has just rolled out personalized Keeeb domains too, letting users nab their own Keeeb.com/yourname profile page.

Given Keeeb is a close competitor to Clipboard, we thought we’d take a look under the hood to see what makes this Web app tick. Oh, and Keeeb has also developed a special import function to make it easier for users to jump on board before the Clipboard ship sails for good. 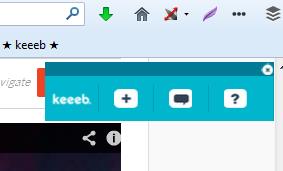 Once you’ve created an account (quick and painless), you’ll be prompted to install the little Keeeb bookmarklet in your browser. Whenever you want to save a piece of content, this is the button you hit – and you’ll know it’s ‘active’ when you see the little floating Keeeb box on your screen. This is mostly just for show though, letting you know that you can begin ‘Keeebing’.

You can highlight any text, video or image-based element on a page. So, for example, you can select a paragraph, click the resulting pop-up and save it to your desired Keeeb page.


Similarly, if you want to save a YouTube video or image, you simply hover over it with your mouse and you’ll see a layer upon it. Click, and then save it to your desired page.

You’ll also see a second option next to ‘Save’ that lets you create sub-groups of sorts on a given Keeeb page. This automatically silos specific elements together if, for example, you wish to separate videos from text. You can also do this manually on each Keeeb page by dragging one element onto another, though I found it a little awkward and counter-intuitive when it came to un-grouping items.

Within your Web-based profile page, you can create any number of pages and give them a more exciting name than I have.


The end result should/could look a little something like this.

All Keeeb pages are open for sharing to anyone – the recipient of a ‘share’ doesn’t need to have a Keeeb account, which is vital for virality I think. And you can also Rekeeeb someone else’s clipping, saving it to your own profile, or opt to share it through Facebook, Twitter or email.

As with Clipboard, the most obvious comparison with Keeeb from a visual perspective is Pinterest given the board-based layout. But looks can be deceiving, as Keeeb is more of a rich media Web clipping service similar in many ways to something like Evernote’s Web Clipper. But even that comparison does this a disservice.

As things stand, Keeeb lets you automatically ‘clip’ text, images and YouTube/Vimeo videos. The team is also working to be compatible with Flash files (given that a lot of online video/audio players are Flash-based), while the likes of SoundCloud, Slideshare and others will also get a look-in.

Gulla also confirms they’ll be bringing uploads into the mix too, and will enable connections “to your favorite cloud service,” which will mean you’ll be able to link up with services such as Google Drive and Dropbox.

Also, Keeeb doesn’t have native mobile apps yet, unlike Clipboard, which is something that will need to be remedied given that mobile is such an integral part of searching the Web these days. And there’s good news on this front – iOS and Android apps should be available within the next couple of months.

A good start for the recently relaunched Keeeb, however, and we’ll be keeping tabs on these guys. Meanwhile, check out this example Keeeb for yourself, or view the official promo video below.