Wikitude brought augmented reality (AR) to early smartphones with the Wikitude AR Travel Guide, kicking off when Google launched its G1 Android phone way back in 2008. It tapped the necessary components to make AR tick, such as a digital compass, GPS and accelerometer.

The Austria-based company has become renowned for its AR browsers across iOS, Android, Windows Phone and 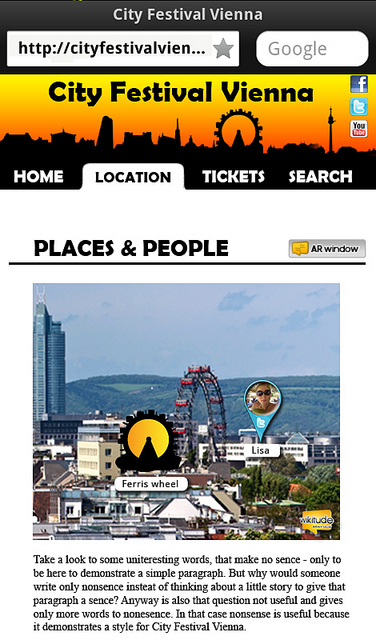 BlackBerry (see here), and now Wikitude Lab has announced that it’s taking its tech to the Web with its ‘AR Window’, which allows any mobile webpage to implement augmented reality, with a patent currently pending on the underlying technology.

Augmented reality is a term used to describe a live view of a physical, real-world environment that is augmented by computer-generated sensory input, such as sound or graphics. A typical AR environment has digital information transposed onto a real-world view.

So…what does Wikitude’s latest move mean, exactly? Well, mobile websites access via a native browser will be able to access the camera view of the phone on which it is being viewed, letting users view a live video stream with content augmented atop. This bypasses the need for a user to be accessing it via an AR-enabled browser.

“The opportunity of AR on the Web is enormous,” says Martin Lechner, Wikitude’s CTO. “While AR has been limited to app users only up until today, AR can now be integrated in millions of mobile websites out there allowing users to interact directly with the real world while browsing the Web.”

You can watch a live demo of Wikitude’s new AR window in the video below. Meanwhile, check out our feature on the past, present and future of augmented reality.