First I got her a cheap phone that cost me €60. She was 8 and within 3 months she lost it. I got her another one, this time slightly more expensive, at €100. She liked it a lot more, it had a touch screen, but one day she threw it into her bag, where it drowned and short circuited in orange juice.

By then she was 9 and spent a lot of time playing with an old iPod Touch I owned. I helped her set up Twitter, email and showed her how to install games. She loved it. So when the time came to replace her phone we went into town to look at phones. I dreaded spending more money on ugly phones that I knew she wouldn’t use. And then I suddenly remembered we had an old and broken iPhone 3G at home.

I had almost thrown away that old phone because the screen was cracked and it had stopped working long ago. But did you know that if you bring it to the Apple store and pay them €180 they will replace it with a brand new re-manufactured replacement model? You can’t upgrade to something new but you will get a perfect iPhone 3G back.

Now €180 is a lot more than a €60 throw-away phone, but I gambled that she would like this phone so much she wouldn’t lose it or break it as quickly as she did the other phones. So far (she is 11 now) my gamble paid off. She uses it all the time. She sends me photos of her homework when it is done, she sends me an email from her bed when she can’t sleep, which I prefer to shouting at me, which would wake her younger sister up. 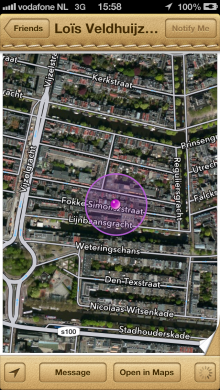 But the main reason why I love it that she’s has an iPhone, which makes it worth paying an extra €15 a month for an unlimited data subscription, is the Find my Friends app.

Not a day goes by where I don’t check her up on Find my Friends. Just to make sure she is, in fact, at school. Or arrived at that friend who she was going to play at. Or on her way home in the evening. Last week I had to go pick her up and she wasn’t answering her phone. I didn’t know the address and I didn’t have another phone number. Normally that would be a problem. You have to go home to find the names of the parents of her friend, then go find a number and ask them for the address, or call other parents to find out a number to call.

But no, I just opened Find my Friends, selected my daughter from the list, and drove to where she was. I rang the doorbell at the house where the map showed a little purple dot, and she opened the door.

A few months ago I was discussing kids with phones with another parent. They told me they thought it felt a bit weird to pay the extra €15 a month just so their kids could use Whatsapp or Twitter. Then I explained to them “I don’t pay the extra money for her. I pay it for me!”. The luxury of always knowing where your kid is, is worth so much to me.

If ten years ago someone would’ve told me that one day for €15 a month I would’ve been able to always know where my kids were, I wouldn’t have believed it. Now it’s possible and once you’ve tried it, you’re hooked. I’m sure that if my parents would’ve had the same option, no matter how poor they were, they would’ve done the same. And it would have made their life a lot easier too, believe me. :)

UPDATED: before every Android fanboy is going to comment that this is also possible on an Android. I know! It is just that I gave her an iPhone and I use ‘Find my Friends’.