Whoovie is a wonderfully simple iOS app that lets anyone write short movie reviews and share them with friends — that’s it. Somehow, out all of the useless entertainment apps that clog up Apple’s App Store, Whoovie manages to be surprisingly addicting and worth-while.

The app was created by Huge Design Lead, Thadeu Morgado, and Lead Product Developer, Rafael Mumme, in their spare time. Huge has quite a talented team, which is exactly why I ended up taking a look at the app in the first place.

Earlier today, TNW’s editors were chatting about Office Space, and I decided to review that movie first. Being a big fan, I gave it five stars, which delightfully shows up on Twitter using Unicode characters:

The app also lets you save movies you’re interested in to your “Watch List,” which was so well designed that I can actually imagine myself using it. For big film buffs, this is a great way to keep track of what you love, sharing your favorites with friends on Twitter and Facebook. 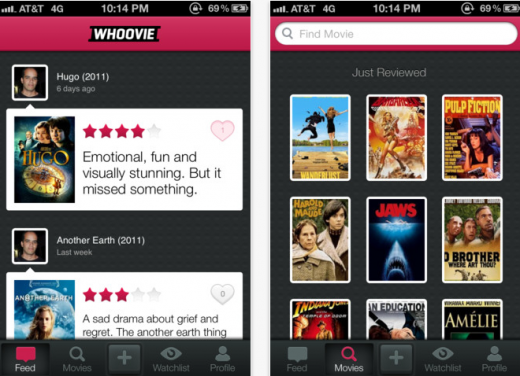 Overall, Whoovie really took me by surprise, and I definitely recommend giving the app a look if you have an iPhone, iPad or iPod Touch.

➤  Whoovie, free via the App Store