Good news for Led Zeppelin fans – the rock band’s back catalog is finally arriving on Spotify, a streaming exclusive for the platform. While the news wasn’t exactly unexpected, official confirmation came from Spotify’s Daniel Ek today, at a press event held simultaneously in London and New York, and this is another significant string added to Spotify’s streaming bow.

Indeed, from a consumer perspective, there’s little doubt that services such as Spotify offer great value for money – instant access to a gargantuan music library in the cloud for less than ten bucks a month (for the full shebang). But for artists, it’s a different story. 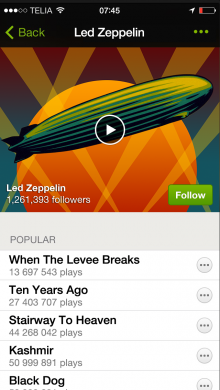 Many artists have criticized the service for not paying enough for access to their catalog of tunes, with Radiohead frontman calling Spotify “…the last desperate fart of a dying corpse.” Though Radiohead is available on Spotify, Yorke’s side-project Atoms for Peach isn’t, after he pulled the music earlier this year. Other notable omissions from Spotify include The Beatles and AC/DC, while Metallica finally caved in and launched on the service last December.

With Led Zeppelin now part of its equation, and free mobile streaming to boot after today’s announcement, Spotify just got that little bit more appealing. And with a back catalog of around 80 songs, that’s a whole lotta streaming to be had.