Few things get the tech blogosphere in as much of a tizzy as the rumored release of a new Apple product, such as expected for the iPad 3 next month.

When it will come out, what features it’ll have, the cost — every rumored detail is dissected, diced and sliced in every which way.

Shopobot, a startup that analyzes long-term pricing data to predict and suggest the best times to buy products, pulled six months’ worth of iPad data at our request and analyzed it, providing the graphics for this report.

The takeaway: Apple’s death grip on its product line means prices don’t ever change much until Apple decides to drop it.

On new iPads, average prices decline ever so slightly month over month. Used prices decline a bit more, but still not significantly, unless you wait a good deal of time. The best way to buy Apple products if you’re not concerned about having the latest new shiny product is to buy a used one – particularly a 64GB model – after the rumors begin.

With the iPad 2, you can see how huge the decline in price was for the 64GB and 32GB models – far greater than the usual drop. People who own the higher-end models, particularly the 64GB, appear to be the most interested in upgrading to the next model the second it comes out – so when that rumor came out last month, they became much more motivated sellers.

For new iPad 2s, though, the price drop still didn’t change drastically. That’s because those are generally via Apple or approved re-sellers.

“They keep prices on their store quite stable, and give notoriously small margins to re-sellers so there is not much room for competition,” said Shopobot founder Dave Matthews (not the singer). “It’s not until new models come out that you really start to see some movement.”

You can see over time, from October ’til now, the prices on new iPads hasn’t declined too much.

Used iPad 2s have declined in price more over that period:

“Deep drops on used prices are more likely to be real opportunities – a motivated seller who just wants it gone,” Matthews said. “These are the gems, and go to those who are on the ball and can recognize a great rare deal when they see it pop up.”

As you can see from all the dots of all the actual prices around the price decline arrow, there’s a great deal of fluctuation in the prices over that period of time. Finding those rare deals requires a combination of luck, timing and patience.

The Shopobot crew honed in on the specific price history of a used black 32GB iPad 2. Some people selling those are opportunists, believing they’ll be able to get as much for a used as they paid for it new. Others just want to get it off their hands. Prices dropped as low as $540 to as high as $650.


Play your cards right, and you can be paying up to $50 less.  (The shading shows the seven-day low and seven-day high prices for comparison.)

One Apple user who preferred not to have his name published has sold old Apple products on Craigslist – in fact, he sold an iPad 1 week before the iPad 2 was anticipated to be announced. “I knew that the iPad 1 would plunge in value,” he said,  “so I wanted to cash out as soon as possible.” 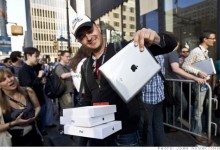 The latest rumors indicate March 7 is the date when the iPad 3 will be announced – which begs the question as to whether Apple will have a pop-up store at Austin, Texas, geek-fest South By Southwest, which begins March 8. Last year’s iPad 2 release brought scores of Apple fans to the Austin pop-up store and you couldn’t walk five steps in the Convention Center, it seemed, without running into someone who’d scored their new iPad there.

So what does that mean? It means if you don’t care about the 3 and will be happy with the 2, start shopping online now.

Oh! And black vs. white? Doesn’t make much of a difference in price, though the white is just a wee bit more expensive. So if you really want white and don’t mind paying $10-$15 more for the ability to get it, go for it. If you don’t care, look for used black iPad 2s – though sometimes white is cheaper.

“If you’re trying to buy and your favorite color is more expensive, it can be worth waiting – they alternate positions for best deal all the time,” Matthews said.

Will you be waiting on line to get a new iPad 3, which is rumored to cost $579? Or will you take advantage of the gadget-crazed and score a deal on an iPad 2?