Have you ever thought about aggregating your Instagram photos into a single representation of, say, your entire year? Perhaps you’ve considered a collage. Weevmee, an online app from the design agency HUSH Studios, has an altogether different take on image combos.

Instead of artfully combining recognizable images, Weevmee takes all your photos from a single year, or maybe those that share a particular hashtag, and does more or less the equivalent of throwing them into a blender and flipping the switch. The result is a texture rather than a traditional image — an intricate tapestry of colors derived from your pictures. 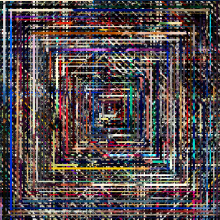 ‘We were hungry to create a single, personal manifestation of a year in photos — one that feels artistic enough to grab our attention, but contains enough clarity that it feels uncannily familiar,” HUSH creative partner David Schwarz told TNW.

“Weevmee is a cool digital product that allows users to participate in a unique design and creative process. The Web software harnesses the power of design, tech and personal Instagram photos and generates unique, unrepeatable, artistic imagery for everyone to share,” Schwarz says.

While it’s hard to make the case that the woven pattern (the weev, if you will) that emerges from the Weevmee algorithm somehow represents a definitive composite view of your photos — though actually, in a way, it does — it’s nonetheless fun and costs nothing to observe the singular, patterns that it dynamically generates. 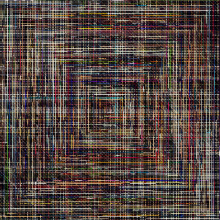 It’s immediately obvious that their complexity depends on the number of photos in your album. Weevs with large strokes generally signal fewer photos than more intricate ones.

Weevmee is still in beta and HUSH is looking to do more with it. Subsequent versions of the software will likely use additional criteria to compile the Weevmee image: Geolocation data could construct a workplace image, for example, while custom start and end timestamps could be used for a weekend event. 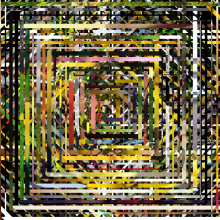 Schwarz also intends to integrate other photo sharing platforms into the mix, in addition to Instagram, and will be adding the ability to watch the creation of your images in real time.

“Design as a practice has retained its core methodologies for decades, but is able to mutate to incorporate new inputs. This is a great metaphor for our company, which has evolved — and continues to evolve — by challenging the norms of design and embracing the ever-growing palette of tools, talent and information,” Schwarz says.