If your service is on this logo map, feel free to add your url to the map on Flickr 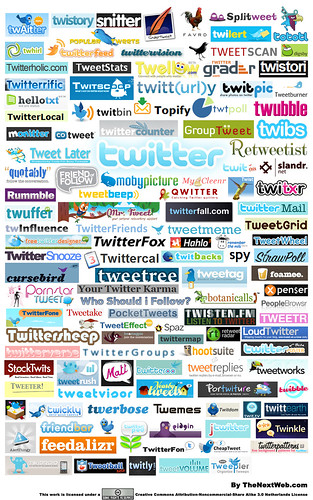 Twitter is becoming a phenomenon that cannot be ignored any more (here at The Next Web we’ve been covering a lot of Twitter news). People, businesses, marketing gurus, blogs, and traditional media are raving about it. News and stories are spreading faster than ever (plain crashes, earthquakes) and Twitter is growing at a very impressive rate.

The Twitter Business Model
Over the last few weeks people have been speculating about the business model of Twitter, about Twitter search becoming a threat to Google, about possible acquisitions. And it is unthinkable to not talk about Twitter when addressing the web, or in this case, The Next Web. Therefore we’ve decided to embrace Twitter as one of the topics during The Next Web Conference 2009.

Special Twitter Ecosystem session during The Next Web Conference
One of the key drivers for the growth of Twitter is certainly their API, and there are hundreds of Twitter services out there that build handy and nifty extra functionality on top of the Twitter platform. Biz Stone, co-founder of Twitter, once told me that the Twitter API generates 20 times as much requests as their web server. With all those Twitter added value services one could speak of a true ecosystem that has evolved around Twitter. During the conference we will address Twitter and its ecosystem.

We’ll have a 20 minute keynote on the Twitter ecosystem by Chris Sacca, seed investor and advisor to Twitter. This is followed by 10 mini-presentations of different Twitter apps. These presentations last 3 minutes and will contain maximum 5 slides, with 1 tweet per slide. This is a new format for presentations between a pitch and a demo, we internally call it twords. This forces people to get to the core of their business and ‘impress with less’.

If you have build a Twitter app and want to present at The Next Web, sign up here (you need to be a registered attendee to be considered for a presentation, so make sure you have a conference pass).

* If people talk about the … ecosystem, you know it must be a serious player. Not many companies can say that they have an ecosystem around them (although many companies try to claim they do). I can remember 3 true ecosystems that were widely acknowledged: Facebook, The Netvibes ecosystem (at the height of their fame) and the inventors of this phenomena; the Google ecosystem.