If there’s one place that you want to be for the launch of Mega.co.nz, it’s within Kim Dotcom’s mansion. That’s precisely where I’ve been today. Sure we knew that Dotcom was larger than life, but actually being at the mansion is a different story. Elaborate statues and expensive pieces of art, giant kitchen sized fish tanks and sprawling pools. It’s an incredible sight.

Early this afternoon, we sat down at a media round table with Kim Dotcom and talked about the past of Megaupload, the extradition, his plans for Mega going forward as well as some of the other services that the company has planned, and there’s much more than anyone probably ever imagined.

As Dotcom walked into the room dressed in the same outfit you may remember from the raids last year, there was an air of excitement. You could tell he was proud of Mega and how it had performed today. Inevitably, the first question that was raised by the media at the table was “just how popular was Mega this morning?”

Dotcom smiled. He didn’t want to share exact figures – and plans to reveal more later tonight at a special press event for well over 200 attendees, but did say that in the first two hours the site saw over 250,000 sign ups. Even better? They were overwhelmed by just how many people wanted to actually pay for the product.

On the timing of the launch, Dotcom said that “this should not be seen as us mocking Hollywood or giving the middle finger to them – we started developing this new business last September. We are not being arrogant, it’s us using our previous experience with Megaupload to have the best product out there” However, Dotcom admits he’s still angry about what happened on the 20th of January 2012 when the New Zealand police raided the mansion.

When asked about if he held resentment about the raid on his property Dotcom replied “yes, of course. We didn’t expect it at all and felt it was extremely unfair. 220 people lost their jobs [from Megaupload] overnight. We couldn’t pay them.” He went on to say that he thought the anger would take a long time to subside – certainly at least not until the extradition case is closed.

As for whether Mega would run into similar legal problems, Dotcom said that it was entirely different from Megaupload, all the way down to its core code. The site was built purely in HTML5 – some parts of which aren’t even in the official specification yet. Dotcom touts Mega as the first site in the world to use them. This is one of the reasons that Mega only supports Chrome right now – many of these new features in HTML5 aren’t supported by any browsers yet, but Chrome is ahead of the pack.

Building from the ground like this also has its benefits for server side security. Dotcom pointed out that “Mega doesn’t use any existing technology. The servers were built from the ground up so there is no way that they can be exploited because it’s our own technology.” Additionally, Kim said that “everyone involved in building the site has a background in information security” which meant a lot of care had gone into building security in from the start.

Not only is the underlying technology different, the site has been built with legality in mind. Ira Rothken, one of Mega’s top lawyers said that they designed the site “pixel by pixel” to be within the law, and they were certain that the new site operates within the confines of it as well. Dotcom added that Mega is the “most legally scrutinized startup” in history and said that “any legal challenge against us will be very difficult.”

That said, Dotcom’s biggest worry is if the government will ever leave him alone – he knows that Mega is being closely watched, and now that it’s no different from the likes of Dropbox or Skydrive. He wonders if the government will allow him any peace once the case is out of the courts. “Will they ever leave us alone? Or will they find something else, create something else or continue to [perform] surveillance on me.” He says he is “deeply worried about that.”

In case you don’t believe him, he continued to detail real world issues he was facing. He gave an example of what’s happening to him right now. “When guests of mine come to New Zealand and fill out quite honestly on their customs forms that they are staying with Kim Dotcom (this is journalists, documentary makers, music producers and even Hollywood producers) they are held at the airport for hours.” But it gets worse, “they are strip searched  their luggage is unpacked and screened and one had to open their laptop, turn it on and show them the digital contents.” This happens all the time, says Dotcom.

When prompted on the screenshot of Megamovie that was uploaded on his Twitter account yesterday, Dotcom opened up about the story behind it. It turns out that screenshot was a fully working version that existed just days before the raid on his mansion last year. He says that the intention is to release a similar service at some point, alongside Megakey, and he promises that it will “change the landscape of movies.”

To explain Megamovie requires an understanding of just how Megakey works. It’s been somewhat of a mystery until today, but Dotcom divulged everyone at the event this afternoon. We know that Megakey replaces advertising online through a piece of software that is installed on end users’ computers, but the specifics of it are a bit more complex. Dotcom says that Megakey only replaces “10% of all advertising” and will only target “the large players like Google and Yahoo. We can justify that by looking at how Google is linking to all content – it really wouldn’t even hurt them.” He says he can justify doing this to large providers since they are in “the same boat as Mega – they are the biggest piracy site […] and could be indicted just like we were.” 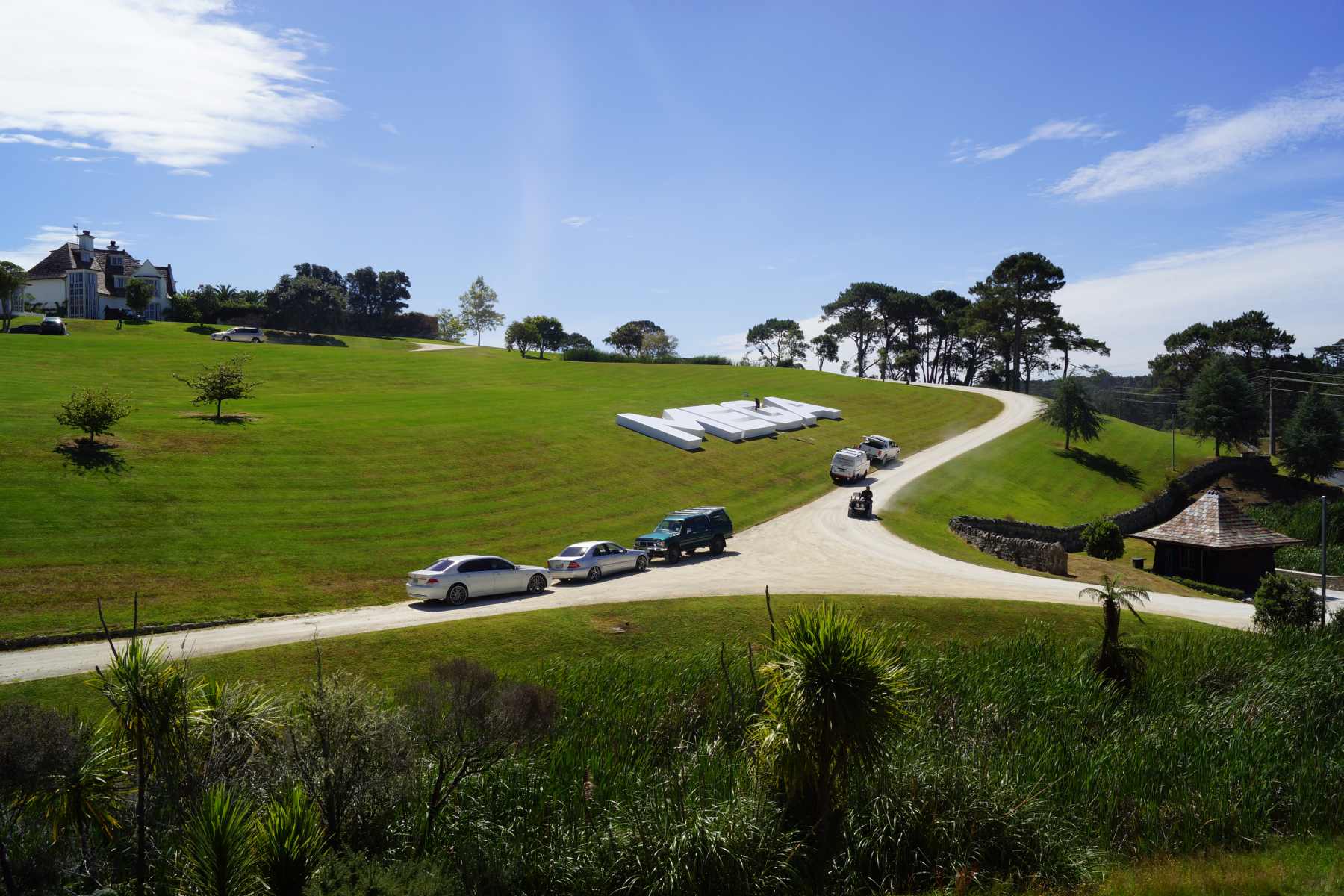 Megakey is the idea that perhaps advertisers have got it all wrong. Instead of paying content producers to have advertising on their websites, they want to pay the users for their eyeballs. Previously — during Megaupload’s reign and just before the raid — Megakey was in a closed trial with around 2 million participants that received free premium services on Megaupload in return for them replacing Google’s advertising with their own.

This raises a question, though — How long does it take before this starts hurting Yahoo or Google and they decide to come after Megakey? Rothken chimed in again at this point and pointed out that “consumers have the right to control their viewing experience online. If they choose to go to our website and download Megakey, they are within their rights to do so.” Rothken said that “we don’t force them to install it, they choose to, which means there’s no legal issue. It’s just like using Adblock.”


A preview of tonight’s event

Megakey will only replace advertising on major sites, and only on piracy-related searches. The biggest concern at the round table seemed to be that such a service could actually take money away from publishers, but Dotcom says that the ads will only ever be replaced on actual web searches, not on third-party websites.

Dotcom says this is a space to watch closely in the near future, and he thinks that it will be “a war — a fight for the eyeballs [of internet users].” He thinks that the advertising war will shift from the web to actual desktops very soon. This is where Megamovie (or whatever it will be called) comes in. In return for users’ eyeballs the company will give some sort of gift currency that allows users of the product to watch movies and other premium content online for free.

There were no dates or specifics given for the launch of Megakey or any associated services, but it certainly sounds like it will be soon. Dotcom doesn’t want to do the movie component alone, though, and he says that previous to the raid they have had Hollywood producers such as Lawrence Bender (the producer of Kill Bill 1 and 2) come and stay at the mansion to discuss the possibilities of what they can do with Megakey and the new license model. Dotcom added that they don’t see Megakey as “stealing” from Google and others, as their goal is to “reshuffle advertising income” among the big players.

On the topic of New Zealand, Dotcom has big ambitions for the country. He says that there are multiple goals for the company in New Zealand:

We wrote previously about the problems New Zealand faces to become a  “cloud haven” and how the Southern Cross cable is one of the major stumbling blocks due to the lack of throughput combined with the price of traffic. Dotcom says that he thinks New Zealand is a “digital wasteland” due to the way that one company has a monopoly on all throughput into and out of the country. Mega wants to fix that.

He likened the situation with the Southern Cross cable to that of a “ten lane highway of which only one lane is being utilized [for the sake of profit]” and that they are using their stranglehold on the market to take advantage of the public. Mega wants to change the situation but can’t do it alone. As a result, Mega only hosts one rack of servers in New Zealand due to the sheer pricing of a megabit of throughput. But the company hopes the situation can eventually change. Dotcom wants the public to know that last year’s statement of “free internet for all” was not a marketing gimmick but rather it a goal for him. How that will turn out remains a mystery for now.

As the round table wrapped up, Dotcom said that they were overwhelmed by the response of people to the launch of Mega today. Over the last 48 hours, 100 journalists were given early access to the site and the buzz was incredible. He’s relieved, stating that now that he’s got a product that speaks for itself behind him people will know that “he’s not just tweeting big words.”

We’re going to be on the ground at the press event tonight covering the developments as they unfold – expect some crazy stuff to happen. While we were at the mansion, we saw cheerleaders, helicopters, a massive stage and much more. Even if you aren’t sure if you’re a fan of what Mega is doing, this will be a press event like no other.

Image of Mega logo on lawn thanks to Paul Spain