This article was published on December 5, 2017

Most of us view stress as that wicked ‘thing’ that has a habit of appearing at the wrong place at the wrong time — like any sane person would. However, one Dutch startup begs to differ.

Stressjam wants to change people’s mindset about stress and help them reap the positive benefits stress can bring. They’ve developed a fun and engaging VR game that uses real-time biofeedback from your personal stress response as the “joystick” to control your adventure. It also doubles as an undercover tool to turn your anxiety into “superpowers.”

Founded by the psychology practice Maarsingh & van Steijn, Stressjam is the first product to come from their “Viral Innovation, Technology, and Analytics lab,” known as Jamzone.

The game is intended for anyone wanting to learn how to deal with their stress more effectively: think employees, nurses or doctors, students, or those suffering mental illnesses such as anxiety and depression. According to the science behind Stressjam, it’s all about getting the optimum balance of hormones, explained Bernard Maarsingh, Stressjam’s Chief Science Officer.

Cortisol, the ‘stress hormone’, is great at helping your body for exceptional performance, nevertheless it puts all other functions ‘on hold’.

On the other hand the ‘brain grow hormone’ DHEA, helps your brain to become stronger from stressful experiences, and it eliminates a number of adverse effects of Cortisol. So, you really need both hormones. In the proper balance, you will ‘bloom’ under stress.

Intrigued by the concept, we invited Stressjam to visit our Amsterdam HQ to find out whether the game could deliver on its promises.

As a person who, admittedly, becomes stressed quite easily, I was excited to finally put my anxiety to good use — and potentially learn some better ways to control it. I was pretty skeptical that a game could help manage my anxiety, and I thought the idea of wearing a sensor around my chest was a little invasive. But nevertheless, I was still keen to try it.

My colleague, Már, also had a similar mindset. “I’m a pretty stressed person by nature and have had to work on it in the past. I was really excited to try a fun way to manage my stress, through a VR game, even though it sounded a bit too good to be true,” he explained.

The set-up consisted of a VR headset, headphones, two hand controllers, and a heart rate and breath monitor that fits tightly around your ribs. The game itself is set on a desert island that reminded me of my old favorite game, Crash Bandicoot. I didn’t want to be the first person to make a fool of myself, so thankfully Már volunteered to be TNW’s leading guinea pig. 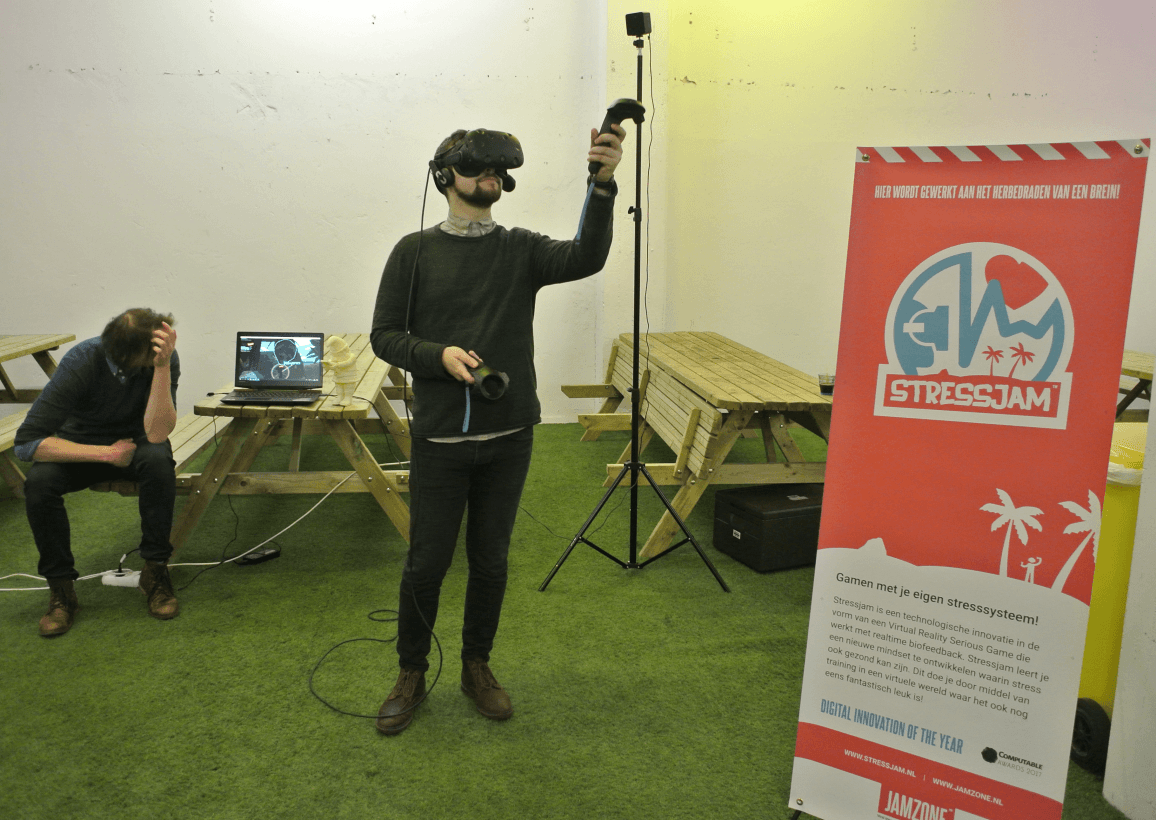 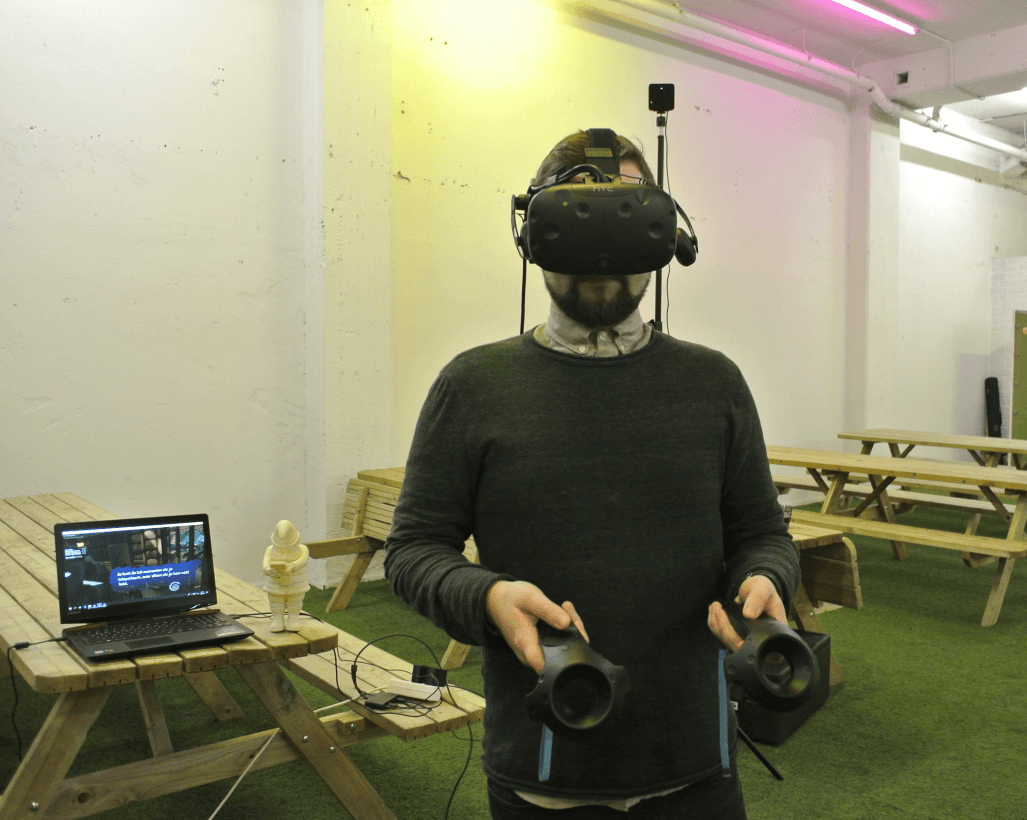 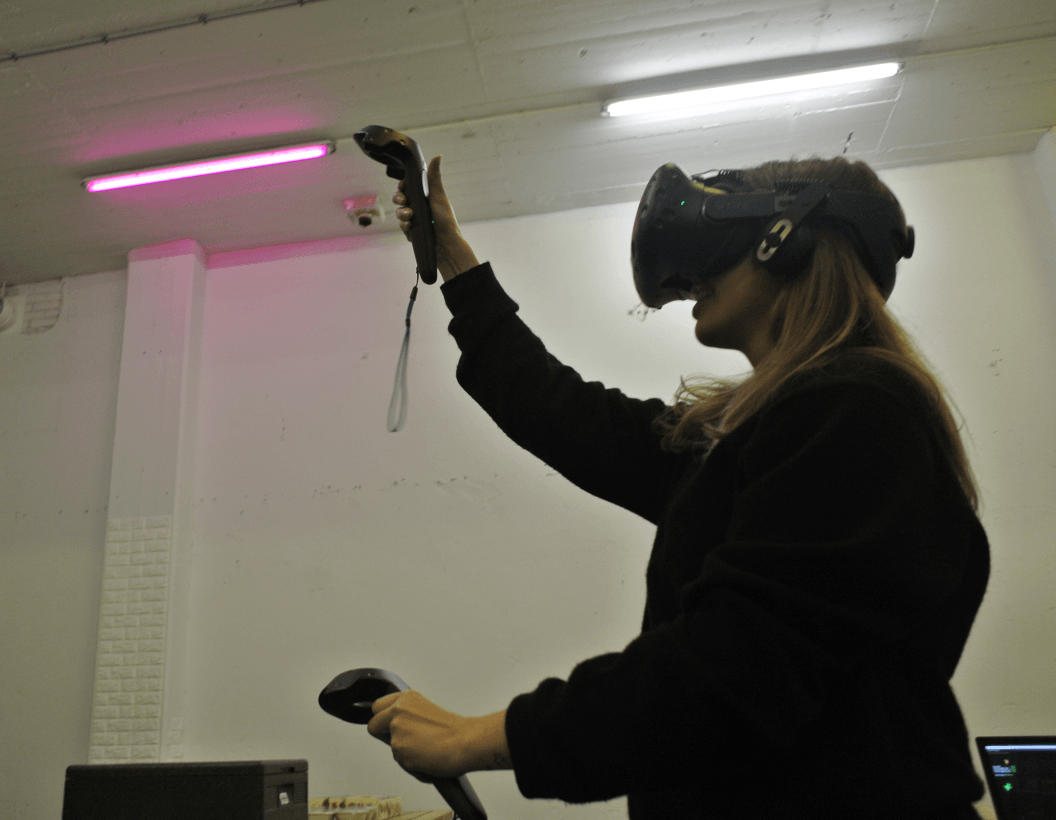 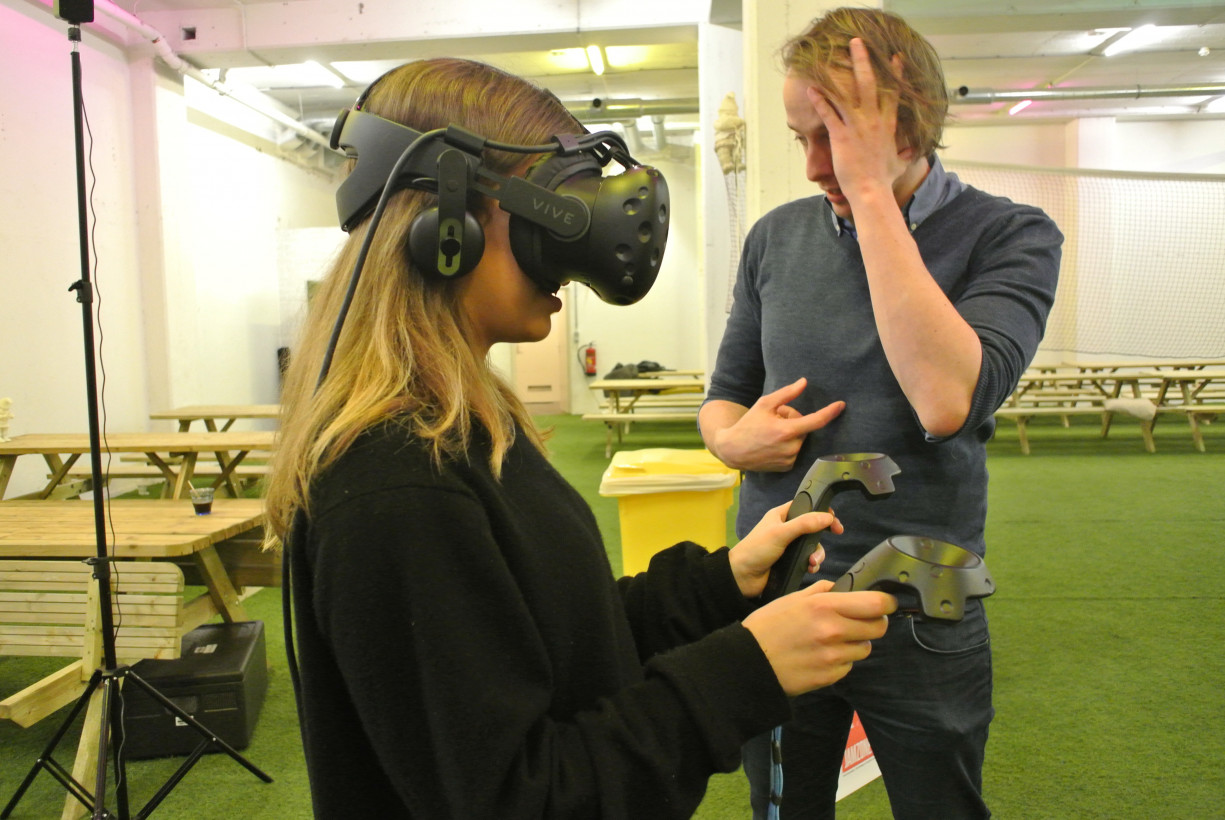 He decided to play the introductory version to get his bearings on the island and learn what he could do with his stress. One of the most stressful tasks he faced was getting attacked by a virtual swarm of bees. The bees were triggered by Már’s stress, so to get rid of them, he had to try and calm down. Taking deep breaths or thinking happy thoughts usually did the trick.

The Stressjam team were all quite impressed by Már’s ability to be calm, and overall thought he had no problem managing his stress.

Then it was my time to… stress. Due to some time restraints, I decided to try the time-sensitive version of the game. My objective was to get as far possible within five minutes (which wasn’t very far).

As it was my first time playing a game in VR, I found the quality of immersion incredibly convincing, as well as the way I could interact with virtual objects. Being scared of heights, I got the same feeling in my stomach crossing a virtual bridge as I get in real life. I couldn’t look down!

Each task required me to be completely aware of my stress level, visible on screen, and use it as a tool. Some tasks required calm and for others, I needed to rev myself up. My favorite mission was climbing some vines hanging from a rock face. If I was calm, I could climb the green bordered vines and if I was stressed I could climb the red.

It was really challenging trying to remain either calm or stressed to make it the whole way without falling. I noticed it was a lot easier for me to be stressed than relaxed. No surprise there.

Overall, the game was a great way to help change my conceptualization of stress. By realizing that it was limiting my success in the game, and working out ways to subdue it, such as laughing, for example, I became more conscious of the fact that stress is just temporary. And finding ways to overcome it is incredibly satisfying!

Már was also pleasantly surprised. “I thought it was great fun but what surprised me the most is that I actually want to try it again. I only played through the first few levels but I can definitely see it helping people to manage their stress. We see a lot of overly hyped VR products, but I think that Stressjam might actually be onto something,” he explained.

Recently winning the Computable Awards 2017 in the category ‘Digital Innovation of the Year’, a significant ICT prize in the Netherlands, interest in Stressjam has quickly taken off. The team has been busy exhibiting the game to a range of different groups, including carrying out several pilot studies in hospitals.

While I can’t immediately see a dire need for Stressjam in our workplace, I can definitely see how a tool such as this could benefit those in high-stress jobs, such as paramedics, or those suffering from mental health issues. By practicing how to adjust your reaction under stress, these skills could undoubtedly be used the next time things start getting too much in real life.

The takeaway we got from trying Stressjam: begin to use stress as a tool rather than always seeing it as the enemy. Make it work for you, instead of working for it.