From next week, engineers working on Virgin Atlantic aircraft at Heathrow will be conducting an eight-week trial of Sony’s SmartEyeglass Developer Edition and SmartWatch 3, along with tablets and smartphones from the company. 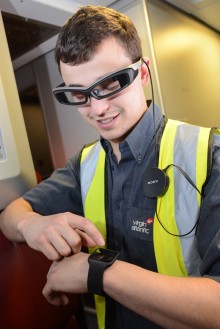 The company says using the smartglasses should remove paper from some engineering processes and reduce the number of journeys engineers need to make between aircraft and technical control.

During the trial, Virgin staff will receive notifications about job allocations and changes to tasks on the SmartWatch 3. They’ll also use the SmartEyeGlass to take photos and video, which will be fed to an app on their smartphones.

Live video from the smartglasses will also be streamed to office-based engineering staff so they can offer speedier technical assistance.

It all sounds like a pretty sensible way to implement new smart devices in the work place. Other companies like Vuzik have been putting smartglasses in the hands of engineers for some time.

The big question is whether Virgin will stick with the technology when the trial is up or if this is just another clever bit of promotion.

Read next: See What It’s Like to Wear Sony’s Clip-on Heads-up Display