Smartphones these days can do all kinds of wonderful things – they can play music, broadcast TV, book taxis and publish blog posts. Oh, and they also enable us to make and receive telephone calls, lest we forget.

Indeed, when your phone rings, the little LCD display is a great way of knowing whether to accept or ignore a telephone call. If it’s your spouse, you may want to accept it, and if it’s your mother-in-law you may want to, erm, accept it too. Heck, you can even set ringtones to specific contacts in your address book, so you can hear who’s calling you. But what about when your phone is in silent mode?

That distant buzz as your phone vibrates against the table while you try to study doesn’t give too much information away – unless you have this little Android app installed, that is.

“We developed an app called ViBe, which takes the ringtone paradigm and applies it to vibrations,” says Sargon Benjamin co-founder of Base 2 Applications, the company behind this app. “It’s great for the deaf community and anyone who generally keeps their phone on vibrate to avoid pesky situations. With ViBe, you can feel who’s calling.”

Yes, iOS 5 has a customizable vibration feature too, and there is already the likes of WhoIsIt for Android which creates vibration alerts for Gmail, SMS, MMS, Google Talk and Google Voice, but ViBe has plans to take buzz alerts to the next level.

ViBe launched in October last year, and in the six months since, it has notched up in excess of 500,000 downloads. Since 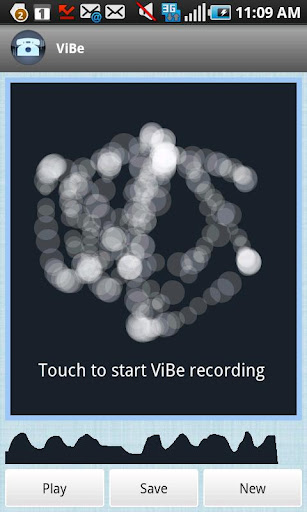 its initial roll-out, it has introduced new tweaks to the app, and it now lets users create their own custom vibration in addition to the built-in options, letting you ‘draw’ a vibration on your screen.

Also, now you can simply swipe left or right on a contact’s name and an SMS window pops up to tell the contact what ViBe they’re currently set to, which might earn you some brownie points if you set your other half’s ViBe to ‘Heartbeat’.

Currently ViBe only supports incoming calls and text messages, but looking to the future, Benjamin says that they’re adding a slew of buzz alert features to the app, including tweets, Instagram notifications, Facebook and email.

“I’m always in situations where someone’s ringtone goes off obnoxiously – at a work meeting, at church, at a movie, the list goes on,” says Benjamin. “Those situations tend to be humorous too. I envision a future where instead of someone saying ‘please put your phones vibrate’, that the common term will instead be ‘please put your phones on ViBe’. You see, ViBe respects the privacy of a situation while still letting you know who’s calling and texting, without having to look at your phone.”

In terms of when the vibrations will be rolled out to include other services, Benjamin was non-committal. “We’re very excited about this as it would be the first app of its kind to let users customize the vibration patterns for social media alerts,” he says. “I can’t say too much about our release schedule, but this summer is a ballpark estimate.”

Based in Santa Clara, California, the two founding brothers – Sargon & Paul Benjamin – bootstrapped the startup themselves and ViBe is the result of a hackathon they entered last year. They now run a small team, creating mobile solutions on iPhone, Android, and Windows Phone.

ViBe follows a freemium model. Users can access base functionality for free and they can access the full app feature set which gives them more ViBe tones and the custom ViBe feature for $1.99. “This at least opens the door for people to use app and see if it’s for them,” adds (Sargon) Benjamin.

ViBe is currently running a video contest, asking its users to submit skits about ViBe in action, and you can view one of these submissions below.