Wearables do a serviceable job keeping track of your steps and calories spent. But, when it comes to calories consumed, that still involves whipping out an app and manually adding your food and beverage intake. While automatic food-tracking might take a while, the Vessyl cup knows exactly what you’re drinking and what it means to your health. 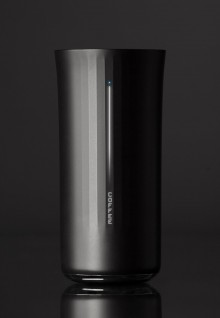 The result of a partnership between Mark One and Fuseproject, and designed by Yves Behar, the Vessyl is a smart cup that not only recognizes what you’re drinking — from the brand of cola you’re enjoying to mixed drinks that include alcohol — but knows the total amount of grams of sugar, caffeine, protein, sodium, fat and calories that are in the drink you’re about to consume. It even tracks how much you drink during the day. It calls its hydration tracker Pryme. It helps you reach peak hydration during the day. It does all this with a cup.

The cup itself is filled with sensors and a display that runs up the center of the Vessyl with a meter that measures your daily progress of a pre-determined value about what your about to drink. If you want to know the sugar content, it’ll tell you. The same with the rest of the values mentioned above. It’s the instant gratification of knowledge. For more long term and modular information there’s a companion app.

Using Bluetooth Low-Energy (BLE) the cup talks to the app throughout the day about what you’re consuming. The data is presented beautifully via circles that expand as you consume more of a value like calories, protein or fat. An outer circle of each value is your daily goal. Set a goal to drink fewer calories and you have a quick visual cue on where you are within a day. “The Vessyl itself is really about what matters to you. If you want to lose weight, it might be calories,” says Justin Lee, CEO of Mark One.

Even the lid is innovative using a magnet that slides out of the way while you drink. But all that design and technology comes at a cost. Right now you can pre-order the cup for $99 to arrive in early 2015. But once it hits retail that price doubles to $199.

But if you’ve been throwing your cash at wristbands that count your steps and little else, a cup that almost magically knows what you’re drinking and keeps track of all the nutritional content of the beverages you consume might seem like a deal.