At the Open Mobile Summit yesterday, Scott Kveton, CEO and co-founder of Urban Airship explained to the audience how to give ‘Good Push’.

The firm is known for enabling developers to use push notifications and in app payments and Kveton was spreading the word about this function as well as launching a guide on how to do it well.

Push notifications are like pop-ups for your mobile device. A short message appears on your screen when new information is available or a brand or company you have opted-in to hear from thinks there is something you should know. Social networks and games also use this function to let users know when they have a new message or if an opponent has made their move and it’s time to take a turn. 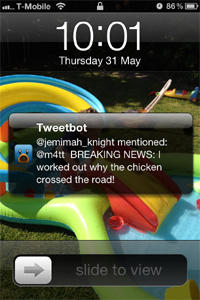 Though most early adopters are aware of how they work and their uses, many European brands have yet to pick up on the idea. Kveton feels that this might be related to past experiments with text messaging. “They haven’t quite grasped it yet and I think the problem is that they tried to use SMS and it was cost prohibitive that they couldn’t do it,” he said.

“We’ve talked to a bunch of banks here in London and they see a huge value in sending notifications to users with information like, ‘you’re getting low on your balance’, ‘your statement is available’. They’ve found that at 18p (USD 0.27) per user, per month, that drives so much cross-promotion,” Kveton continued. “So if they can find a cheaper, better way to engage users with mobile messaging, that would be fantastic and that’s why they’re starting to look at it.”

To accompany the guide, Urban Airship has also released the results of its first Good Push Index. This information quantifies engagement and retention gained through smart use of push notifications.

The results sound positive according to the company which says that in the first month after a user downloads an app, when the majority of users typically stop using it, those who have opted-in to receive push notifications have a 26-28 percent higher retention rate than users not receiving push notifications.

In later months, users receiving push notifications are retained at double the rate of users who do not receive notifications. In addition, opted-in users also open apps at more than double the average rate of those opted-out during the first month and this engagement rate multiplies over time.

“With the cost of acquiring app users trending well above a dollar, app publishers must also invest in retaining these users, and devote a budget for push messaging for this purpose,” said Scott Kveton, CEO and co-founder, Urban Airship. “At two cents per user per month for unlimited push messaging we offer app publishers an affordable and effective way to keep their audiences engaged and eager for more.”

To provide a longer-term view of push messaging’s retention lift, the company analyzed customers with at least 10,000 app opens in August 2011, reporting on the top 10 performers’ six-month retention rates.

The data in the Good Push index spans apps from a wide variety of categories including media, entertainment, finance, music and education with the main focus on the top performers that use this function.

For the next edition, more data will naturally be available and Urban Airship is inviting customers to submit their app for possible inclusion in future indices.

In the coming months, Urban Airship will be joining the league of tech companies based in East London. A location for the offices has not yet been chosen, but Kveton is excited about not just making he move but providing a service to the area. 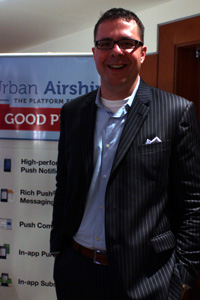 “Our headquarters is in Portland, Orgeon, and there’s a really active tech community there. We have a big extra space in that office where we host events and speakers when they come to town,” explained Kveton. “So that’s what we’re hoping to do when we come here as well which is not only engage with the tech community but also help with what’s happening here.”

The London base will not just be a satellite extension of the headquarters in Oregon. “We’re going to have a pretty significant team here. I’d like to grow this,” confirmed Kveton. “About 20% of our revenue is coming out of Europe at the moment so we need to staff accordingly.”

Urban Airship will be hiring here too across sales, business development, operations and support. “We really want to create a microcosm of the business in the same way we have in our San Francisco offices,” says Kveton.