Whilst some of us have proper jobs to go to, it seems others out there have things a little too easy.

New York comedian and filmmaker Mark Malkoff set out to test Netflix’s $7.99 unlimited streaming deal to the limits, by watching 252 movies between April 16 and May 15, amounting to 404.25 hours. “I’m quite certain my Internet service provider hates me,” quipped Mark.

Using a quick bit of mental arithmetic – okay, okay I used a calculator – this works out at a mere 3.2 cents per flick. If nothing else, this certainly proves there are novel, albeit time-consuming, ways to get maximum bang for your VoD subscription buck. At an average of 8 movies a day, we have to say that’s pretty hardcore.

Mark watched the vast majority of the films in his apartment in the Queens area of New York, and he also tapped the mobile 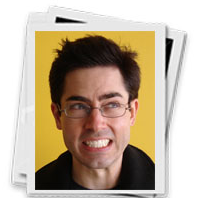 Mark says he received over 500 Netflix film suggestions from people on Twitter and Facebook, and in the first week he didn’t leave his apartment for 155 hours straight. In a quirky turn to this sordid movie-watching tale, actor Andrew McCarthy did live commentary for Mark for St. Elmo’s Fire, a movie that McCarthy starred in way back in 1985.

“Good thing there’s unlimited Netflix streaming,” says the comedian. “Otherwise I would have had to subscribe to the 252 disc-at-a-time plan.”

If you’re curious to see a complete list of all 252 films Mark watched, this can be found here. There are some crackers in there, but I’m not sure I could even get through that list in a year, let alone a month.

Mark has previously starred in a video in which he visited and consumed purchases at all 171 Starbucks locations in Manhattan in less than 24 hours. He also lived and slept in an IKEA store in Paramus, New Jersey, for a whole week.

Meanwhile, here’s Mark’s little compendium of clips taking us through his 30 days of movie-watching bliss/torture.