When Uniiverse launched its iPhone app back in October, we noted that it was essentially a different service to when we first covered the Toronto-based startup way back in February 2012. But the basic premise remained the same – get yourself away from your computer and out into the local community – meet people and do things.

Now, the so-called ‘eBay for activities’ platform is available for Android too. Co-founder and CEO Craig Follett tells us that since its arrival on iOS, he’s seen that its mobile users are “exceptionally engaged”, logging in at least ten times more frequently per month than their Web-based counterparts. “This figure is growing every month,” he says.

Uniiverse automatically taps your location to surface events and activities that are listed in your locale. The description, price, date and location are all given in the event preview, and you can click through for more information and book tickets. This could be anything from yoga or fashion photo classes, to 5-a-side football. 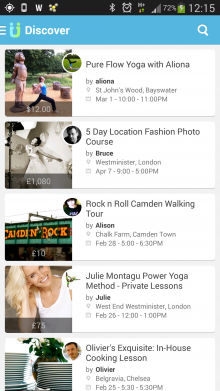 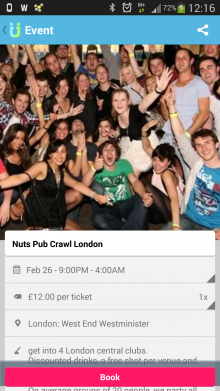 If you choose to sign-in using your social network credentials, Uniiverse can recommend events based on what you like, what your friends are doing, and other ‘signals’.

Interestingly, Follett says the Android app has been built by developers who “draw experience from building renowned apps”, including Tumblr and Readability.

Uniiverse is available to download from Google Play now.