EE has announced that its 4G users in London are set to get a speed boost from today, following the switching on of its ‘4G+’ network in the capital.

Also known as LTE-Advanced (or LTE-A), the faster network will offer downloads speeds of up to 150Mbps, the company said. Initially, the 4G+ service will only be available to users in central London, but it’ll be expanded to cover Greater London and “the UK’s busiest cities” in 2015. 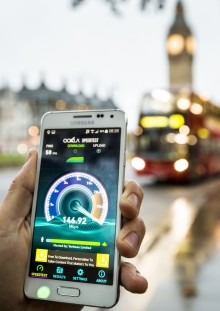 Average speeds should be around the 90Mbps mark for users with a compatible (Cat 6) device and plan (4GEE Extra or Coroporate 4GEE). Devices like the Samsung Galaxy Note 4 and LG G3 currently support Cat6 LTE-A, but the new iPhone 6 and 6 Plus only support up to Cat4 (and therefore only a single band at any one time), so won’t benefit from the additional boost.

“The new speeds are achieved through ‘carrier aggregation’, combining 20MHz in each of the 1800MHz and 2.6GHz bands, enabling a theoretical maximum speed of 300Mbps,” EE said.  While a theoretical 300Mbps would be nice, 150Mbps should be just fine for now.

The knock-on effect of additional spectrum is that even users on regular or ‘double speed’ (up to 60Mbps) connections should also see a slight increase in average speeds.

Why Apple left out support for a higher-speed network option is anyone’s guess, though.