Dixons, the domestic computing and electronics chain will close more shops in the UK according to a report in Proactive Investors today.

The firm, which also owns Currys and PC World, has already shut down more than 50 locations in an effort to reduce costs and will now be cutting back its stores further from 557 to around 400. The closures come as part of the firm’s Renewal and Transformation strategy.

Through this plan, the company says that it is doing well across the UK, Ireland and Northern Europe. The total cost reduction required is around the £90 million ($141m) mark over the next two years through the closure of stores. 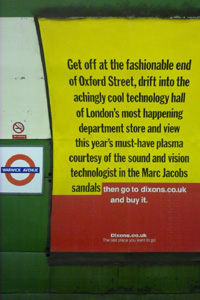 The current economic climate in southern Europe appears to be taking its toll. Dixons issued profit warnings last year and as Proactive Investors reports, there were losses of more than £30 million ($47m) in Italy, Greece and Turkey.

Figures for the UK and Ireland were boosted with the launch of the new iPad though seeing a surge in profit to £79 million.

It’s notable that the iPad release should be helping the company along after its CEO,  John Browett, left Dixons earlier this year to join Apple.

Chief executive Sebastian James is ploughing ahead with the transformation, noting that it is a rocky path, but one that is necessary. He said, “Against a tough economic backdrop, we have continued to deliver on a clear plan to transform the business and today we are setting out our three strategic priorities to further improve our market position and build a business that is stronger, more profitable and sustainable. The new financial year has got off to a good start with the trends seen in the final quarter of last year broadly continuing.”

The UK high street is taking a knock when it comes to familiar brands. HMV reported £36 million ($56m) in losses late last year and has been considering offloading live venues too.

Consolidating locations for Dixons brands might appear to be a physical loss, but as more consumers purchase electrical goods online, scaling back in the real world seems to be the best solution to making financial savings in the long run.