It was perhaps one of the worst kept secrets in tech (besides, perhaps, Microsoft’s Yammer acquisition), but Uber has FINALLY landed in London. Properly.

The private car hire company, headquartered in San Francisco, first made its intentions for the UK capital known back in March, announcing simply it would hit the city before the Olympics. Then earlier this month Uber soft-launched in London, with a low-key “secret” testing phase, involving former Dragons’ Den judge Richard Farleigh.

But now, the private ‘driver-for-hire’ startup has properly launched in London and will be ramping up its efforts in the city moving forward.

Uber: How it works

If you’re new to Uber, here’s how it works. You download the Android or iOS app, sync up your credit/debit card and then beckon a 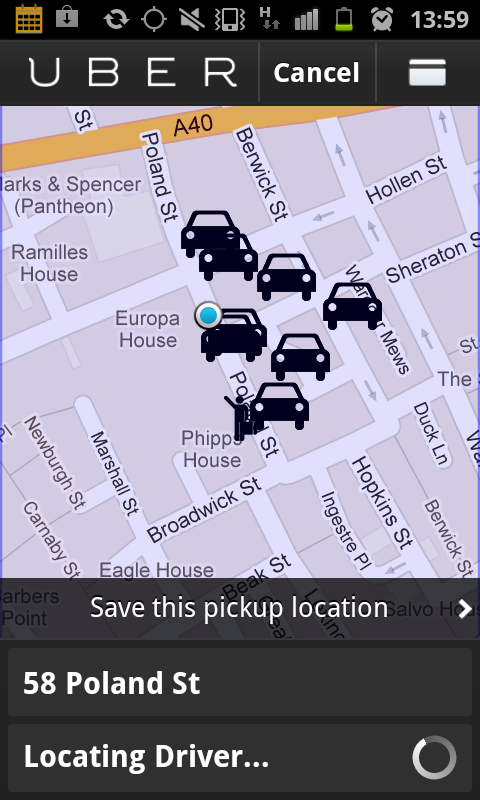 Mercedes, BMW or Jaguar from one of the ninety or so that are signed up with Uber at launch. Naturally, this number will increase in line with demand.

Now, Uber doesn’t own the cars. They personally vet and interview drivers who work off their own back, or sub-contract drivers from other car firms. It’s clearly a lot more cost-effective going into launch working in this way, rather than having the cost of a fleet of fancy automobiles to manage.

Your mobile device should detect your location instantly, which leaves you to simply beckon the driver with one click.

With my experience, however, the GPS had an issue detecting my location, and I had to manually enter the address. I’m assured by the good people at Uber that this was a known issue and will be rectified easily.

However, the driver was very responsive and everything worked flawlessly thereafter. When you arrive at your location, the money is taken automatically from your card, with a PDF receipt arriving in your email inbox.

I know what you’re thinking – there are plenty of taxi start-apps (as I like to call them) doing the rounds a the moment – perhaps Hailo sprung to mind, or maybe GetTaxi. But Uber is all about the experience rather than simply getting from A to B – you have a nice car, plenty of legroom, bottles of water and magazines at your disposal.

At the time of writing, Uber wasn’t actually any more expensive than a standard black taxi – a fare from Balham to central London cost just south of £30 yesterday. But, we’re told the prices will be going up slightly some time after launch, they have to make a living, after all.

The Next Web was given the chance to test out Uber yesterday in London, and we were whisked over to meet CEO and Co-Founder Travis Kalanick.

Whilst Uber has been gaining traction for the past two years in most of the US’s main cities, as well as in Canada and France, Travis was quick to point out that London has been on its radar from the beginning. “In many ways, London is the most sophisticated and competitive transportation market on the planet”, he says. “So the preparation for London has been the last two years.

Check out our interview with Travis below (apologies for the background noise…), where he discusses what Uber actually is, who it’s aimed and the future plans for the rest of the UK and beyond. “We’re going to every major city in Europe,” he says. From a local perspective, that should mean throughout the UK – Birmingham, Manchester, you name it.

Looking to the future, where does Travis think they’ll be a year from now? “I think London will be one of our biggest cities,” he says. “In terms of where we’ll be in a year, well, the growth is really steep. We’re doing 20-30% growth a month. We’re just trying to strap ourselves into this rocketship.”

Oh, and we also managed to condense the 35 minute drive from South West London into less than 60 seconds for this flick…