It looks like Twitter is experimenting if they are able to predict which tweets are going to go viral with a new account that’s extremely similar to previous experiments @magicrecs and @eventparrot.

A mysterious new account (@magicstats) has appeared with a bio that reads as follows:

I favorite the best tweets I see in real-time

Despite the account being protected, we’ve gained some insight into how it works over the last few days. When a user tweets something that the service thinks will go viral, it favorites the tweet within a few minutes of it being sent. In both instances where @magicstats favorited our tweets, they received well over 100 retweets within a few hours. 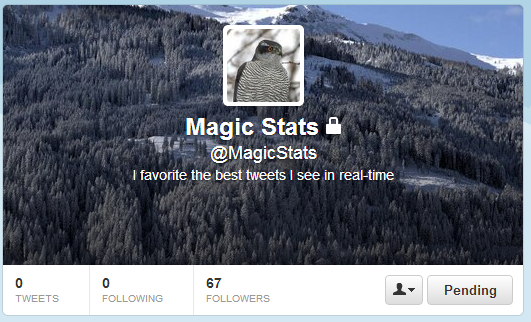 We’re not 100% sure this is an official account yet, but the design and wording of the account similar to that of the previous experiments. The functionality that’s being tested here could be a response to Favstar’s service, which allows you to track how far a tweet travels and helps show just how popular a tweet is becoming before it goes viral.